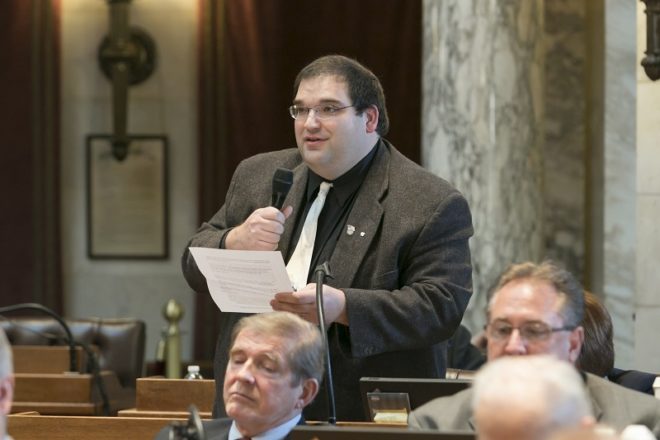 Andre Jacque is prepping for his fourth election day since April.

The voters in the small northeastern section of Manitowoc County helped push Rep. Andre Jacque on to a 329 vote win against challenger Alex Renard in the May 15 Republican primary in the 1st Senate District.

Jacque won with 4,368 votes to Renard’s 4,039, propelling him on to the June 12 special election against sole Democrat Caleb Frostman. In four of the six counties (Outagamie, Calumet, Door and Kewaunee) included in the 1st Senate District, Renard won. However, Jacque won Brown County by almost 500 votes, but what really put him over was the decisive win in Manitowoc County, with 1,072 votes to Renard’s 382.

“I really appreciate everybody that turned out,” an exhilarated Jacque told the Pulse the morning after the primary. “We were able to focus on a positive message and at the end of the day that carried us through. People were already familiar with the way I’ve been able to get things done in the state Assembly and that really boded well for me. I’m excited to go forward in June.”

Jacque, 37, of De Pere, has been elected three times since 2010 to represent the 2nd Assembly District. His Republican opponent, Alex Renard, a 24-year-old political newcomer, ran as a Madison outsider yet had the support of Jacque’s Assembly colleagues, including 1st District Rep. Joel Kitchens.

“At the end of the day, we were outspent probably 7 to 1,” Jacque said. “To get the results we did last night is very humbling. My thanks go to everybody else. It’s not about me. It’s about the folks that carried our message forward, and I’m just grateful.”

“I am humbled by the outpouring of support I received over the last two months by my friends and neighbors across Wisconsin’s 1st State Senate District,” Renard said in a statement released after the election results were announced. “I am proud of the campaign we ran and would like to congratulate Rep. Jacque on his victory and wish him luck in the June 12th election.”

Renard told the Pulse in a May 1 interview that he intends to file papers to run for the Senate seat again in November when voters again must choose their Senator.

Jacque maintained that he was the true outsider in the race, as evidenced by the lack of support from his colleagues. However, he expects to have full Republican support now that he has won the primary.

“I expect we will be united here going forward,” Jacque said. “Certainly there were a number of people who said they would support whoever the nominee is when we were out knocking on doors. Remember, too, there’s a lot of independents out there I think really rallied behind my campaign. That’s one of the things I’ve been really proud of, being able to work across the aisle. I’ve actually had all five of the candidates running for my Assembly seat saying they voted for me. That includes a Democrat, a Libertarian, an Independent and both Republicans.”

Now Jacque will focus on the June 12 special election.

“It’s a sprint,” he said. “We’re already less than four weeks out.”

Asked to comment on the results of the Republican primary, Democratic candidate Frostman said:  “During the past month and a half, I’ve been fortunate to talk with countless voters across the district who are ready for change. Rather than more tax breaks for the rich, I’m committed to prioritizing our local schools, roads and small businesses. I’m excited to have the chance to hear more from local residents in the next month about the positive changes we all want to see for our corner of Wisconsin. I’m grateful for the widespread support I’ve received across the district and look forward to building on that through June 12th and beyond.”