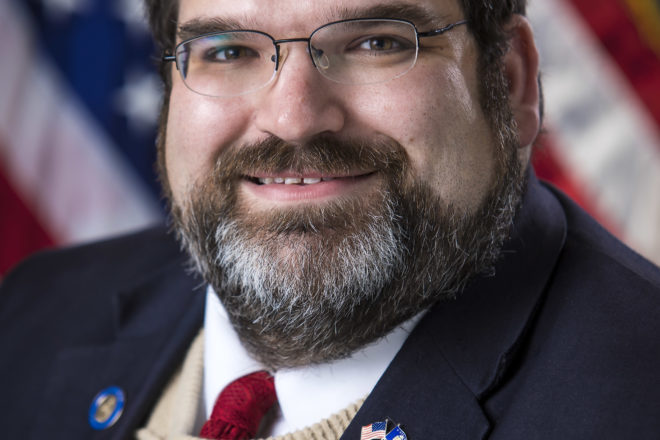 County board supervisor calls for action against Sen. Jacque

The man who represents Door County in the Wisconsin Senate – Sen. André Jacque (R-Bellevue) – was one of the 15 Republican legislators who asked former Vice President Mike Pence to postpone the Jan. 6 electoral count.

Jacque’s contribution shouldn’t go unnoticed, said Door County Board Supervisor Kara Counard during the Tuesday county board meeting. She said she would support a county resolution against Jacque’s attempt to “interfere with a free and fair election without any proof. It’s not disagreement; it’s a threat to democracy.”

She didn’t say the resolution should demand the senator’s resignation, though that’s what preceded her comment. Fish Creek resident Donald Freix spoke during the county board’s public-comment period Tuesday and sent an email that was included in the board’s packet that requested the supervisors demand Jacque’s resignation.

Counard’s suggestion was not taken up by other supervisors Tuesday, but some Madison legislators were expressing similar sentiments last week regarding the letter sent to Pence that asked him to postpone the Jan. 6 opening and counting of electoral votes for at least 10 days to allow the states to investigate and  “vote on certification or decertification of the election.”

The postponement request, according to the letter, was prompted by the “unprecedented and admitted defiance of state law and procedural irregularities” in the election and the “extensive and well-founded accusations of electoral administration mismanagement and deliberate violations of election laws” in several states, including Wisconsin.

The “proof” of those statements was a report attached to the letter that perpetuated the false narrative that the election was stolen from President Donald Trump.

That’s not how Jacque said he saw it.

The Peninsula Pulse reached out to him two weeks ago to learn why he had signed the letter. He said his concerns about the election arose during the testimony presented at the Wisconsin legislative Joint Committee on Elections hearings in December. The meeting – which was designed to be a legislative investigation into the election – devolved into partisan rancor, with Democrats walking out and testimony given by invitation only from people such as conservative talk show host Dan O’Donnell, according to PBS Wisconsin. The only Democrat to testify was a Dane County clerk.

That’s not how Jacque saw it.

“There were many revelations within the hearing that give pause,” he said.

When asked what specifically caused him concern at the hearing, he sent a link to the almost eight hours of testimony and said, “Rather than cherry-pick to summarize, I would say that when election laws are being outright broken, or at the least being unevenly enforced, it is of serious concern.”

The letter sent to Pence was dated two days before a pro-Trump mob assaulted the U.S. Capitol in an attempt to stop or overthrow the results of the election. Jacque said there was “nothing improper about the letter, and it clearly had no impact on what happened Jan. 6. Insinuations by anyone to the contrary are patently absurd.” The letter as he saw it was, instead, “written to raise a concern to a fellow public official, not be an op-ed in the newspaper.”

To support his claims that the election required investigation, Jacque said there had been improper election administration, specifically in Dane and Milwaukee counties – the two counties where a recount took place and added 74 votes to Biden’s 20,682-vote win over Trump. But the recount also raised concerns, Jacque said.

“There have been concerns expressed about the recount, particularly in Milwaukee, where officials were not allowing observation of the process in the manner required by statute,” he said.

Out of 62 election lawsuits contesting election results in several states that had been filed by the Trump team as of a couple weeks ago, 61 failed. Those decisions came from judges who were appointed by both Democrats and Republicans, including federal judges appointed by Trump. Twice the U.S. Supreme Court refused to take up Trump’s lawsuits.

When asked whether those results had any impact on his beliefs about the election, Jacque cited a Wisconsin Supreme Court decision from March in which Dane and Milwaukee county clerks gave advice that “was legally incorrect” regarding voters with an “indefinitely confined” status.

He also said the Wisconsin Supreme Court may have ruled against Trump regarding the disqualification of Wisconsin ballots, but it was a split 4-3 decision, with one dissenter indicating that “once again, four justices on this court cannot be bothered with addressing what the statutes require to assure that absentee ballots are lawfully cast.”

The accustions within the letter to Pence used as “evidence” a report from the Amistad Project titled, “Bought and Sold for Big Tech Gold: How an Unprecedented Private-Public Partnership Subverted the 2020 Election.” The report hawks a conspiracy theory involving a shadow government that undermined the election’s integrity. This came in the form of the $400 million that Facebook CEO Mark Zuckerburg donated to a nonprofit organization, the Center for Tech and Civic Life (CTCL), which in turn granted money to municipalities to help with pandemic-related election issues.

This reason, according to the Amistad Project, was simply an excuse to give money to Democratic towns, cities and counties – none of those in Door County, according to the CTCL granting report – to undermine the election.

It was “targeted grants with strings attached,” Jacque said. He considered it a form of dark money, which he acknowledged exists on both sides of the aisle during every election with the intent of influencing the outcome.

He did not answer directly whether he believed that Trump had won the election.

“It remains unknown the extent to which the violation of those laws affected the outcome of the election, and I continue to support more extensive audits of Wisconsin’s election process in order to improve public confidence,” he said.

As history knows, former Vice President Pence did not grant the letter’s request to halt the count of the electoral votes.

“Our Founders were deeply skeptical of concentrations of power and created a Republic based on separation of powers and checks and balances under the Constitution of the United States,” Pence wrote in his response to the Jan. 4 letter. “Vesting the Vice President with unilateral authority to decide presidential contests would be entirely antithetical to that design.”