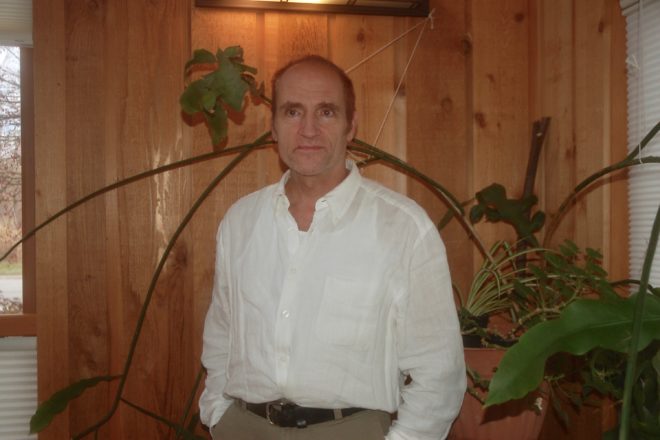 Ed DiMaio refers to writing as the “poor man’s therapist.”

It’s a form of therapy he’s been practicing since the age of 16, and one that he credits with giving him a thankful focus in life.

“I started writing in a spiral-bound notebook when I was 16 – journaling,” he said. “I came from a highly dysfunctional family with domestic violence and a whole bunch of other things. There really wasn’t a lot of money for therapy, so when I was 16, I got a job at a summer sleepaway camp. We lived in the country. Kids from the city would come up to this camp.”

Getting away from the toxic home environment was just what DiMaio thought he needed, and he looked forward to getting a new start. Instead, within a couple of weeks, “I was battling the same old demons,” he said. That’s when he hopped on a bicycle with a pen and spiral-bound notebook.

“I remember clearly in my frustration, biking to town, which was probably five or six miles, with the spiral notepad, and just hashing through with my frustration at these repetitive themes in my life, which I didn’t find helpful but continued showing up in my life.”

He quickly found that writing helped him think through his troubles.

“It helps me stay in touch with what’s going on in me on deeper levels,” he said. “It really helped me through it.”

DiMaio naturally wanted to share the power of writing with others, which he began to do in Milwaukee in 1995 when he found himself in that city for long weekends while taking a three-year program in transpersonal psychology.

“I had time on my hands, so I started doing writing groups,” he said.

First he looked in local publications to see whether there were any writing groups advertised.

Fast forward to late 2016, when DiMaio got the idea of doing a poetry writing group at the Door County Jail.

“As a teenager and young adult, I was doing things I could have gone to jail for. So, but for the grace of God go I,” he said. “I was able to come out of certain things on my own without being involved in the criminal-justice system. I really felt without that spiral notebook, I would not have succeeded as well as I have.”

For those who are now in the criminal-justice system, DiMaio thought a poetry class might bring the same benefits that he has found for himself in writing.

So he approached officials at the jail to propose a poetry group.

“Their willingness was a blessing to me, and I think it’s been a blessing in there to the people who decide to come to the group,” DiMaio said, adding that the weekly classes alternate to serve both the male and female inmate population.

“I do a rotation so that both sexes get programming,” he said.

When another slot opened for a jail class, DiMaio stepped up again to offer a class in breathing in meditation.

“I [take] the tools that served me the best in digesting my trauma and being able to kind of right a ship that was in a pretty intense storm,” he said.

DiMaio said the poetry class at the jail is the same thing he does with groups on the outside.

“I issue images for triggers for writing – prompts. It works really well. I’ve gotten a bunch of good stuff out of it,” he said.

Those who attend the sessions can be identified from other inmates because DiMaio issues a small personal poetry notebook to each participant with the expectation that they will fill the pages with writing.

“I’ve found a really high degree of humanness,” he said of the inmate writers who attend – writers who are not afraid to look at their personal demons and are ready to digest their own trauma.

“I found an amazing amount of creativity, and an amazing amount of struggle: life stories that nobody would like to hear, but that exist every day, even in this county,” DiMaio said. “There are very few people who will come to the group and beat themselves up or dwell in the negative. I coach the group as a way of finding that original part of us that was never abused, the part that’s pure. That’s kind of my goal. Maybe it sounds spiritual, whatever. I don’t link it to any spirituality. There’s a part of us, I think, that existed before abuse. Connecting with that, I think, really helps put things into perspective and really gives a person strength for making better choices.”

DiMaio said he has gotten good feedback from the inmates about the writing sessions.

“I’ve had participants in the group who have been in County for close to or more than a year, and appreciated the whole time. For them, it’s a way to keep it together, keep a focus in a very positive light,” he said.

And DiMaio said he gets more writing in for himself.

“As part of the group, we give out little journals,” he said. “I have a journal that I carry with me that I use. Twice a week I write four to 10 poems in those books, so it’s a way to chronologically maintain my own personal writing habit.”

Because of the transitory nature of the inmate writing groups – people come and go as their sentences are served – DiMaio has been thinking of creating a post-incarceration writing group.

“It’s because a lot of times people are released and they have a network of friends, and their network of friends is very supportive of the mischief that got them in there,” he said. “So a person could be in jail, and they could go through all the programming they want, but if the person who picks them up from the jail is using, the chances of them getting home without using is very slim. It takes a very strong commitment to break the cycle.”

Although he has been thinking of starting a post-jail group for a long time, DiMaio has also been hesitant to do so.

“Not having been incarcerated myself,” he said, “I feel a little awkward starting a post-incarceration group,” so he’s been remaining alert to finding the right person in the jail groups who shows signs of being, upon his or her release, the right person to help lead a writing group on the outside.

“I might have found the right person,” he said.

DiMaio has been working with Write On, Door County to possibly have some work by inmates published and to work with the visiting writers who come to the county as part of Write On’s retreat program.

“Part of the commitment for the writer at Write On is to offer some workshops in the community,” he said. “Some of the writers are very much interested in doing prison work.”

Because the Door County Jail has a feeder system that takes inmates from other counties and even, at times, other states, DiMaio emphasizes the do-it-yourself nature of writing groups.

“One of the things I really emphasize in the group [is that] when people get out, if you don’t see in your community what you need to sustain your change or focus, start it,” he said. “Maybe you’re the one needed to make it happen.”