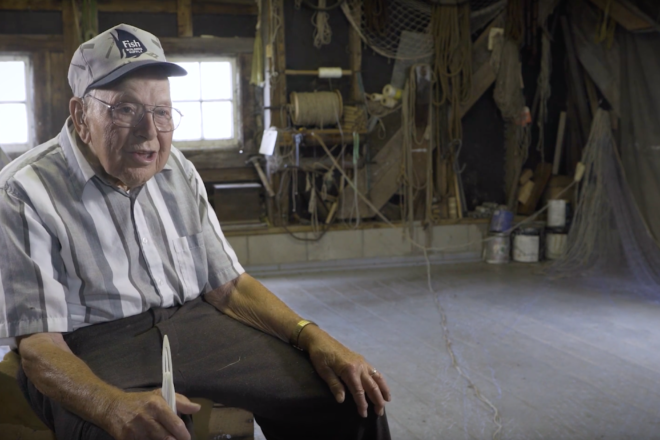 Jake Ellefson during an interview with Peninsula Filmworks in 2017.

There’s a lot that I love about living and working in Door County and right at the top of that list is hearing all of the great stories from those that have lived and worked here long before I was ever around.  Door County has some great history and it lives on through the spoken word. At Filmworks we’re on a mission to capture those stories.

A couple years ago we were headed to the Island for a day of filming and were told we shouldn’t miss an opportunity to sit down and talk with Jake Ellefson. At 90 years old Jake was still busy at work, mending nets for the Island fishermen.  As we drove up to Jake’s shed in Jackson Harbor he stepped out of the giant weathered doors to greet us. His face just as weathered as the wooden shed but framed with a brilliant smile and a twinkle in his eyes. We were here to talk about fish, something Jake knew a lot about.

There’s something special about sitting down with someone who grew up without smart phones, cable television or even broadcast radio as we know it today – they’re great storytellers.  Undoubtedly forced to share his experiences, thoughts and feelings by spoken word from an early age, Jake’s demeanor was disarming, enchanting and had us completely enthralled. Before we knew it, our time was up.  We had to catch the last ferry off the Island. As we were packing up Jake was still finding stories to tell us, at one point exclaiming “but I didn’t tell you my big fish story!”. I knew I had to get back to the Island to hear more.

That was two years ago, and while we’ve been back to the Island numerous times since then, it was on other assignments and for other reasons, we were never able to reconnect with Jake.  We heard of his passing last week and I realized that we had probably let one of the greatest big fish stories get away.