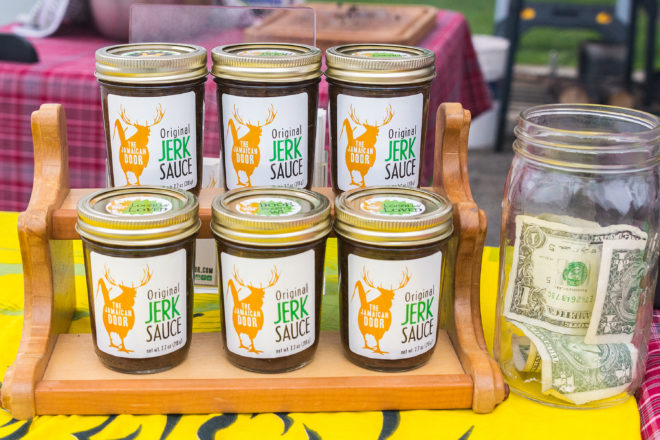 When Georgina Saunderson and four of her classmates at Excelsior Community College in Kingston, Jamaica, came to Door County to work four years ago, they expected to return home at the end of the tourist season. That proved to be just 80 percent true. Like the other girls, Georgina did return to Jamaica, but she didn’t stay long.

Living just down the street from Husby’s, the girls were intrigued by the sound of Unity the Band coming from the bar that summer night. And Carlin Hatch, a Husby’s employee, was intrigued by the sight of a beautiful girl, who turned out to be Georgina. “I finally got up the courage to casually dance by her,” he said, “and it was love at first sight.” Or perhaps, at second sight, when Georgina noticed that Carlin had accidentally tipped over his Miller’s bottle and pointed out that he needed to clean up after himself.

At any rate, when Georgina left her job at On Deck and went back to her hometown, Old Harbour, Jamaica, at the end of the summer, it was just to apply for a visa to return to Door County. “It was a miracle,” Carlin said, “that it came through so quickly.” 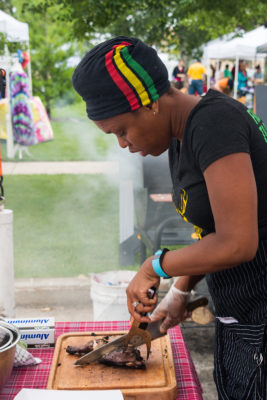 A month later, they were married at the Sturgeon Bay Courthouse, and soon after that they had a wonderful second ceremony in Old Harbour, performed by Georgina’s father, the pastor of a small United Brethren Church. The newlyweds knew they wanted their own business – something that would combine elements of Door County and Jamaica – and on their honeymoon they came up with the name Jamaican Door, still undecided whether it would be a restaurant or some other kind of food business. Georgina, who has a degree in travel, tourism and entertainment management, laughs now when she explains the inspiration for Jamaican Door. “When I first came here, I could find nothing I liked to eat! It was all Scandinavian recipes.”

On their second visit to Jamaica, Georgina’s father introduced them to the Minister of Agriculture. Jamaica’s biggest export is pimento beans, the spice called allspice in the U.S. (In Spanish, pimento refers to a pepper plant whose beans are black. The conquistadors who saw the allspice beans in Jamaica thought they were from peppers and mistakenly called them pimentoes.)

The Hatches started their business last summer. The recipe for their jerk chicken sauce came from Georgina’s family. They are the smallest export account of authentic Jamaican pimento beans that are delivered to Algoma in 200-pound burlap bags. Carlin grinds them fresh there with a repurposed Bunn coffee grinder.

“If our jerk chicken sauce was to be authentic,” Carlin explained, “the spice had to come from Jamaica.”

Prep work is done at the Fireside Restaurant in Ellison Bay. Cherry wood is used to grill their chicken because it burns slowly and smells good.

“Customers tell us they followed their noses to find us,” Georgina said. “It gives me great pride to know that when someone eats our chicken then goes to Jamaica, the jerk chicken they eat there will taste exactly the same.”

The jerk chicken sauce Carlin and Georgina make in small batches to insure freshness includes gluten-free soy, green and yellow onions, ginger, hot peppers, thyme, garlic and, of course, pimento spice. They grow the organic thyme and green onions on land inherited from Carlin’s grandmother. He is especially proud that they’re carrying on a family tradition by raising ingredients for their business on the spot that used to be his grandfather’s sweet corn field. They don’t live on that acreage now, but eventually will.

Georgina explains that the jerk chicken is a popular dish with a long history in Jamaica. It is believed the term “jerk” came from the Spanish version of a Quechua word, “charqui,” meaning meat that had been smoked and dried into strips to preserve it before refrigeration was available. This, of course, is also where the word “jerky” comes from.

Georgina says that every Sunday dinner in Jamaica includes jerk chicken, coconut-flavored rice and peas – Americans substitute red kidney beans for the peas – and escoveitch, doctor or parrot fish soaked in vinegar, lots of hot peppers and onions and sealed in a jar for weeks and weeks.

The quirky logo for Jamaican Door is a Kendeer, a chicken with antlers, representing the fact that Jamaican chicken has come to Wisconsin. It was designed by Stephanie Dohaney, a graphic artist in Sister Bay. 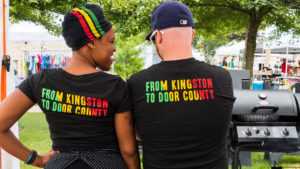 The Hatches. Photo by Len Villano.

In 2015, the Hatches began selling their jerk chicken sauce in two farmers markets. Now that they are a certified temporary restaurant with two large grills, their jerk chicken is available from 10:30 am to 1 pm on Sundays at the Baileys Harbor Farmers Market through Sept. 25. The eight-ounce jars of sauce are also available there, at the Door County Creamery and Top Shelf in Sister Bay, Main Street Market in Egg Harbor, Madison Avenue Wine Shop in Sturgeon Bay and Jenifer Street Market in Madison. You can also buy direct from the Hatches at 920.857.8419.

This is an especially good summer for selling jerk chicken, as there are many Jamaicans working in Door County, seven at Fred & Fuzzy’s alone. “It’s a taste of home for them,” Carlin said.

As Jamaican Door continues to grow, Carlin still works at Husby’s four days a week, while Georgina is home with their toddlers, Phoenix, who was diagnosed at two months with an extremely rare disability, and C.J. (Carlin, Jr.). The family’s goal for next year is to expand their business to include catering. Since they’re the only providers of Jamaican food in Door County, they expect to do well.