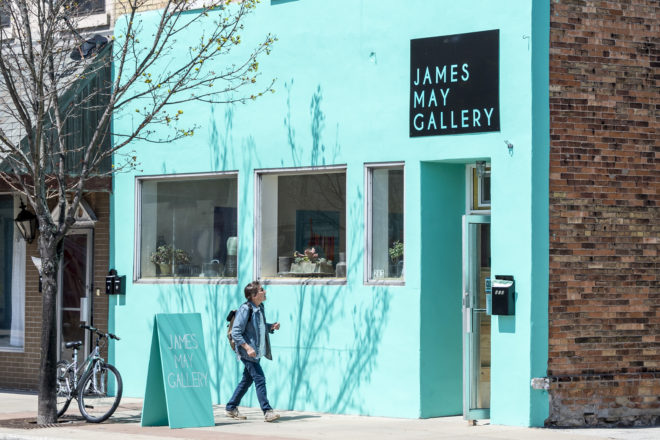 Absence and presence are peculiar concepts. Despite being opposites, both can be felt at the same time. This tricky philosophical puzzle will soon be put to the test in Algoma when James May Gallery owners Kendra Bulgrin and Jimmy Eddings will close that gallery and move to Milwaukee.

The art scene in Algoma changed when Bulgrin and Eddings, a husband-and-wife pair of artists, moved in and created James May Gallery in May of 2015. They took contemporary art to Algoma that would be perfectly in place in a larger city such as Madison or Chicago; they culled artistic, creative energy in this one area so that the arts in Algoma could blossom; and they have ever since. New galleries and businesses have moved into their Steele Street neighborhood, and the couple even opened a second iteration of their gallery – James May North – one street north earlier this year.

Even with all of this investment in – and love and respect for – their community, life winds in unexpected ways, and Bulgrin and Eddings announced in early November that they would close James May Gallery and move to Milwaukee. One of their children has a complicated health history, and the family decided it was in their best interest to be closer to Children’s Wisconsin (formerly Children’s Hospital of Wisconsin) in Milwaukee.

Bulgrin said, “Algoma has been a great community to raise our kids in, and we will really miss it. We have found that we really need to simplify our life and concentrate on our family more.”

“We are planning some changes with how we run the gallery, and this gives us a little time to enact the changes,” Bulgrin said. “We are really grateful for Kyla’s assistance and patience with us through this process.”

Bulgrin and Eddings won’t be Algoma residents anymore, but they will return for gallery openings and to reconnect occasionally with the community.

Bulgrin said, “Running a gallery in a small town has been difficult but rewarding. It has been a constant struggle to get people to come to Algoma and recognize it as an arts community. We believe we have been instrumental in creating an arts community and an arts destination and hope it will continue to grow.”

In addition to owning a gallery and being a working artist, Bulgrin was also the creator and driving force behind First Fridays in Algoma. Programming and events are held on the first Friday of every month at downtown businesses, and the focus is primarily on the arts. First Fridays will continue despite their move.

Lynn Truckey, owner of Steele Street Trading Co. and a neighbor of James May Gallery, has participated and organized programming for First Fridays. She said, “In the 17 years I have been in business in downtown Algoma, I have seen many businesses come and go. Each of those businesses has added a new element to our beautiful community. I am sad that Kendra and Jimmy will not have a daily presence in Algoma, but they have to do what is right for their family. Algoma will continue to grow, and I have been so impressed with the new energy downtown and the community as a whole. I appreciate all that Jimmy and Kendra added to the community which they are still a part of, just in a different way.”

Bulgrin and Eddings’ presence will still be felt in the continuance of James May North, these First Friday events and the overall artistic, creative spirit of the community.

Yardstick Books, an independent bookstore and gallery that opened in Algoma in November of 2018, is in Algoma partly because of James May Gallery (JMG). Its owner, Heidi Raak, explained, “Stephan [Anderson-Story, Raak’s husband] is a photographer, and his work was featured early on at JMG. We traveled to Algoma from Kansas for the week of the opening that month and fell in love with the town and the region. Three years later we moved here, purchased a building down the street from the gallery and opened Yardstick, a bookstore and art space.”

Raak continued, “We are glad that their other gallery will still have a big presence here in Algoma. James May Gallery is one of the anchors in Algoma, joining many excellent retailers who have had their doors open for years. Even as one door is closing on Steele Street, we still have a lot of great energy mounting and are expecting at least two new businesses on the block in the next few months.”

Bulgrin and Eddings’ departure means their physical absence from Algoma, but their spirit will remain very much present on Steele Street and in the continued growth of the arts in Algoma.

To find information about upcoming James May North exhibits, go to jamesmaygallery.com.