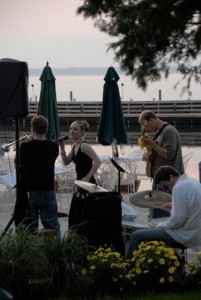 Not every act on the peninsula is fighting for a piece of the rock/ funk market. The Jana Nyberg Group has been bringing jazz to the county for the past couple summers, entertaining diners at the Mission Grille many Friday nights and saluting the sunset Wednesdays at the Top Deck Restaurant at Gordon Lodge.

Jana Nyberg handles the vocals and flute, husband Adam Meckler is on trumpet, Evan Montgomery on guitar, and this summer they’ll be joined by Derek Dreier on drums. The group has earned a strong following in Door County, and this past January they recorded their debut, self-titled CD, which they released in March.

Meckler said the band brings a “modern arrangement and a fresh sound to old jazz standards with originals in the mix.”

Their disc is available at janajazz.com, and Meckler said they’ll likely be adding new dates at new venues to their already busy schedule.