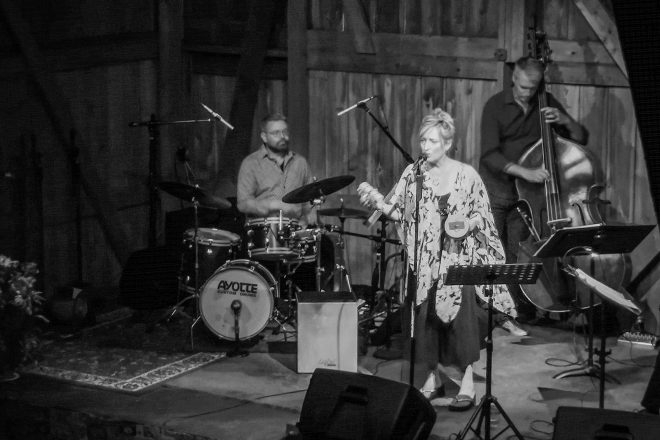 What is Janet’s planet like, you may ask? Well, it involves constellations of finger-snapping jazz numbers and orbits stars such as Nancy Sinatra and Bob Dylan. A voice smoother than the Milky Way and stronger than a supernova permeates the atmosphere. And recently, her orbit intersected with the barnyard stage at Fishstock outside Fish Creek.

“They call me Janet Planet because, musically, I can’t follow a map,” Planet said. “Come take the journey with us.”

The evening’s travels took concertgoers through a solar system radiating with soul, and throughout, Planet wove a theme of inspiring women named Nancy. She performed several songs from jazz singers Nancy Wilson and Nancy King; honored her late mother, named Nancy, by belting numbers accompanied by the full sound of long bow strokes from the double bass; and had audience accompaniment on her crowd-pleasing rendition of “These Boots Are Made for Walkin’” by Nancy Sinatra.

Like moons orbiting their planet, Planet’s band members expertly supported her voice on jazz-style guitar, string bass and drums, and as in any good jazz-inspired concert, those instrumentalists also sang out their complicated rhythms during solo moments. In addition, Planet and her band demonstrated that instruments and vocals aren’t all that different from one another: “Singers try to sound like instruments, and instrumentalists try to emulate phrasing,” she said.

Planet took her own observation literally, foretelling that one song would feature her friend “Tom Bone” as a special guest. Mr. Bone turned out to be Planet’s own voice imitating a trombone (and, technically, a trumpet) while she slid an imaginary slide back and forth with her hand. If you couldn’t see the stage, it would have been easy to mistake her vocals for actual brass instruments. Her voice turned out to be a multi-instrumentalist, later taking on a percussive quality for scat-style jazz singing. Planet also picked up hand shakers for some of the evening’s songs.

The evening’s planetary adventures also took the audience to other galaxies entirely, such as the world of traditional folk music. But even performances of Bob Dylan’s “Make You Feel My Love” and “Leopard-Skin Pillbox Hat” were performed Janet Planet style, with jazz-inspired vocals and instrumentation.

The Fishstock stage bestowed the simplicity of a country scene, bordered by two metal watering cans overflowing with wildflowers from the property. The setting suited Planet’s performance of “Lazy Afternoon” by Tony Bennett, matching the song’s imagery of an idyllic countryside. She drew particular inspiration from the song version on Nancy King and Steve Christofferson’s Dream Lands. The concert venue’s rustic vibe also complimented Planet’s performance of ’60s and ’70s classics such as “What the World Needs Now Is Love” and “What’s Going On.”

“I love the people who run [Fishstock], and it has the best acoustics,” she said. “There’s a really good soul to the place.”

Planet has earned six Wisconsin Area Music Industry (WAMI) awards and has been inducted into the WAMI Hall of Fame. Her latest interstellar musical journey has been working on Under the Venus Moon, an album soon to be released by Stellar Records, a label she co-owns with her husband.