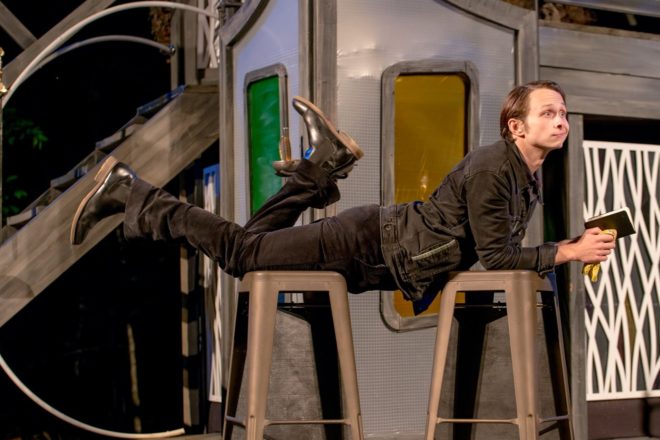 The Show Must Go On

Who hasn’t seen one of those old movies in which a Broadway star suddenly falls ill during the run of a show, and his young understudy goes on with a moment’s notice and earns rave reviews?

Folks, it can happen. And it did happen in the Björklunden garden this summer, right under our noses, with no fanfare at all.

Last winter, as Amy Ensign and Michael Stebbins, who run Door Shakespeare, were trying to decide what they could stage this summer, they considered many scenarios. If there had been a season in 2020, its centerpiece would have been Hamlet, starring the veteran Shakespearean actor Ryan Schabach, who has spent 13 seasons with Door Shakespeare and other companies around the country.

When Schabach reminded Ensign and Stebbins that he knows Guy Roberts, the founder and artistic director of the Prague Shakespeare Company, and had seen him perform in Houston in the one-actor, 105-minute version of Hamlet that Roberts had created, the decision became easy.

Schabach was already under contract, and by early spring, so was Jarrod Langwinski, a young Shakespearean actor who had been part of the Door Shakespeare company in 2019. His 2021 assignments were to serve as the company’s COVID-19 safety manager – a position required by the Actors’ Equity Association – and as Schabach’s understudy.

Playing Hamlet was Schabach’s lifelong dream, and three and a half months before the first rehearsal on June 9, he set to work memorizing the 9,000 or so lines in Roberts’ script.

Although this is a one-person show, Schabach performs all 17 characters, and the subtle ways in which he lets the audience know which character he is representing at any moment is another story. Not to mention the perfectly believable way in which he conducts a sword fight between himself and Laertes.

The show opened June 30 and, as anticipated, Schabach gave seven awe-inspiring performances. Something happened on the night of July 7, but as he said, “I was so jacked on adrenaline that I wasn’t paying any attention to my body.” The next morning, however, he took 10 steps and collapsed on the kitchen floor. He let Stebbins know that he might need a day off.

Meanwhile, Langwinski had also memorized the 9,000 lines and stage directions “just in case” and had arrived in Door County early, spending all of May doing online work to prepare for his COVID-19 safety position. By some fortuitous miracle, his one rehearsal had been on July 7, just hours before Schabach’s knee failed.

“With 10 minutes to go, sitting behind that old oak tree the stage is built around, it finally hit me: This is happening. I’m doing this show that I did once yesterday.”

Just like in the movies, the understudy did an unbelievable job in the spotlight. And has continued to do so throughout the run, as Ryan Schabach’s knee is stubbornly slow to heal. He’s earned countless accolades as a Shakespearean actor, director and producer and will, in coming decades, earn many more.

Jarrod Langwinski, this may be your first rave review, but it won’t be your last.