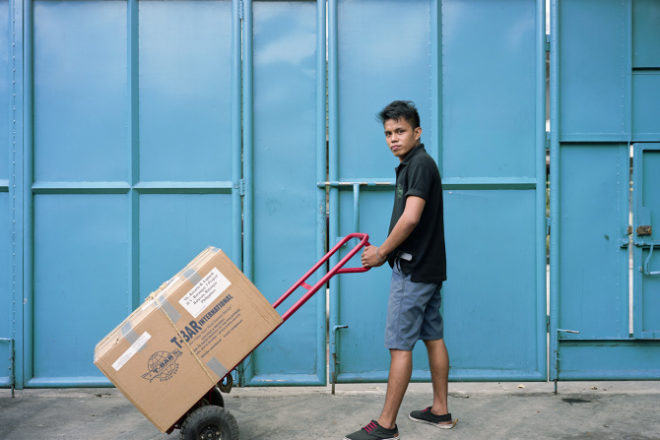 Filipinos abroad stay connected with their families back home by sending goods and gifts in large ”balikbayan” shipping boxes. “Balik” means “return,” and “bayan” means “home” in Tagalog. A worker at T-Bar International warehouse in Quezon City receives and handles a box from central Illinois in February 2015.

The Miller Art Museum (MAM) announces the opening of the exhibit Jason Reblando: New Deal Utopias. The exhibit opens Jan. 19 with a reception from 3 to 4:30 pm and a short talk given by the artist at 3:30 pm. The event is free and open to the public.

Reblando, a contemporary photographer, will exhibit two of his photo series at the MAM in his first solo museum exhibit. New Deal Utopias is an extensive photo series that documents and explores one of the most ambitious but overlooked federal programs in American history: the Greenbelt Towns, created during the Great Depression. This project aimed to meet the challenges of the Great Depression with a spirit of cooperation and the hope of transforming the American landscape.

A second series of Reblando’s photographs — the Home and Away series — will also be exhibited. It was created during the artist’s 2015 Fulbright Fellowship to the Philippines. In this series, Reblando looks at the phenomenon of Overseas Filipino Workers (OFWs): citizens who work abroad for years, and sometimes decades, to support families back home.

For more information about the exhibits or the museum, call 920.746.0707 or visit millerartmuseum.org.