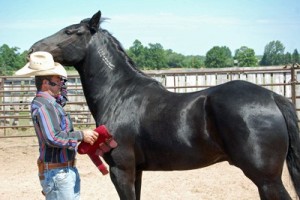 Chewy’s mustang Majestic tries to take a bite out of his hat during the July 5 session.

You can get a look at his gentle horse training techniques as Chewy and his nephews prepare for the 2014 Extreme Mustang Makeover on Aug. 22 – 23 in Shartlesville, Penn.

In the Extreme Mustang Makeover, sponsored by the Mustang Heritage Foundation, trainers are given a wild mustang and have 100 days to train them before the makeover challenge.

The Jauregis have been working with their wild horses since May 14, and already the transformation from wild mustangs to well trained horses is evident.

“He reminds me a lot of Compadre,” Chewy said of Majestic. Compadre is the mustang Chewy trained for the 2009 competition that was featured in Wild Horse Wild Ride. Compadre was sold after the competition for $9,000 to T. Boone and Madeline Pickens.

Chewy is inviting those who would like to see his horse training techniques in action to stop by the ranch to watch on July 19 and 26, starting at 10 am. The ranch is located at 8281 County A, Fish Creek. Bring your own chair.