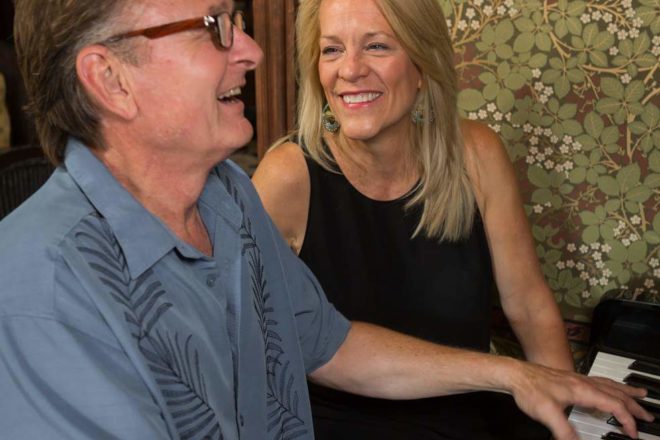 It’s tough to find a musical act that can play two nights in a row and not feel stale. This weekend, Nanci Davidson and Tom Walta will blend their years of professional musicianship with the diversity of jazz to bring a fresh show to the Fireside Restaurant in Ellison Bay for four straight nights.

“You never know what it’s going to be each night,” said Davidson, who with her partner Walta makes up the Stirred Not Shaken jazz duo. “Tom basically writes all the arrangements or makes it up as he goes.”

Davidson and Walta are both classically trained, but both have a passion for jazz and the Great American Songbook.

“He and I started messing around with trying to do this a couple of years ago and really enjoyed it,” said Davidson, adding that Walta keeps busy playing both solo and with other groups from any genre.

“We’ll do everything from traditional Sinatra to Nancy Wilson to Sarah Vaughan,” said Davidson. “It has a lot of different tempos and it’s just feel-good music.”

In deciding what to play song by song, Davidson said they feed off the crowd and the environment, catering their performance to the vibe of the venue.

“We can be the foreground or the background music,” said Davidson. “If the crowd wants to dance…we can cater to people that want to get up to dance. A lot of people will throw us requests.”

Those requests can range from the most standard of jazz favorites such as George Gershwin and arrangements of Ella Fitzgerald to modern hits from different genres including Norah Jones’ “Don’t Know Why” and selections from Led Zeppelin’s catalog.

Stirred Not Shaken will perform four nights from Aug. 31 to Sept. 3 starting at 6pm at the Fireside Restaurant in Ellison Bay.

Legacy of the Great American Songbook

The Great American Songbook likely holds the melody and chord changes to every jazz tune you have ever heard in popular culture. It serves as the canonized text of jazz musicians with songs from the 1920s to 1950s.

The original composers for many of the songs in the book are unknown, better defined by their hallmark performances by recognizable vocalists. While Ray Charles’ version of “Georgia on My Mind” may be the one you quickly recall to mind, it was actually written by Hoagy Carmichael and Stuart Gorrell in 1930. Willie Nelson’s “Blue Skies” released in 1978 was nearly 50 years after the original composition by Irving Berlin in 1926.

Any jazz musician carries a copy of the songbook with them everywhere they go, making them able to play along with any kind of jam session that might pop up.

The book is often structured very simply, with a single melody line and the list of chord changes, giving the musician the ability to improvise. By providing the basic framework for a tune, jazz musicians can modify the chord structure and embellish the melody to make a classic song sound original. Billie Holiday, famed jazz vocalist and frequent singer of songs from the book, wrote in her autobiography about never singing the same song twice.

The Great American Songbook is a way for musicians to speak the same language and keep true to individual style, all while paying homage to the classic songs that created the world of American music we know today.