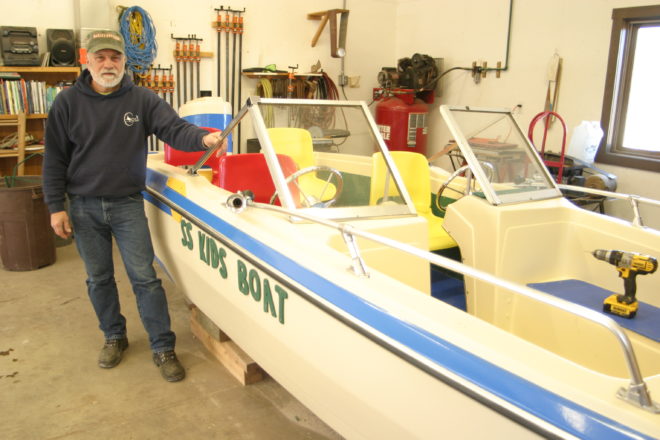 After 21 years leading the Village of Egg Harbor’s Public Works Department, Jeff Meyer has decided to go out on a high note.

“It’s a good time to leave, when you’re on top of the game,” Meyer told the Peninsula Pulse before he steps down on April 30. “I just don’t want anybody thinking I’m leaving because I don’t like it here. That is the furthest thing from the truth. I just think this is a great place to work, and I hope the young guys behind me feel the same way when they retire.”

“Jeff is someone who gets things done and is a very skilled tradesman. I like his story, too,” said village Administrator Ryan Heise. “He made a decision to work in the public sector when he could have easily had a career in the private sector. He understood the long-term benefits that the local government jobs still offer.”

But Meyer, a Door County native, will tell you he did not really understand those benefits when the job opened up for him at the age of  38. It was his father, Harvey Meyer, who enlightened his son about the importance of the Wisconsin Retirement System for government employees.

“Rocky Fairchild was the village president at the time,” Meyer said. “He found out that I was handy, and pretty soon he had me fix this and fix that. He always said it would be good to get my foot in the door if they ever did decide to hire a full-time guy. Three years later, when they did decide to hire a full-time guy, the pay was only starting at $10 an hour, so I wasn’t interested.”

At the time, Meyer had a job he loved in Sturgeon Bay.

“I was fabricating for Marine Travelift,” he said. “I really liked working there. It was a good place to work, two miles from home, making good money. Why would I come all the way to Egg Harbor for 10 bucks an hour?”

Then Meyer’s dad found out that his son was about to turn down the Egg Harbor job.

“‘What are you thinking?’ he said. ‘Benefits are going to make up for that.’ ‘Really?’ I said. I thought about that. I was young then and wasn’t thinking about retirement. But I came to my senses. Rocky was so excited I was applying that I don’t think anybody else had a chance. I always credit this job to my dad, and he died shortly after that.”

That first year, Meyer was the only employee in the newly created village Public Works Department.

“We didn’t have one tool. We had an old truck that was a hand-me-down from the wastewater-treatment plant,” he said. “They had a list of things for me to do, and that didn’t take long to breeze through. Then I started finding my own stuff to do. There’s always plenty to do.”

That first winter, Fairchild told Meyer he needed a shop to do some work.

“So he was getting designs and getting it through the board,” Meyer said. “I looked at the plans and said, ‘Rocky, is there any reason I can’t build this myself?’ He said, ‘You think you can?’ I said, ‘I know I can.’ So he said, ‘I’ll talk to the board.’”

Meyer points to a building outside his office window.

“The first year I was here, I built that building,” he said. “They let me hire a helper. It took two years to finish because there was other stuff to do. I look around the village and see the things I’ve done here. Like the big steel gates at the marina, the entrance signs to the village, the gate at the Peg Egan with the music notes. I just love building stuff like that. This job kind of turned into a management position, and I didn’t have as much time to do that stuff, and I miss it, you know. So in retirement, I want to get back to building things on my own schedule.”

Meyer said the biggest challenge for him was learning how to manage people.

“Seriously, that was the hardest part for me, and now I feel like I’m good at it,” he said. “I’m not going to be doing that anymore, and I’m going to miss that. You can get work and respect out of people without hollering and cracking the whip. In the beginning, I thought I had to be a whipcracker. Sometimes I was a little too hard on people, and that can backfire real bad. I didn’t start out as a manager. I grew into that job.”

“He was a handy guy, too, and liked to build stuff. We were a couple of fools,” Meyer said. “Josh VanLieshout [the village administrator at the time, who moved on to the same position in Sturgeon Bay] knew Larry and I had talents, and he would exploit our talents. He would always challenge me. That was kind of fun.”

“We’re kind of on maintenance mode,” he said. “We’ve got so many parks now and events. There’s a lot of things to maintain. In the summertime, we are busy just maintaining. There isn’t as much time as there used to be for projects.”

They did manage to tackle one project this winter that should make a lot of kids happy when they visit Egg Harbor Beach this summer. Meyer explained that the former Egg Harbor Marina dockmaster had donated a boat to the park that was a hit with the kids.

“The kids just loved that boat,” he said, “but over the years, the wood and upholstery rotted. Hornets were building nests inside and stinging the kids.”

Administrator Heise suggested the public works crew try to rehab the boat during the winter. The crew pulled out the old insides and refitted it with plastic seating, two steering wheels and no place for hornets to nest.

“I think a boat should have a motor on it,” Meyer said. “I was going to find one at a junkyard but couldn’t find one, so I thought, I can make anything out of wood. I’m going to make a wooden motor.”

So he did – and he enjoyed not only doing that, but also seeing the looks on his two young colleagues’ faces as the motor took shape.

“I kind of consider the boat the last hurrah,” he said. “That’s probably my last village project, and the detail on that boat is just amazing.”

As much as he enjoyed returning the boat to a usable state as an attraction at the beach, Meyer enjoyed sharing skills with the younger employees even more.

“I got to share some welding and woodworking skills with them,” he said. “They’ve got to have those skills. There are things that need fixing around here. That’s always fun, teaching young people who want to learn new stuff.”

Meyers is proud of his team and feels he is leaving the village in good hands.

But he also looks forward to catching up with his own life, especially spending more time with his wife, Kelly, who serves as clerk for the Town of Fox Point in Milwaukee County. The couple met seven years ago when Kelly was working for the Village of Egg Harbor. When she took a job in southern Wisconsin, he helped her move to Grafton, and it was the start of a beautiful friendship. They’ve been married for five years.

“We’ve always been apart,” he said. “We have an apartment in Grafton and a house on the west side in Sturgeon Bay. Now I’ll be able to spend more time with her.”

He also plans to do more bicycling and running.

“I love to ride a bike. On a bike you can go anywhere. I do the Century Ride in the fall. I’d like to do more than that,” he said. “Kelly got me into running a little bit. So I’d like to spend more time exercising. I don’t really care much for exercising, but if I’m going someplace, that’s different. I also like motorcycling. I’ve got a Harley I bought brand new in ’99, which is a classic now. I want to get on him a little more.”

And, finally, he looks forward to doing more work on his own.

“It’s a perfect opportunity for me to be an entrepreneur. I want to start a small woodworking business and do some remodeling work,” he said. “I’m not going to be happy with too much time on my hands, and I’ll be taking more work than I can handle and will be squawking. But that’s OK. It’s a good way to be.”