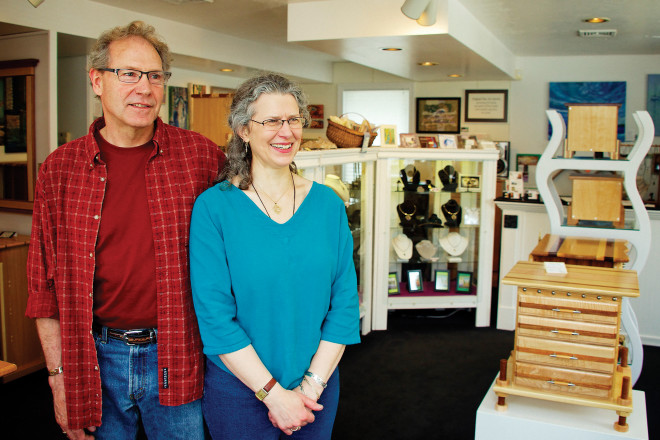 It has been declared that all the world’s a stage, and if this is so, we players must all wear costumes which portray our parts. But among these ensembles, there are some adornments that transcend the ever-changing styles of dress and tress.

Jewelry, passed down from a grandmother or donned every day, can claim a permanency past the rest of our attire – especially when it is created with as much care as Door County artist Pamela Jeffcoat puts into her pieces.

Fashioned out of precious metals and semi-precious gemstones, every one of Jeffcoat’s pendants, bracelets and rings is entirely unique. Her work as a whole is distinguished by a constant 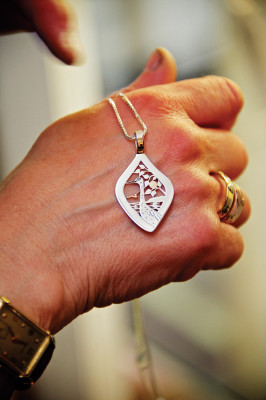 incorporation of images from nature – intricate birch trees, trillium blossoms, birds and bears enliven all her designs. Each sterling silver piece has some accent of 14-carat gold, and each gold piece another color of gold. These various shades – rose, yellow, green and white – are produced by mixing various amounts of other metals with the pure gold. Finally, Jeffcoat signs and dates all her creations. [When I arrived for our interview wearing a pair of her earrings, Jeffcoat was able to show me exactly how long ago my grandma had bought them.]

Jeffcoat currently features her jewelry at a small shop in downtown Ephraim (PKJ Designs), setting it against the backdrop of Michael Beaster’s fanciful furniture. “They complement each other quite well,” she says. His curves of wood echo her curves of silver and gold, and he employs nature themes too with his carved trees. Also, with him in the store, Jeffcoat’s customers don’t have to wander far to find a case for their purchases.

Jeffcoat’s jeweling career, of course, did not begin in this shop. After graduating high school, she briefly tried following her mother’s footsteps with a nurse’s aide position but soon realized that, though she “enjoyed the people aspect,” she had not inherited her mom’s endurance for the less appealing parts. She had, however, inherited her mom’s artistic tendencies and talents and, at the age of 19, decided to brave the art fair market. It was then that Jeffcoat taught herself how to craft jewelry, and jewelry has been her primary occupation ever since.

The method Jeffcoat has always used, even at the beginning, is a bit more intensive than bending wires and stringing beads. First, she sketches a plan, then, after gluing it to the metal, painstakingly drills and saws it out; next she solders the different pieces together at a blazing 1400° F; and, finally, she polishes the product with a buffering machine.

Although her process has remained the same over time, Jeffcoat’s style has definitely developed. “I started out simple and geometric,” she states, because it was quick to make and quick to sell, precisely what she needed for art fairs. The pieces were “very stone-oriented,” mostly solid stones like amethyst or black onyx 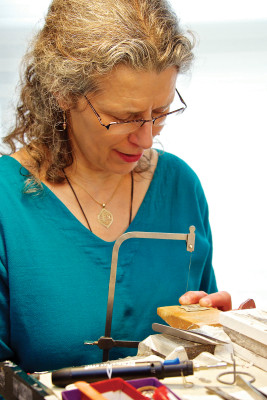 . But, she continues, “you always want to challenge yourself, and I liked nature,” so she began to focus more on her gold and silver designs and attempt some natural imagery. That was in the early 1980s, and she never went back.

What Jeffcoat means by ‘liking nature,’ is that she “appreciates it in all its form at all times.” This deep appreciation, along with her new artistic direction, compelled her to move from the art fairs of Madison to her own studio shop in Door County. “Up here you’re in the midst of it all the time,” she explains. “I get excited when I see dragonflies, and hummingbirds, and a beautiful birch tree – and it just comes out in the jewelry way.”

But just as the world’s surrounding scenery inspires Jeffcoat “in the jewelry way,” while she explores Land Trust properties or wanders the Ephraim shoreline, so do other scenes, ones that she spies in the stones themselves – not solid stones, but ocean jaspers and the boulder opals.

“A lot of time, when I look at certain stones, I see a painting,” she explains – paintings of the lake, or tall grasses, or a mess of flowers – “and then I want to add to that painting, by creating another scene that goes with it” – images of golden fish, a silver crane, or dragonflies for instance. Jeffcoat bought many of these stones long ago, but “I just wasn’t ready for them.” Now, however, she is ready, harmonizing each unusual jasper or opal with her own one-of-a-kind metal design to form a single snapshot of life in Door County.

In recent years, Jeffcoat has picked up again not just her “painting” stones, but also a paper and pen. She inherited from both her mother and her father, who was a writer. Jeffcoat says she has always possessed a fondness and flair for writing. As with her jewelry, observing a particular scene in nature – of coyote tracks or the fickle weather for example – often sparks a desire to add to it with other observations from life. Although she adds more from “life in general” than from wildlife in her essays, the end effect is similar:  “They’re little snapshots of life in my jewelry, and they’re little snapshots of life in my stories,” she says.

As snapshots of life, Jeffcoat’s pieces accomplish jewelry’s purpose. If jewelry is part of our costume, it should match the role each of us plays. First, of course, simply “the way people wear jewelry is such an individual thing,” and expresses who they are. 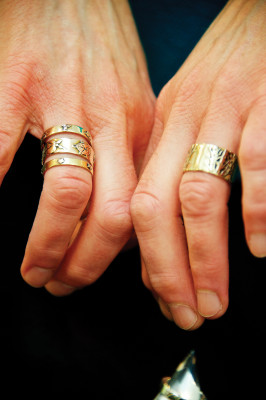 But also, Jeffcoat believes “jewelry has always symbolized something to somebody.” Many pieces of jewelry have meaning, representing some bit of us and our stories. The jeweler herself carries several symbols around her neck every day; looped together on a single chain are her father’s wedding ring, her mother’s prayer box, a St. Christopher medal, and other trinkets. All these provide snapshots of Jeffcoat’s life – her father’s love, her mother’s faith, and her own hope to keep them with her. “The sentiment of it is important,” she asserts, “you don’t even think about it in a conscious sort of way.”

With all her jewelry, Jeffcoat gives lovers of Door County, whether longtime residents or one-time visitors, lasting reminders of their experiences here. Those who buy one of her signature Memory Rings can even select particular images in order to best represent what Door County means to them.

With her commission work, however, Jeffcoat is also privileged to tell part of people’s personal stories as well as represent their life in Door County. She has made everything from a tiny Forget-Me-Not necklace for a new granddaughter to special rings for every member of a family with a pendant for the matriarch combining all their themes. “It makes me feel good when somebody’s having a special moment in their life, and they decide they want to symbolize it with something from me,” Jeffcoat admits with a smile.

So as with the nursing position, Jeffcoat enjoys the people aspect. But in the jewelry profession, she is also using her greatest gift – one for telling stories through snapshots – which is what ultimately makes this her part in life’s play.