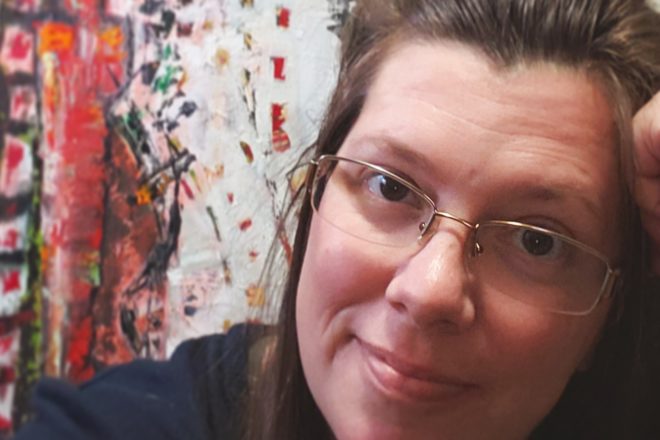 Door County has been good to Jennifer Davis, a highly regarded Baileys Harbor painter. It’s a supportive art community, but she said her grandmother Franne Dickinson also has a lot to do with it.

“She opened a lot of doors that would have been too intimidating when I was in my 20s,” Davis said.

When she was growing up, her grandmother took her to museums and galleries across the country because the family moved frequently for her father’s job in corporate retail.

“I had an immersion art-history course through her,” Davis said, naming some of her favorite painters: the abstract expressionists Helen Frankenthaler and Mark Rothko.

Davis started painting in the 2000s, and although she has little formal training, she’s taken workshops at the Peninsula School of Art with Wendell Arneson that have had lasting effects on her art.

“He inspires you, compels you to find your own voice in the work and shows you how to critique your own work without overburdening yourself,” she said. “The class made me realize I didn’t have to have a formal background and could work for my own enjoyment, and other people would enjoy it, too.”

Davis’ grandmother also hosted artist friends who shared paintings they were working on for group critiques, but Davis said that part of the process wasn’t what she was looking for.

“I would never attend because that sounded horrific to me, but other artists thrive on it,” she said. “It’s a trait that I have. One, I don’t want to ask permission; and two, I don’t want to know how you like it.”

For Davis, the artistic process is like working in secret until the piece is done, and then she’s ready to show it.

“I don’t want the feedback earlier because that can provide ammunition to my inner critic,” she said.

Her work has changed from free-form figures and nudes into playful debutantes in formal attire against abstract backgrounds. Why her work changes is a mystery to her.

Her work evolved again following a five- or six-year lull after she became sober.

“I didn’t know how to paint anymore,” Davis said. “I used to paint hungover, early in the morning. That part to me was kind of quiet, and when someone gets sober, they go through an intense period of self-flagellation, and that’s not really a time, in my experience, to paint. When I got back to it, it was like I was a totally different person.”

Now Davis describes her work as fun and joyful, and the influences come from many directions. Pop music and ’70s funk fill her studio. A few months ago, she was on a Ramones kick, and the music “absolutely” finds its way into her canvases.

“Big, large-scale, abstract works really do it for me, but I can appreciate almost any kind of art,” Davis said. “That’s what Franne taught me: to be able to sit in front of a piece and take it in. The downfall is when you are kind of a sponge. You almost have to take a break before you get in front of an easel, or your painting will look just like what you have been looking at.”

Mostly Davis works in oil, but she also enjoys mixed media. She might start with markers on paper, then add watercolor, acrylics and eventually oil, giving the painting a rich visual history. Her work has been featured at the Hardy Gallery, Mr. Helsinki, Fine Line Designs Gallery and local art festivals, but more recently, it’s been showing up in a new place: the graphic designs for the high-end hemp-based skin-care business she and her husband have started.

“We were tossing the idea around the same week that Door Karma had a fresh crop of hemp and didn’t know what to do with it,” Davis said. “That started us on a process to learn.”

After months of research, she and her husband, Christopher, launched a new business, EVO Botanicals, which they describe as a farm-to-table beauty-and-wellness company.

The hemp business suits Davis in the winter, and she’ll be back to painting in the summer when the light is bright and the gardens are full with colors. Her grandmother Franne has been busy, too: She’ll have a show at the Miller Art Museum soon.