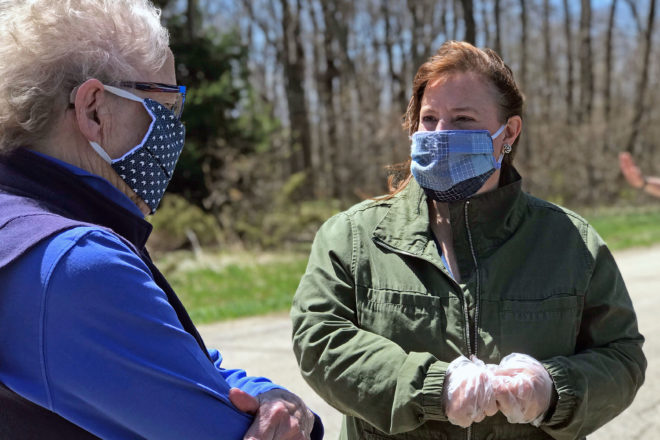 Kim Delorit Jensen, who is challenging Joel Kitchens (R-Sturgeon Bay) for the 1st District Assembly seat, talked with a supporter during a pop-up nomination signing in Sister Bay on May 15. Two hundred signatures are required. “It isn’t about the nominations too much now,” Jensen said. “It’s about getting out and talking to people.” Photo by D.A. Fitzgerald.

Described by herself and others as having tough skin and enormous shoulders, Kim Delorit Jensen is preparing to take on even more than the five restaurants she currently owns that employ roughly 100 people in Door County.

Jensen is making a run for a seat in the Wisconsin Assembly to represent District 1. Her bid for the job pits her against Joel Kitchens (R-Sturgeon Bay), who recently announced he’s seeking a fourth term for the district, which includes Door, Kewaunee and portions of Brown and Manitowoc counties.

Jensen said she’ll be a strong advocate for all voices, no matter her constituents’ party affiliations – something she said she believes is lost in today’s divisive politics.

“I just really feel the voters in our district, our voices haven’t all been heard,” she said.

The 51-year-old said she wants to change that by running for democracy.

“This partisan politics has to stop,” she said. “We need to bring Wisconsin back to the forefront of the nation. We used to be looked up to, and now people are shaking their head and wondering what happened.”

Jensen’s future may have looked very different if she hadn’t torn a muscle while attending the University of Utah on a dance scholarship – a trajectory inspired by her grandmother Gert’s Delorit School of Dance.

Jensen then discovered her second love, the restaurant business. In 2000, Jensen and her husband, Todd, moved from Minneapolis to Door County and – with her mother, Mary Jo Delorit, as her business partner – took what Jensen called a “courageous leap” by opening the Village Cafe in Egg Harbor.

She soon took on three other restaurants: Villagio’s in Juddville and Mojo Rosa’s and Pink Bakery in Egg Harbor. She will be adding a fifth restaurant – an Asian-food takeout establishment called Bangkok in Egg Harbor – this year.

Jensen says she “stays open to lose money all winter long” with her Door County businesses to create the year-round jobs that help to create community.

“That’s why I buy more restaurants,” she said. “I’ve got great people, and if I don’t employ them, they’re not employed year-round.”

She criticized the current legislative leaders for not returning to session to handle the COVID-19 pandemic.

“They need to see this as a wartime situation,” she said. “They would be able to consolidate our resources and message, and people wouldn’t be so offended about wearing a face mask.”

She also didn’t understand how Republicans could push for the Wisconsin Supreme Court to overturn the governor’s Safer at Home order without having an alternative plan in place.

“I’m a business owner,” she said. “How can you decide to turn a switch on and not have a plan in place? We’ve all been working hard to do the right things, and I think our representation hasn’t been reflecting that.”

Though guidance designed to help steer business sectors safely through the pandemic is now coming out, she said plans pertaining to reopening and liability issues have been too slow to evolve.

“What if someone gets sick?” she asked. “How are the businesses going to be protected – the restaurants, the hotels, retail? Once the virus gets into our business, is that going to stigmatize us? What does it say? Are we not being safe?”

Jensen closed all of her restaurants at the end of March and plans to reopen May 28 in a modified way by consolidating operations at Mojo Rosa’s to conserve resources, running breakfasts in the morning and rotating shifts at night.

The core values upon which Jensen is running include advocacy for small business, clean water and soil resources, and holding government accountable.

“I think people are ready for change, and they know I get things done,” she said. Learn more about Jensen at KimDeloritJensenforAssembly.com.