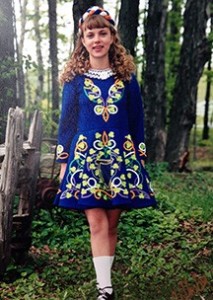 Bodies of ice, feet of fire. No matter what form an Irish dancer is performing, you can bet they are doing it with that saying in mind.

Although its origins were not well documented, Irish dancing has a rich history in Ireland’s culture and throughout the world. It was banned in the 1500s during England’s occupation of Ireland, though like many bans placed on cultures, it continued behind closed doors. It made its biggest comeback in the mid-18th century with the advent of the Dance Masters, flamboyant men who would typically travel a county, stop for six weeks in a village, and teach Irish dancing in kitchens, outbuildings and schools. According to IrishDancingInSydney.com, “having an eminent dance teacher associated with your village was cause for pride and boasting by the community.” These dance masters had a repertoire of dance steps and created new ones over time.

Most recently, Irish dance has enjoyed a revival thanks to Riverdance, the theatrical show of traditional Irish music and dance that became popular in the mid-1990s. Audiences were amazed by the dancers’ rapid leg movements and stationary upper bodies, the main characteristic of Irish dance.

There are two broad types of Irish dance: social and performance. Social dancing includes céil? (varied formations of up to 16 people that include fast and complex steps) and set dancing (four couples in square formation often danced to reels, jigs and hornpipes). Irish step dancing, of which there are several different forms, is known to include pointed toes, dancing on the balls of feet, skipping style, leaping and high kicking and is often performed with either soft leather shoes (“Ghillies”) or hard shoes made of black leather with fiberglass heels (“heavy shoes”). Soft shoe dance styles include the reel, slip jig, light jig and hop jig, while hard shoe dances include the hornpipe, treble jig, treble reel and traditional sets.

Many Irish dancing costumes pay respect to the Book of Kells, from which the Celtic designs of complex intertwining geometric designs are often taken. Female dancers often wear their hair in tight ringlets.

Locally, Irish dancing made its way to Door County in the late 1980s, when an Irish immigrant started a small school in the county, of which Sturgeon Bay resident Jessica Adams was one of the early students.

Adams was first introduced to Irish dance at the tender age of five. During her early years, Adams’ parents (Jim and Linda Adams) were involved with a nonprofit that brought children from Northern Ireland to America to escape The Troubles, a common name for the ethno-nationalist conflict in Northern Ireland that lasted from the late 1960s until the late 1990s.

It was through this nonprofit that Adams was introduced to varying elements of Irish culture, especially Irish dance. One of the families (the Green family) that stayed with them included children who were world champion Irish dancers and eventually immigrated to the United States from Belfast, Northern Ireland.

After they arrived, one of those world championship dancers, Jacqueline Green, started teaching Irish dance in the county. She gathered up a handful of young dancers, Adams included, and would practice in church basements and local pubs before Green opened the county’s first dance school in 1988.

Another of the families that came to America was the Doherty family, whose children were also world famous Irish dancers and whose son, Gavin, is a world-renowned designer of Irish dance dresses through his company, Eire Designs. Doherty designed the first dresses worn by the young dancers of Door County’s Scoil Roe Dennehy.

Adams was well versed in Irish dance when Riverdance came around in the mid-1990s and popularized the genre. That was also the point in time when she received many inquiries about sharing her interest with others.

“When Riverdance came around, there was a revival of [Irish] dance,” Adams said. “Then people would hear about it and ask if I was interested in teaching.”

Adams has taught Irish dance at Northland College in Ashland (where she earned her bachelor’s degree in Sociology and Peace, Conflict & Global Studies) as well as the Bay Area School of Dance in Ashland and Regis University in Denver, Colorado.

But she doesn’t necessarily need a formal setting to teach others – in fact, she recalls a 14-hour layover on her way to Australia with a group of people who she was going to study abroad with. As a way to pass the time, she began teaching them Irish dance moves.

“I haven’t competed or performed in a real big setting in many years but I like doing the beginner level stuff and teaching other people,” Adams said. “People are usually pretty interested in it. It’s a nice aerobic, fun activity.”

She has enjoyed performances at Milwaukee Irish Fest and even at Jacqueline Green’s brother’s wedding in Ireland, where she was able to enjoy the dance in its mother country.

Today, Irish dance makes its way into Adams’ life spontaneously, like at the Boys and Girls Club’s recent World Fair in Sturgeon Bay, for which Adams taught a group of children how to Irish dance for a short performance. She is the membership director and program coordinator for the club’s Social-Emotional & Learning Program.

No matter where she goes, Irish dance is sure to follow.

“It’s part of my heritage,” Adams said. “It’s something that I grew up with seeing these kids coming over from Northern Ireland and some of them immigrated here and getting to be a part of that, getting to travel to Ireland to dance, was great.”