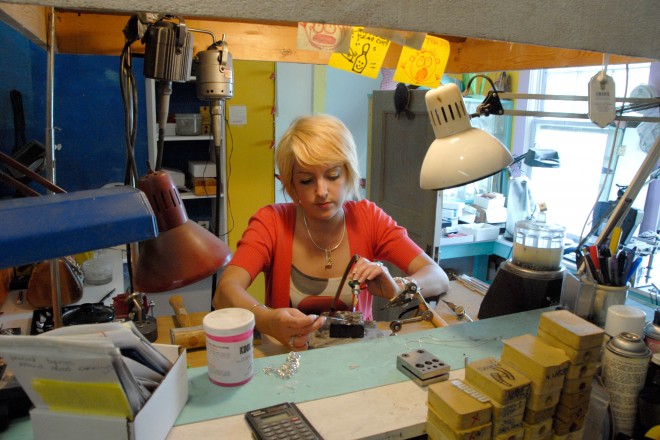 After meeting jewelry designer Jen Hough, you may have trouble believing that she has been interested in art for more than 20 years. It might be more plausible if you learn that her career began in kindergarten when she started making her own jewelry. She expanded and started selling her necklaces by age 11. While some parents might have underestimated the potential, Jen’s mom Bonny actively encouraged her daughter’s creative tendencies. She would take her daughter from their home in Sturgeon Bay to Northern Door to expose her to the variety of artwork featured in the many galleries.

“I was five or six when my mom started taking me to the ‘doll towns,’” Jen remembers. “Doll towns” was what Jen called Egg Harbor, Fish Creek, Ephraim and Sister Bay since her child’s eye saw perfect little buildings, some in pastel colors. “My mom would take me to see different galleries and that’s when I got exposed to art on such a large scale. The paintings and sculptures that I saw were so much bigger than anything we were doing at school. It’s also the first time that I had seen abstract art – not people or flowers but just pictures of shapes and colors. I just loved it,” she recalls. Along with her jewelry, Jen was also painting full pictures at age five, no doubt having her creativity fueled by her mother’s encouragement. In first grade, she started carving soap and made a sculpture of her dog, Max. At age eight, her mom gave Jen a soldering iron so she could start learning how to connect metals. “My mom kept bringing me all kinds of art supplies. I wasn’t even sure what some of it was for, but I started experimenting. She also gave me my first Dremel tool [used for sanding and cutting].”

By the time Jen entered Sevastopol High School, she was spending the majority of her time in the art department. Jen was drawn to all aspects of art and that was especially true when she attended the University of Wisconsin-Milwaukee (UWM). “I went to a lot of lectures that I wasn’t technically registered for, mainly the art history classes. I was also attending classes as a freshman that were meant for seniors, but I just couldn’t get enough.” By the time Jen reached her junior year, she started also taking weekly classes in jewelry making at Milwaukee Area Technical College.

During college breaks, Jen had worked locally at the Bead Bucket and was into beading. While in Milwaukee, she found a job at another bead store. Her attendance at the technical college originally had a more practical motivating factor; Jen thought she could make more money if she was able to repair the metal findings, another beading skill.

It wasn’t long, however, before Jen was drawn completely into the world of jewelry making. “I’m really intrigued by the intricacies of jewelry and how tiny the scale is compared to some of the large sculpture I was doing at UWM. It makes the process so much more challenging, not to mention you can wear it around. That can’t be said of a large metal sculpture.” In 2005, Jen completed coursework in gemology and jewelry fabrication from Northeast Wisconsin Technical College in Green Bay.

In early 2006, she started working at J. Jeffrey Taylor in Fish Creek. She quickly became entrenched in all facets of the business from the retail aspect to custom design work. “Jeff and Jeri have really given me my start. They have been so helpful to me in developing my jewelry. Jeff cut his workspace in half so that I could have a place to work on my designs.” The first time the customers got to see her jewelry range was at her debut opening in October of 2006. Jeri recalls, “It’s amazing how she juggles her time. I really don’t know how she did it. She was working six days a week in the store and would come in off-hours to work on her jewelry.” The incentive of needing to have enough pieces for her first show was evidently what kept her on schedule. The turnout for the opening was larger than expected and Jen sold out of her collection.

Jen’s jewelry is contemporary and uncluttered. She takes shapes and lines that she sees in every day life and applies to the metal. “I’m always looking at shapes and sketching them out. I might see a leaf, or stranger still, be driving behind a truck and see something that will inspire a pendant.” She currently does most of her jewelry in sterling silver, although will do more work in gold. Some of her preferred stones to work with are white sapphires, pearls, peridot, all colors of topaz, black diamonds, tourmaline, blue zircon, and Jen’s new favorite, the appetite stone, which “is the color of blue toothpaste. It kind of glows.”

Her design aesthetic is a reflection of Jen’s personality – eccentric, quirky, mature, varied, energetic, interesting, and limitless. “Jen’s work is a great addition to the gallery. Her style complements Jeff’s work since they are both contemporary,” Jeri says. “She has a really good feel for metal and stones, not to mention that her rapport with the customers is great.” Jeff agrees and adds, “It’s really odd. I haven’t had anyone share my workspace in over 10 years, and I swore that I would never again, but then Jen showed up. She has a whole different outlook on things since she was trained differently than I was. Jen is totally undaunted, refreshing and eager to learn. That’s something you don’t always find anymore.”

Jen will admit that her interests run the entire gamut and then some. Apart from her work in jewelry, she’s an accomplished painter, just finished a class in welding, is a self-proclaimed fashion addict with a serious collection of vintage coats (over fifty and counting), loves gardening, and is not content to just sit around on the couch watching television, obviously.

The Peninsula Art School will feature Jen’s work as part of their Jewelry and Metal Arts Invitational exhibit running August 10th through September 22nd. Her second feature reception at J. Jeffrey Taylor will take place in October, with the specific date to be announced. Jen is also considering an offer to exhibit her paintings in a local museum. In the meantime, she and her collection can be seen on a nearly daily basis at J. Jeffrey Taylor where she will happily tell you the history of gemology, her thoughts on French fashion or anything in between.

Jeri Taylor reflects, “She’s got unlimited potential in so many different areas, and I know her jewelry designs will continue to evolve. It will be interesting to see where that takes her over the next 10 years.” “Yes,” Jeff adds, “I do wonder where her career will take her. She’ll branch out since she will never be satisfied by just doing one thing. I do know that she has too much talent in jewelry to ever give it up. It will always be part of her life.” No one can know which direction Jen will take; however, it is guaranteed that it will be quite a journey to witness.