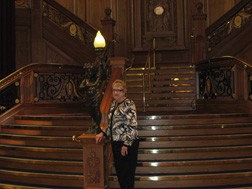 Mary Kapolnek, daughter of “Titanic” survivor Annie McGowan, stands by a replica of the grand staircase in the Belfast Titanic Experience.

The August monthly meeting of the Jacksonport Historical Society will feature a presentation from a Titanic survivor’s daughter and grandson. The presentation will include a viewing of the documentary Waking the Titanic.

As a teenager, Annie McGowan traveled to America aboard the RMS Titanic. McGowan’s Aunt Katherine was the leader of fourteen passengers from the Addergoole parish in County Mayo. Waking the Titanic will present the fragile hopes of McGowan’s community that lost more of its population that April night than any other community. McGowan’s daughter and grandson will present the documentary on Aug. 22 at 7 pm at the Jacksonport Town Hall. There will also be a brief synopsis of the family members’ trip to Lahardane, County Mayo, Ireland to commemorate the 100th year anniversary.