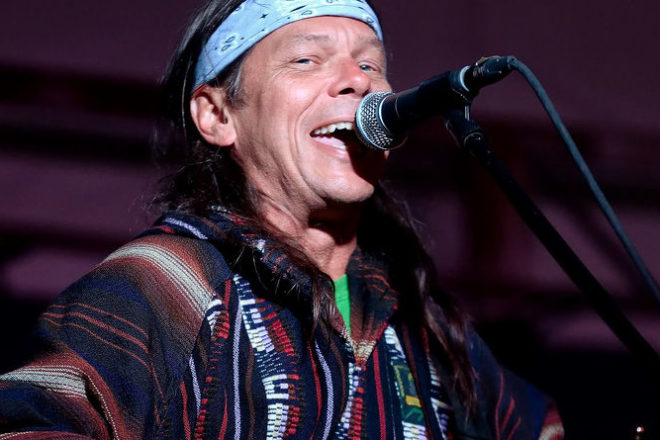 Jimmy Davis returns to Door County at the end of the month, playing both solo and with friends at Camp David on Aug. 27 and Sept. 3 and at the Red Barn on Washington Island Sept. 1. Photo by Dave Hensley.

It must be something in the air up here. Maybe it’s the water. “The tear in my eyes is proof that this place is more than just peace of mind,” sings Jimmy Davis of Door County in his song, “Morning Glory.” This country/bluegrass/rock singer-songwriter from Memphis has had much love for the Door Peninsula ever since he played his first Fishstock concert at Camp David 15 years ago. He’ll be back at it at the end of the month, playing both solo and with friends at Camp David on Aug. 27 and Sept. 3 and at the Red Barn on Washington Island Sept. 1.

“Yeah, that’s kind of been the point the whole time.”

Davis has rocked for almost 40 years and played his way through almost as many genres. He grew up playing bluegrass with Tommy Burroughs, another household name at Camp David. Burroughs joined him again when Davis and his rock band got a record deal in the late ‘80s under the name Jimmy Davis & Junction.

The hair, the guitar solos, the synths, the hair.

The MTV gig did right by them, but Davis and Burroughs knew their roots were in acoustic music. They went back at it in the ‘90s with their critically acclaimed country-bluegrass band River Bluff Clan.

After playing for years in and around Memphis while sustaining a writing career in New York, Davis moved to Texas to play regularly with Walt Wilkins and the Mystiqueros, a group of lifelong singer/songwriters who come together in weird and great ways.

The whole time he’s been doing his own solo project, coming out with his first debut album in 2004 and four more after that one, including a project of home demos done on his old Yamaha 16-track that can only burn to CD.

“We were kinda lucky in that one.”

Their big break was when a major publishing company set up an office in Nashville, allowing Davis to find work at a studio close by, getting signed for records and cutting tracks for artists like Martina McBride, Tommy Alverson, and Reba Russell.

With the rise of online radio and music rental services like Spotify, Google Music, and Pandora, Davis said the kind of career he and his friends enjoyed in the ‘80s and ‘90s doesn’t come along as often anymore.

“It’s a different world [now],” he said. “[The music industry] changes every year. The way music is delivered to the public is essentially free. Touring is the answer…what I try to do every year is take a little time to be at home and write, then be on the road. But that’s how I get to come to places like Door County.”

Davis and Burroughs have teamed up with Eric Lewis and the rest of the Fishstock tribe over the years, all making it back to Camp David for the yearly reunion.

His first show up here couldn’t have come at a better time for Davis, who had just released his first solo album, Jimmy Daddy’s Acoustic Song List.

“I started coming up to Door County when I started doing this kind of thing, this solo acoustic thing, and I got to Camp David and Fishstock and just went, ‘Woah, slow down, stop! Stay a week or two.’”

Then again, who doesn’t want to stay when they come up here? Bands who are invited up here are more than happy to come, it turns out, and make their own home here in the best way they know: by making music, sharing it and soaking in that sense of groundedness.

“We get to stop when we’re there, you know? Take hikes, go sailing. Eat it up.”