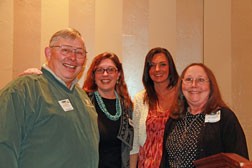 Joe Jarosh was both humbled and tickled to learn he has been named the national 2014 Certified Tourism Ambassador of the Year.

“There are so many deserving people,” he said, “but it was a nice honor to get that for what I love doing.”

And what Joe loves doing is helping people to have the best experience they can while in Door County. That’s why in May Joe and his wife, Sue, owners of Jacksonport Craft Cottage, were recognized at the Door County Visitor Bureau’s annual tourism breakfast as the Door County Certified Tourism Ambassadors of the year, and as a result, they moved on to the national competition.

“That was even a bigger surprise,” Joe said of he and Sue being named Door County CTA’s of the year.

While national contest rules only allowed an individual, not a couple, to be eligible for the national award, Joe said, “This is a team effort between Sue and I.”

Without the Jaroshes there wouldn’t be a visitor information center in Jacksonport.

The award is presented annually by the Tourism Ambassador Institute, which accredits CTA programs across the country that train tourism industry workers in enhancing the visitor experience in their areas.

“Joe is the poster child for the Door County CTA program,” says John Marks, co-chair of the award selection committee and past president and CEO of the San Francisco Convention and Visitors Bureau.

The Jaroshes have owned the Jacksonport Craft Cottage since 1984. They’ve long included time and space to provide visitors brochures and information about Door County, including Jacksonport, one of the 19 communities that make up the popular vacation destination.

They field hundreds of questions every year from visitors who want to know where to get to beaches, orchards and the county’s famed fish boils. It’s the store phone number and the Jaroshes personal number that are printed on visitor information materials.

Jarosh answers many more questions in his seasonal job in the nature center at the popular Whitefish Dunes State Park, where he has worked the past 12 seasons. One of his self-imposed tasks in his capacity at the park is to record license plates from various states. “We’re up to 41 states from Memorial Day to the 4th of July,” he said.

Even though Jarosh already provided a warm experience to visitors, he signed on to train as a CTA after some urging from his son, Jon Jarosh, CTA, who works for the Door County Visitor Bureau, which administers the CTA program. Joe and Sue Jarosh were among the first Door County CTAs in 2009.

Because the gift shop focuses on Door County mementos from 130 regional artists, opening a visitor center early on made sense, says Joe. The CTA program enhances that effort.

“It’s very exciting to be able to share Joe’s many accomplishments and his dedication to the Door County CTA program,” says Door County Visitor Bureau President and CEO Jack Moneypenny, CTA. “Having one of our impressive CTAs be named as the national CTA of the Year establishes Door County firmly as a CTA destination.”