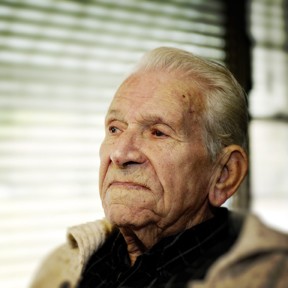 Joe LeClair of Jacksonport has worked for 80 of his 94 years. From caddying at Maxwelton Braes to supporting his family with a commercial fishing business aboard the Shelly and through rental cottages, LeClair has seen the town of Jacksonport transition over the years. Photo by Len Villano.

Not many 94 year olds have a work history of more than 80 years, but then there aren’t many gentlemen still alive with the experiences Joe LeClair of Jacksonport has had – or the excellent memory to recall all of them in detail.

Joe, the second oldest of nine children, grew up next door to his present home. “Times were hard,” he recalls, “and we all worked. We had the only two cows in town, so we always had milk and cottage cheese, and we shared with the neighbors. Jacksonport was about the size it is now, but everyone was either a farmer or a fisherman, like my dad. There were 12 commercial fishing boats, fishing shanties all up and down the lakefront and racks for drying nets. Schooners came in regularly to pick up loads of lumber.”

As a young boy, it was Joe’s job to light the kerosene lamps before services at St. Michael’s, just down the road. And, like most boys on the east side of the Door Peninsula, he caddied at Maxwelton Braes. He often walked the five miles to the golf course, but sometimes was lucky enough to get a ride. “There weren’t many cars on the road in the early 1930s,” he says, “but everybody stopped if they saw a caddy hitchhiking.”

Caddies were getting a dollar a round, and when their pay was cut to 60 cents he recalls, “We all refused to work until the dollar was reinstated. If we were really lucky, we might get a dime tip, too. And a dime was worth something in those days.”

When Joe was about 14, he and his younger brother, Louie, went to work on the boat with their dad, Englebert LeClair, a Frenchman whose family came from Quebec. That was Joe’s job until he was drafted soon after the start of World War II. He was in the military police for 18 months, first drilling rookies and later assigned to guard German prisoners working in the rice fields in Louisiana. “We didn’t have waterproof footwear,” he says, “and my feet and even my hands developed trench foot, with terrible swelling and infection.”

Joe was sent to Fort Custer in Augusta, Michigan, on his way overseas, but his captain said he was in no shape to ship out. “I couldn’t even get my boots on,” he says. “They sent me to Kellogg General Hospital in Battle Creek, where they discovered that the medicine I was being treated with, blue vitriol, was poison. They broke every bottle of it they had in the hospital.”

After six months of recovery, Joe was asked what assignment he’d like, and his answer was medic. “I had six months of training at Fort Sam Houston in Texas, and spent the rest of my time in the Army pushing pills and giving penicillin shots in France and Germany, treating both American and German wounded.”

One of the Germans Joe met during the war became a pen pal for many years. His letters were translated by the LeClairs’ neighbors, the Brungrabers. The war also afforded an opportunity for Joe to visit his mother’s birthplace in Metz, Germany.

When his five years of military service were done, he returned to Jacksonport. His dad had been ill, so Joe and Louie took over the fishing business. (If you’re keeping track, this was job number six.) They ran an old, 30-foot wooden fish tug called the R&D. Joe bought the house next door to his dad that had been the summer home of the Bauman family. He remodeled it and moved in, then built four guest cottages near the shore, years later adding two more just a little north. One of the long-time cottage guests was George Killenberg, editor of the St. Louis Globe-Democrat, whose children and grandchildren became lifelong friends of the LeClairs. 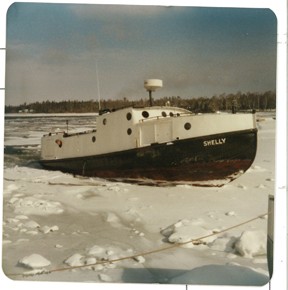 The fishing boat, Shelly, was as sturdy they day the LeClairs purchased it as the day they sold it to an American Indian tribe in Upper Michigan. Here, it is being used to break the ice on Baileys Harbor in the winter of 1978.

Englebert LeClair had supported his family by fishing for trout, but by the late 1940s, lamprey eels had killed most of the trout in Lake Michigan. Chubs, which were especially good smoked, were the new, popular fish. After a dozen post-war years fishing, with declining results, Joe saw how the smoked chub industry was growing. He built a smoker next door to his home and a new business was born. Joe’s wife, Melda, wrapped the smoked fish in newspaper and sold them door to door. As the business grew, Joe packed and distributed them himself to Rockford, Elgin and Chicago in a refrigerated truck. The LeClair children, David, Jim, Joe, JoAnne and Shelly all helped with the business, although the girls hated the fishy smell that was almost impossible to get rid of. It was a profitable family operation until, after 22 years, chubs also disappeared from the lake.

At that point, Joe returned to fishing with his brother, George. They bought a 47-foot, all-steel boat, built in 1935 by Sturgeon Bay Shipbuilding and Dry Dock, and renamed it the Shelly, after his youngest daughter. “The state had stocked the lake with trout, which were to be caught only by commercial fishermen,” he says, “but sport fishermen complained so loudly that the ruling was reversed.”

Then no commercial fishermen were allowed to take trout, so they fished for whitefish. “What were we to do if a trout turned up in our net?” Joe asks. “Lots of commercial fishermen had trout in their nets, but I was the one that got in dutch with the DNR. I was arrested and taken to court. I had to pay a fine and was sentenced to three days in jail. Baldy Bridenhagen, the sheriff, sympathized with me. He said he had to take me to jail, but he sure wasn’t going to put me in a cell. I spent three days in the recreation room.” Years later, when Joe and George decided to give up fishing, the Shelly, “still as good as the day she was launched,” was sold to an American Indian tribe in Upper Michigan that had a government treaty giving it exclusive fishing rights on local waters.

These days, his daughter, JoAnne, and her husband, Tom Moeller, manage the rental cottages, but Joe still does a lot of the caretaking. The day before being interviewed for this story, he’d winterized the buildings. (And that would be job number ten!)

In 94 years, Joe has seen many changes to life in Jacksonport. Commercial fishing is gone, but the low level of Lake Michigan this summer revealed a link to the maritime past – the remains of the wrecked ships, Perry Hannah and Cecelia, submerged for more than a century, now resting in just three to 10 feet of water.