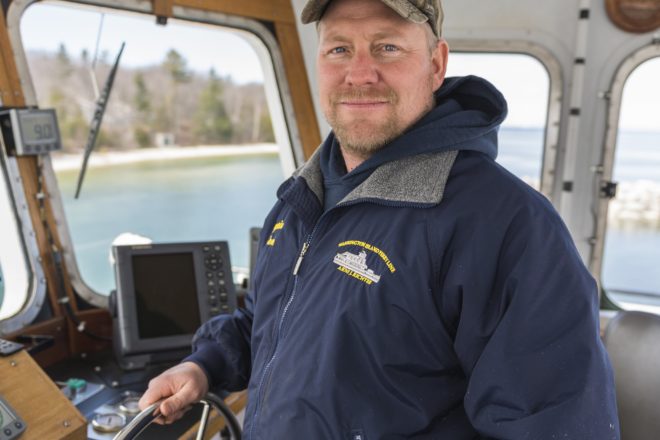 Joel Gunnlaugsson sat at his living room table explaining his frustrating love for the island he calls home. But the Washington Island native spoke softly, like talking about his own four children as he told his youngest boy not to hang on the drawers in the kitchen beneath endless stacks of folded clothes.

It’s a cold, foggy day in February but Gunnlaugsson’s schedule would make you think boats full of lavender lovers and barbeque champions were on their way across Death’s Door for a festival weekend. He swaps his ferry captain hat for the blue polo of a county supervisor, squeezing fatherhood into every moment between. There’s Gretta, 9, the twins Tug and Tilly, 5, and Zac, 3, all as busy around the island as their dad.

“If I didn’t do it, somebody else is going to have to,” said Gunnlaugsson about his county board duties. “I have thought about it. I mean, 10 years, these guys are getting to the age now where there’s little league and soccer and activities that I’m missing out on. A whole lot of life can happen in the blink of an eye.”

It would be pretty easy to brush the island off. Many retreat there for the purpose of brushing off the rest of the peninsula, finding their slice of heaven far removed from the bustle of the Door County summer.

At the county level, the 21st District that Gunnlagusson represents includes a portion of Liberty Grove from Ellison Bay north, so if a county representative were elected from the mainland, the island’s voice at the table in Sturgeon Bay would sound faint from far across the water.

“I think just having representation down there is huge,” Gunnlaugsson said. “The phrase has always been the island is pushed to the back burner of Door County.”

Gunnlaugsson, whose name stretches back to some of the first settlers on the island, makes sure the island is a part of the county conversation.

But even making it to the table can be difficult.

“The challenge is logistics,” Gunnlaugsson said. “If it wasn’t for working with the ferry line, if they didn’t give me the flexibility on my work schedule, it wouldn’t even be possible.”

The Washington Island Ferry Line gives its senior captain and 23-year veteran the ability to coordinate his work schedule with county meetings.

“Most of the time we’re able to work together,” said Hoyt Purinton, owner of the Washington Island Ferry Line. “I think neither of us knew going into it but we encouraged him to participate.”

He schedules the meetings he chairs, those of the EMS and Negotiating committees, to coincide with the days he’ll be down on county board business or as a member of the Highway Committee.

“When Joel came on the county board, it was obvious he was very intelligent and did his homework,” said John Neinas, County Board Supervisor for the 2nd District in Brussels and Forestville and chairman of the Highway Committee.  “That’s something I like to see. He’s one of those friendly guys you want to be around. He ended up being on the Highway Committee and he was very helpful up in the north end of the county.”

While most county supervisors drive less than 20 minutes to meet in Sturgeon Bay, Gunnlaugsson’s representation costs him an entire day in the summer and an overnight stay in the winter.

So why does he do it?

“That’s a good question,” he said, laughing. “I enjoy it. I guess the better thing to say is because I give a crap about the island, about the community.

“My whole life I’ve seen what it was from my ancestors and family talking and telling stories. It’s the next phase of life up here for me as I grow older with my kids and everybody else’s kids.”

It’s this desire to strengthen the community that his great-great-grandparents grew up in while balancing the need to keep the island unique that keeps him engaged. Although some on the island worry that the Northern Door development mindset will ride the ferry across Death’s Door, Gunnlaugsson doesn’t think the island can change, but rather grow.

“It’s not going to happen,” he said. “Why? Because of the ferry. The island’s never going to change to the magnitude of Sister Bay or Egg Harbor or Fish Creek.”

He explained that the ferry serves as a natural bottleneck for the number of people that can be on the island at one time. Even on clear, sunny and smooth days with an expert crew working the docks carrying a record number of visitors through the strait, that water barrier to entry will always preserve the island’s isolated charm.

“I talk to thousands of people a day on the boats and what people like is the fact that we are rural, laid back, it’s not this crazy built up thing yet,” Gunnlaugsson said. “As long as we can maintain that attitude but have limited growth on a yearly basis, we’ll be just fine up here.”

Although an advocate for the island, he still takes his role as a county supervisor to mean more than simply being a Washington Island representative. As chair of the EMS committee, he has had a voice in the plans for the new EMS center in Sturgeon Bay, a center that not many islanders will use.

In the county board room, Gunnlaugsson looks out for the good of the entire county and he hopes his fellow supervisors do the same.

“It just aggravates the snot out of me when they’re starting to worry about a focus for the island compared to the county,” he said. “I choose to live here like they choose to live there, does that mean that we should be different? We’re still Door County.”

Besides, Gunnlaugsson had plenty of island-specific action during his eight years on the town board, including four as town chair until stepping down in 2015.

“It’s like night and day,” he said. “[Committees] are a policy-making body and that’s the county board’s job too. Not to operate. When you get to the town government, it’s not the case. You’re hands on.”

He’s been urged to run for board again, as well as the school board, but stays plenty busy running the Townliner Motel, which he and his wife, Krista, bought in 2016. Still, Gunnlaugsson encourages people to call him about issues anytime.

“You have a guy who is committed to Washington Island, committed to Door County,” Purinton said. “When you see a lot of people maybe having apathy or not knowing how to get involved or frustrated by the system, he’s willing to roll up his sleeves and there is no shortage of phone calls at home. It doesn’t shut off when you leave the meeting.”

But Gunnlaugsson sees new things for his kids in the next few years, and that means for himself as well. Once the youngest county board member at 31, he’s now 40 and wishes he saw more people excited to get involved in the local government positions he has spearheaded for nearly a decade.

“It’s hard to get anybody involved in anything up here right now. The younger people are busy working, trying to make a living,” Gunnlaugsson said.

While he’ll have a hard time letting go of what he’s done representing the island, and he assures he isn’t done just yet, he trusts that someone will step up and do what he and his ancestors have done for years.

“If you feel passionate about something and know that there’s an urgency to get something done and you want to be a part of it, you’re going to make it happen. It’s that simple.”

Krista strapped boots on Zac and they headed off to the store. Gretta and the twins were in school. The little mutt at his feet pawed for just a little more attention. Gunnlaugsson looked down, thinking, before he said, “One thing I haven’t dabbled in is school politics.”