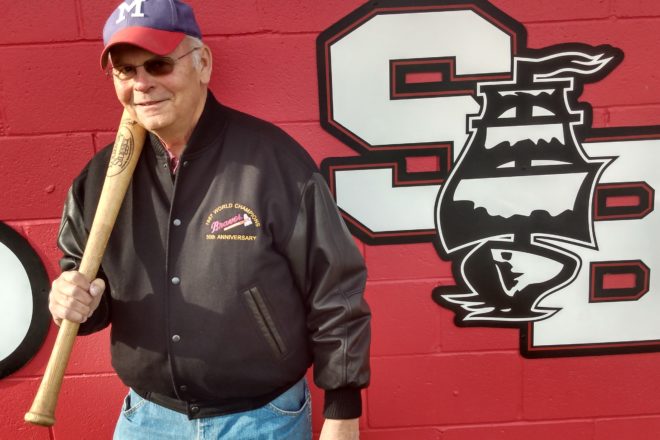 The famously talkative John Berns is no stranger to being the center of a conversation, especially if the topic is his beloved baseball.

But in a memoir about his life in the sport, the 71-year-old Door County Baseball Hall of Famer steps back and tips his ball cap deferentially to the people who, in large ways and small, shaped the person who would go on to earn that honor.

His book, 9 Innings of Memories and Heroes: A Memoir, would make an ideal stocking stuffer for the baseball fan in your life. Berns said a reader wouldn’t need to know a four-seamer from an inseam to appreciate its lessons and takeaways.

“This is really a Field of Dreams thing,” he said, “where you try to get people to reconnect and think about the people who were their biggest influencers. Maybe it’s time to give them a call, or if they’re no longer on the planet, give their children a call.”

The Berns baseball résumé begins with championships as a player in both Sturgeon Bay Little League and, in 1965, with the still-young Southern Door High School.

After graduation, more than half a century of devotion to the sport has followed: playing in the Door County Baseball League and adult fast-pitch softball, umpiring adult and youth leagues, coaching his daughter Amy’s Little League softball team and, finally, four Packerland Conference championships combined with the Sevastopol Pioneers (1994-2007) and Sturgeon Bay Clippers (2018-present). His 1995 Pioneers squad is one of just two Door County baseball teams in the last 25 years to reach the WIAA state tournament.

Consequently, enduring the last spring and summer without coaching or attending any games because of the pandemic might have been like having a body part amputated, to paraphrase “Shoeless Joe” Jackson (Ray Liotta) in Field of Dreams.

Except for 2009-17 – a period when Berns was rehabbing from hip-replacement surgery and awaiting another coaching opportunity – baseball had been a part of his daily rhythms since he was a kid. He said he feels even worse for his childhood chum and Clippers assistant, Sam Andre, who hadn’t taken a year off for nearly as long as he could remember.

“Sam looked at me one night and said it’s been 65 years since he wasn’t involved in baseball in some way,” Berns said.

Perhaps next spring will bring baseball renewal for Berns – a man who owns a program from the 1932 World Series game when Babe Ruth legendarily “called his shot.” Berns attended his first Major League game in 1957, the season when the then-Milwaukee Braves won the city’s first and only World Series title. He arrived for the interview for this article sporting a vintage Braves cap and a jacket commemorating the 50th anniversary of their ’57 triumph.

When Berns entered the local Hall of Fame in 2014, he received a congratulatory note from then-Milwaukee Brewers general manager Doug Melvin, a friend and neighbor of his brother, Tom, in Mequon, Wisconsin. The trio even attended a Bob Seger concert together once. Melvin wrote that Berns should cherish the Door County honor even more than an induction into Cooperstown, because “your accomplishments were in your own backyard and where you grew up.”

Berns co-authored his memoir with Tom Roy, a Grafton, Wisconsin, native and a former team chaplain for the Chicago White Sox who combines baseball and Christian outreach through his Unlimited Potential ministry in his home state of Indiana. Berns serendipitously met Roy, a Door County summer resident, during a lighthouse tour when Berns was emceeing as a Door County Trolley guide and driver.

“I had stuff in notebooks scattered all over my house that someday I was going to put into a coherent document,” Berns said. “My plan was to do an article for the [state coaches’ association] yearbook. When I described what I was doing to Tom, he said, ‘You have more here than an article – you have a book.’

“I kind of smiled to myself and didn’t believe him,” Berns said, “but the more we talked, the more I thought maybe he was right.”

The book is a quick read at 93 pages, liberally sprinkled with photos and an old-fashioned form of interactive involvement. Each chapter concludes with questions that prompt readers to reflect on the overall themes as they relate to their own lives.

Because baseball is a game of nines – nine innings, nine starting positions – Berns chose to limit his memoir to nine chapters (or “innings”).

Each is a tribute to a person who moved his love of the game forward, if only briefly. The choices range from the unsurprising – his still-living, 102-year-old father, Lester; youth coaches; and Braves radio announcer Earl Gillespie – to what Berns called “the ships passing in the night,” such as a one-day, substitute Little League coach; an appreciative opposing fan; and an elderly man who praised the teenage Berns for an advanced hook slide that stretched a double into a triple. Berns’ wife, Kris, is a former office assistant for that fill-in coach, the late Leon Schram.

Berns said basketball was actually his first passion growing up, but he became forever smitten with a new sports suitor – the one with its own diamond – because “it’s such a beautiful game, so many subtle things to it.” He explained the bond with a quote from postwar Major League catcher and manager Wes Westrum: “Baseball is a lot like church. Many attend, but few understand.”

“I don’t claim to understand it all,” Berns said, “but I understand more than I did at eight years old sitting in old County Stadium.”

That understanding transcends baseball, of course, as his new memoir attests in the pages about some of his non-baseball heroes.

“My heroes are storytellers, and I’m told I’m a storyteller,” Berns said. “People like Mark Twain and Walt Disney and [yarn-spinning] singers like Jim Croce and Bruce Springsteen. They try to be relevant with what they say.”

9 Innings of Memories and Heroes: A Memoir (self-published by Tall Pine Books), by John Berns with Tom Roy, is available for $19.95 through Amazon. To order a copy or learn more, email Berns at [email protected]

Off Book with John Berns

Not all of John Berns’ stories could fit into his book, but they’re nevertheless part of his oral repertoire.

• On his longtime umpiring partner Dennis Hafeman, and long ball versus small ball: When they could drop their objectivity after a game, “Dennis and I would break the games down on our drive back – ‘They should have done this; they should have done that.’ Baseball is a second-guesser’s paradise.”

If Berns had his say beyond a high school team, he would ditch the modern obsession with the long ball in favor of cleverly setting up the long ball or trying to score in a variety of ways.

“I still love what people call ‘small ball,’” Berns said. “Get a guy on and get him in, instead of three guys in a row taking big swings – to no avail – and then the guy’s still [stranded] on second.”

• On lifelong friend Sam Andre, and the time in the fall of 1993 when Berns withdrew his application for the Clippers’ head job because he heard Andre had applied: “Sam had been in waiting; he deserved that job. I respect Sam because he actually seems to prefer coaching JV [his current role], where you can get back to the basics of teaching fundamentals.”