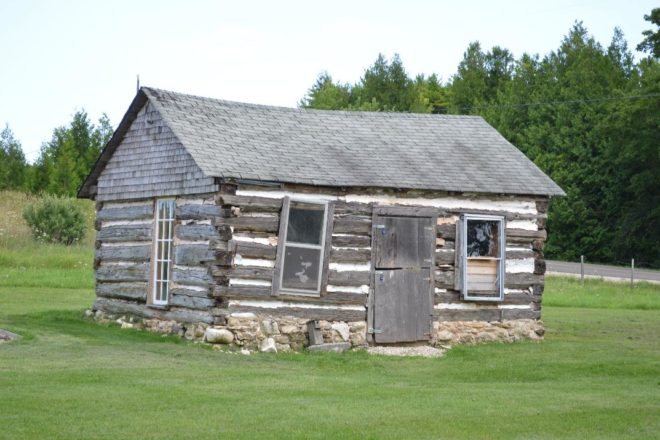 The Fons cabin as it appears today. Submitted.

The members of the Baileys Harbor Historical Society, like those of every other similar organization in Door County, have heard many presentations by people whose ancestors were early settlers. The most recent program, however, was different. Rather than speaking about his known roots, John Edwin Fons of Madison was searching for them.

He had a clue: a faded, 60-year-old photo of the 21’ x 21’ log cabin that his great-grandparents, John and Susan Fons, built somewhere in the county when they emigrated from Poland. The only other things that he knew about the cabin were that the couple had raised 11 children in that 441 square feet and that there had been a rock on which the original John Fons had scratched his name and the date: 1909.

A couple of years ago, a twist of good fortune led John Fons (the younger) to send the old photo to Leann Despotes, president of the local historical society, and ask whether the cabin might be in the vicinity of Baileys Harbor. Leann and another Baileys Harbor native, Lynn Mattkee, had an idea.

During the early 1900s, there was a neighborhood northwest of town called the Polish Settlement. Even without an address, they thought it might be a starting point. On a hunch, as they were driving home after breakfast at the White Gull Inn one day that summer, Lynn asked her husband, Ev, to drive down Highland Road. Sure enough, as they neared the intersection with High Plateau, there it was: the little log cabin with the off-center door, just like in the photo.

And there are plum trees near the house. As a child, John had heard that one of the few things his great-grandmother brought from Poland were plum pits: something small to carry that would remind her of the place and people she’d never see again. The trees are still there 110 years later.

A new picture was sent to John, and within two days, he and his beloved, Jane Meyer, were on the scene.

“I heard Jane squeal as she walked around the corner of the cabin,” John said, “and I thought she’d either seen a snake or fallen in the well.” But no: Jane had found the inscribed rock.

That discovery was the beginning of the story that John Fons told the members of the historical society, but it was far from the end of his tale.

He was born in Ludington, Michigan, to Lloyd Chanceleor and Venita June Hansen Fons, but he had no memories of that town. Because his father was an oil-field engineer whose work required frequent moves, John attended a different school every year until he was a junior in high school. He had no roots.

But during every summer of his growing-up years, the Fons family vacationed on Washington Island with John’s grandparents, John and Thelma Fons.

“It was like heaven,” John said. “Even as a child, the quality of light, the sweetness of the air created a sanctuary for me. Washington Island gave me something that was indelible. It made me a romantic idealist. A person can live without a sense of where he came from and where he belongs, but it’s so important to have a sense of home and place.”

Although the Fons men haven’t used Roman numerals to distinguish the generations, from here on, we’ll use them for clarity. The great-grandfather who built the log cabin was John I. The grandfather on Washington Island was John II. And the man seeking to find and preserve his family history is John III – a person with rich memories of his grandfather’s generation.

John II was one of the 11 children born in the log cabin in the Polish Settlement. He left home at 15 to work in a lumber camp. After his marriage to Thelma Klingenberg, he was part of the crew in a camp at St. Martin Island, and Thelma cooked three meals a day for 26 men.

Later, John II oversaw road construction on Washington Island, and during the late 1920s, he was one of the foremen on the construction of Chester Thordarson’s magnificent boathouse on Rock Island. From John II, John III heard the family stories that began to give the so-often-transplanted child a sense of rootedness.

John III has memories of his grandmother’s kitchen – the two huge pickle jars that were always full of cookies and the brightly colored dishes in the refrigerator filled with custard and sprinkled with nutmeg.

John II was a prodigiously strong man. When he asked one of the workers on a road crew to move a rock, the man refused, saying it looked too heavy. “Sit on it,” John II told him, and he proceeded to move the rock with the man on top of it.

On another occasion, Thordarson needed to get from Rock Island to Washington Island, but he did not want to get wet wading to a rowboat. Evidently Lake Michigan was especially low at that time because John II lifted his boss to his back and carried him from shore to shore.

“My father always described Dell as a very kind man,” John III said, “but life had taken turns that were not so kind to him. We went looking for him every summer in Door County on our trips to Washington Island. When we found him, my dad would get out of the car to talk with him, and before he came back, he’d reach into his pocket and give him a little money.”

Another of John’s great-uncles, Chris Klingenberg, had a three-masted schooner, the Pride, that was caught in a squall and went down just off Washington Island, its rigging tangled in the trees. No one died, but the cargo of lumber and potatoes that was lost represented a year’s livelihood for the island’s farmers. Klingerberg left the sea for a foundry job in Racine and worked for the rest of his life to pay them back.

John II was a good friend of Dave Lucky, the pilot of an early ferry across Death’s Door. When John III was eight, Dave let him steer the boat.

“Can you imagine what that felt like to a little boy?” he said.” I could believe that anything was possible – castles, knights, dragons!”

Dave’s wife, Carmen, had a magnificent alabaster statue of three elegant dancing damsels in her backyard. More interesting to John III, though, were the fishing worms she raised in her basement.

“She’d pull up the peat moss covering them,” he said, “and there were the worms – as big as snakes. We’d catch 10 fish with each one.” That led to another fishing story. When John and his grandpa would cast their lines, his grandpa would slowly count to three, and then they’d reel in their lines: two fish every time.

“They’d speak of learning the Bible and old hymns at their grandfathers’ knees,” he said, “and I’d think about sitting with my grandpa while he ate his breakfast of cold bacon grease on burnt toast, letting me have a puff of his unfiltered Pall Mall and teaching me drinking songs.”

John III teaches writing at UW-Madison. He loves to tell stories, and he reveres history. The things he treasures from his boyhood might not seem important to others – little vignettes of people he loved – but they’re the roots that give him a sense of where he came from and who he is.

Finding his great-grandparents’ log cabin took those roots a generation deeper, and through that search, he found a cousin, Michael Fons, who came from Minnesota with his wife, Roxanne, for John’s presentation: more roots growing up through the present generation.

John III urged the audience, as he urges his college students, to preserve their memories.

“You are living history,” he said. “Write it down, even if you just fold up what you write and stick it in a drawer, under the socks you never wear. Someone will find it someday, and it may change their life.

“Never give up. Remember the people you come from – good, honest, frugal, determined, dependable, stalwart people. Remember them, and write down your part of the story.”