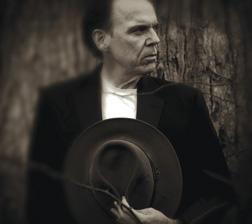 The Door Community Auditorium will come alive on Monday, July 5 at 8 pm, when legendary songwriter John Hiatt takes the stage with his all-star band The Combo. In more than three decades on the music scene, Hiatt has won a devoted following with his own brand of roots-rock. His passionate, gravelly voice is an ideal vehicle for his finely rendered songs, made famous by artists like Bonnie Raitt, Bob Dylan, and Linda Ronstadt.

Hiatt has cultivated a reputation over the years as a songwriter’s songwriter, able to blend a poet’s attention to detail with a rocker’s knack for catchy melodies and unforgettable hooks. In 2008, he received the AMA Lifetime Achievement Award for Songwriting, and earlier this year he released his 18th studio album, The Open Road.

Hiatt’s band, The Combo, features Doug Lancio on guitar, Kenneth Blevins on drums, and Patrick O’Hearn on bass. “They are the best band I’ve ever had,” Hiatt told an interviewer. “When it comes down to it, the sum is greater than the parts, and when we get together onstage, we ‘make the magic happen.’”

Tickets for the performance range from $38 to $55. To purchase tickets, call 920.868.2728, visit http://www.dcauditorium.org, or stop by the Door Community Auditorium located on Highway 42 in Fish Creek. Hiatt’s performance is sponsored by Thomas and Barbara Thurman and Dan and Diane Cross of Idea Studio.