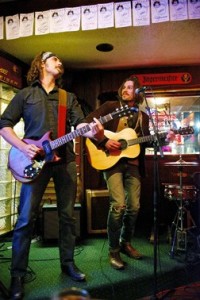 With June’s Steel Bridge Songfest fast approaching, one name to remember is that of 22-year-old Illinoisan John Hvezda (Vee-YEZ-da). Hvezda first played at the Holiday Music Motel’s Dark Songs in 2012, moved to Sturgeon Bay the following January, and now performs regularly at places such as the Fishing Hole and Waterfront Mary’s. This past winter, he recorded an EP album in Oslo, Norway, which though untitled at present, may be called American Cheese in honor of the singer-songwriter’s Wisconsin ties.

When he was younger, Hvezda spent summers with his grandparents in an old Kentucky shipping town, and his musical style is noticeably Southern as a result. Because of his grandparents, he listens mainly to musicians in the outlaw and alternative country genres, like the Highwaymen or Hank Williams. Of all his influences, Hvezda says the top three would have to be Billy Joe Shaver, Townes Van Zandt, and Bob Dylan.

He also, however, was deeply affected by the traditional Southern hymns that his mother would play on the church organ – especially because of the joyful songs’ stark contrast to the accompanying sermons about damnation. “I think there’s a lot of truth in those old hymns,” Hvezda observes, citing “I’ll Fly Away” and “Angel Band” as a couple favorites.

Yet Hvezda credits his mother with much more than teaching him hymns. “My mom’s like the idol of music,” he laughs. She taught him to play piano before he took up the guitar, encouraged him to improve his voice, and supported his earliest efforts at writing. His father, Hvezda says, is not so musical but “I started singing country, and my dad was like ‘I’m on board with that.’”

One element that these Christian hymns and country songs typically have in common are strong lyrics, and Hvezda says that is what most attracts him to any music – “lyrics that have a purpose.” He continues, “I have a hard time getting into any kind of popular music. It’s like dessert…really well produced, and it sounds really good, but it’s only surface – I like meat and potatoes,” he finishes with a grin. The songs Hvezda admires are “very straightforward, and very blunt…I really like that direct message.” In his writing, he aims at creating that same distinct direction with the lyrics. “I try to think of myself more as a storyteller than as a musician,” he says later.

Such a statement naturally makes one wonder what his stories are about. According to Hvezda, there are “of course, a healthy dose of love songs – maybe an unhealthy dose, I don’t know which.” He hesitates before answering further, “It sounds a little macabre, but…I sing about death a lot. I like all the questions that go along with it, and the imagery of it is very haunting and real. I don’t fear death; it’s like the last great unknown – and I like singing about the unknown.” He adds, “And I think with love too that’s another thing I really enjoy – there’s so much unknown to that concept.” Finally, Hvezda also sings frequently about “finding home, a place to call home.”

But Hvezda is not only looking forward to finding home; happy to be in Door County because of its many venues for solo performers, he plans to go on a few tours, do some more recording, and eventually assemble a band. “I’m excited about what’s to come,” he says – and not least of all the upcoming Steel Bridge Songfest, where, as he tells me, there are such amazing musicians and such incredible opportunities to cultivate inspiration.

For more information about Hvezda and his music, visit http://www.johnhvezda.com.

Erin Monfils is a rising senior at a tiny, Catholic liberal arts college in southern New Hampshire. Born and raised in Minnesota, but fortunately by two Wisconsin natives, she has long considered Door County a permanent home away from home. This summer, she is staying with her grandparents on the hilltop north of Sister Bay while she works as the Arts and Entertainment intern here at the Pulse.