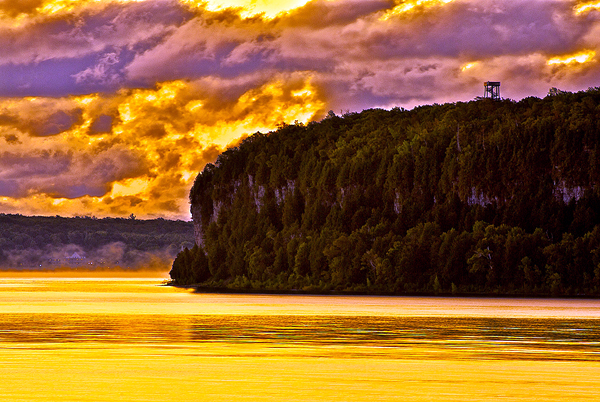 John Nolan envisioned a park system that would provide an escape from the toils of daily life. Eagle Bluff, in Peninsula State Park. Photo by Len Villano.

For an Easterner, John Nolen left a very big mark on Wisconsin. In addition to being the official landscape architect of the City of Madison, where a major thoroughfare is named for him, Nolen was asked to help the State of Wisconsin define, justify and designate a state park system.

Nolen began his landscape architect business in Cambridge, Mass., and quickly added urban planning to his services, which was a relatively new profession at the time. Nolen’s reputation grew to national prominence by the time he was hired to consult on a state park system in 1909.

“State Parks, like other parks, have definite purposes to serve and therefore should have definite requirements. Their main purpose is to refresh and strengthen and renew tired people, to fit them for the common round of daily life…” Nolen wrote in his landmark 1909 report State Parks for Wisconsin.

Those involved in the report knew there must also be solid justification for establishing a parks system. Penny-pinching naysayers are always around to question and squelch initiatives. So Nolen’s report began with a section titled “Justification of State Parks,” that began: “No question before the American people today is of greater importance than the conservation of our natural resources and the preservation of all those means of health and happiness which through selfishness or thoughtlessness are so likely to be destroyed. ‘We declare our firm conviction,’ said the Governors of the States in the recent White House Conference, ‘that this conservation of our natural resources is a subject of transcendent importance, which should engage unremittingly the attention of the Nation, the States and the People in earnest cooperation.’”

Nolen also felt it necessary to provide ammunition for why state parks are necessary. In the appendix of his report, he included letters of support from Charles Eliot, president of Harvard University; from the president of the American Civic Association For a Better and More Beautiful America; Charles Van Hise, president of the University of Wisconsin; former Wisconsin Governor W.D. Hoard, who writes that he “was but slightly prepared for the revelation of natural scenic beauty and the possibilities that lay within the proposed Door County park”; as well as social reformer/slum photographer Jacob Riis, who wrote to Nolen, “Anything that shows the government, whether state, nation or municipality, to be aroused to the needs which parks and people’s playgrounds represent in the people’s life, I hail as a long step forward…”

The report included a letter to Gov. James O. Davidson from the three-member parks board, dated Jan. 13, 1909, supporting Nolen’s report.

“The park board have attempted to sound the sentiment of the people of the state in regard to the establishment of state parks and find, among all classes of people, a strong, abiding sentiment in favor of the state establishing parks and thus preserving the great natural beauties with which this state has been endowed, from commercial vandalism or private ownership.

“We believe that the state should act while the property desired can be purchased at a reasonable figure and at a price which would prove an excellent investment from a purely money standpoint, and that if action is postponed, it will be more difficult each year to acquire these beauty spots that are already beginning to attract the attention of wealthy lovers of nature all over the world.”

Nolen warns several times in the report of encroaching urban areas and the loss of wilderness: “The population is steadily increasing; attractive open spaces are as steadily decreasing in number and increasing in value; therefore, unless action is taken in time, there is a grave danger of what may be called physical and moral suffocation.”

To meet the purpose of a state park as stated by Nolen, a proposed state park must meet these five requirements:

Thus, Nolen presented for the state’s consideration four available sites that met all those requirements.

“Finally – taking the last point in the requirements for State parks – Door County has unmistakable and not easily destroyed landscape beauty. It is wild and as yet unspoiled, with alternating interests of woodland and cliff, bay and land. Reminding one constantly of the coast of Maine, the shore with its many graceful indentations is a never-ending delight. It sweeps from point to point, here a beach of fine sand, there of gravel, then, in contrast, precipitous limestone bluffs, rising to a height of a hundred feet or more and covered with a heavy growth of native trees and shrubs, mostly evergreen. The vegetation is rich and varied. Extensive forests of pine, cedar, balsam, maple, basswood and birch, covering large tracts, with every now and then a pleasant opening in the more fertile, level land.

“Birds are numerous, as might be expected, and wild flowers abound.

“It is no exaggeration to say that the broad beauty of the scenery of this section is not surpassed in Wisconsin. Indeed, one of the undeniable claims of Door County to selection is that this type of scenery does not exist elsewhere in the State…. this Door County region under State control might easily become a famous pleasure resort of the highest order. The Michigan State Park at Mackinac Island is not one whit more attractive than the proposed Door County park might easily be. Yet the Mackinac Island Park, comprising but a thousand acres, is now valued at two million dollars and is visited annually by two hundred thousand persons. Would it not be worthwhile for Wisconsin to have a State Park with such a record and to secure such a tangible return?”