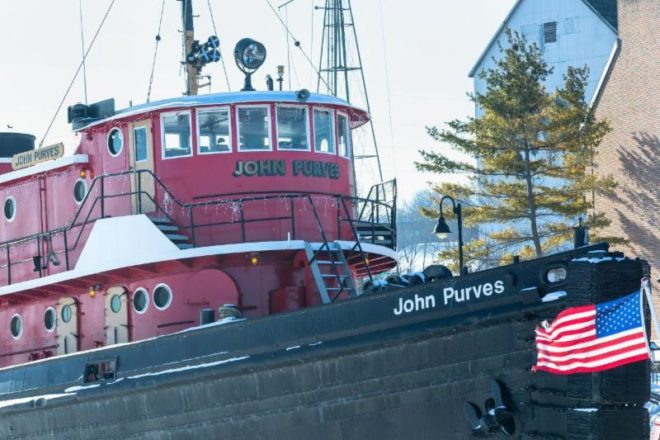 The Door County Maritime Museum in Sturgeon Bay invites the community to celebrate the 100th anniversary of the historic tug John Purves on May 1, 11 am, at the museum. Built in 1919 as the Butterfield, the John Purves has been painstakingly restored by a dedicated crew of volunteers and donors.

The event will include the U.S. Army Color Guard, Southern Door High School sophomore Brianna Partyka singing the national anthem, birthday cake and more. Speakers will include Terry Connelly, vice president of the museum board; Purves volunteer Paul Graf; Kevin Osgood, museum executive director; and other invited guests. The tugboat will be outfitted with celebratory flags and bunting, including a 48-star United States flag, representing the nation as it was when the tug was first launched.

In 1919, the tugboat Butterfield was constructed in Elizabeth, New Jersey, at a length of 149 feet and a beam of 27.7 feet. The Butterfield served the U.S. Army during World War II from 1942 to 1945 with the designation LT-145, supplying garrisons in the Aleutian Islands.

Captain John Roen of Sturgeon Bay purchased the tug in 1956 and renamed it John Purves in honor of his good friend, the longtime general manager of the Roen Steamship Company.

The museum will celebrate the historic tugboat throughout 2019, including a limited number of smaller Nuts & Bolts tours, which allow guests to learn in greater detail about life aboard the tug and to see some areas not seen on standard tours. Tickets can be purchased at doorcountytickets.com.

﻿The Purves will receive recognition during Maritime Week in August; one session of the Maritime Speaker Series in the fall will be a panel discussion about the tug’s history; and the museum will celebrate the service of LT-145 with a special Veterans’ Day rechristening event in November.

For more information about the John Purves and the year of celebrations, visit DCMM.org.