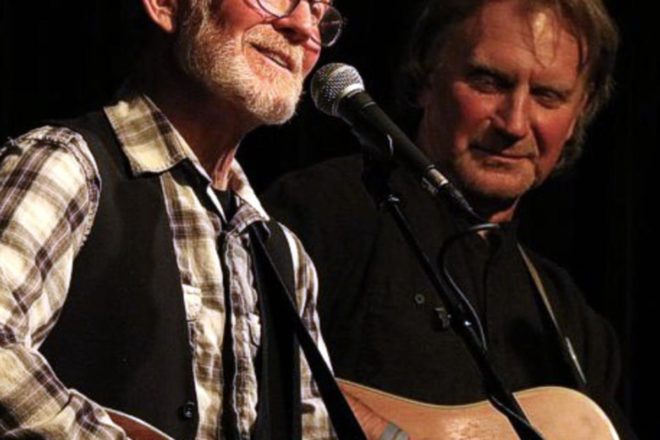 Johnsmith and Dan Sebranek will perform at the White Gull Inn.

Wisconsin singer-songwriters Johnsmith and Dan Sebranek will be featured in concert at the White Gull Inn in Fish Creek on Jan. 16.

For more than 30 years, Johnsmith has been sharing his music across America and abroad. He has become a favorite at festivals, clubs and house concerts. In addition to being a Kerrville New Folk winner, he has released eight solo albums, leads musical tours to Ireland, teaches songwriting and has worked in Nashville as a staff songwriter.

Sebranek is a renowned singer, songwriter and musician who started his musical career at the age of 14 with musical roots in bluegrass and rock ’n’ roll. He has shared the stage with Johnsmith, Michael Martin Murphey, Hans Mayer, Bill Miller, John Prine, Perry Jordan and Pure Prairie League. Sebranek performs each year in Ireland and regularly tours his home state of Wisconsin. He has five successful recordings, including previous works with Johnsmith.

An optional fixed-price dinner will be served at 6 pm. On the menu are chicken and dumplings served with roasted red peppers, wilted kale and spinach in a saffron broth; Cobb salad topped with hard-boiled eggs, tomatoes, avocado and red-wine vinaigrette; and flourless chocolate cake.

Tickets for the 8 pm concert are $22 per person. If still available, concert tickets can be purchased at the door, although many concerts sell out. Reservations for the pre-concert dinners are recommended. To purchase tickets and learn more, call 920.868.3517 or visit whitegullinn.com.