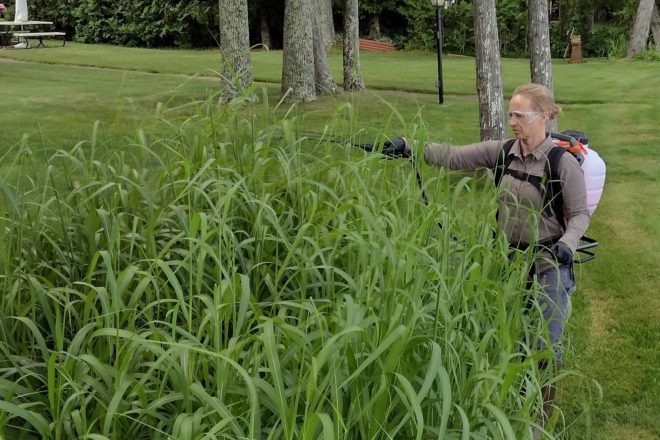 Rebecca Brown sprays a herbicide, Rodeo, to try to kill a patch of Johnsongrass.

County officials aren’t sure how a clump of invasive tall grasses wound up near Clark Lake, but they certainly want to kill it.

Weisse said he was present when DCIST coordinator Samantha Koyen made a site visit, noticed a grass she didn’t recognize and then used an image-matching site online to narrow down the possible species. The Wisconsin Department of Natural Resources (DNR) then confirmed that it was Johnsongrass: a prohibited species in Wisconsin that can chemically harm livestock.

Johnsongrass is a highly invasive, fast-growing perennial grass that can grow to seven feet or more. When stressed, the plant can produce a toxic, cyanide-containing substance that can poison cattle and other livestock, according to the DNR’s website. Additionally, high nitrate levels can occur in the plant and result in nitrate poisoning in sheep and cattle.

“It’s a dangerous plant,” Koyen said. “There are counties in Wisconsin that have had populations of this plant reported, but this is the first in Door County.”

The plant is highly aggressive, spreading by root and by seed, and can outcompete crops and reduce crop yields. Governments of 53 countries consider it invasive. Koyen found DNR materials that listed it among the “10 worst invasive weeds in the world.”

She said she’s not sure how it arrived in the county. It could have come with contaminated birdseed, or as a seed or weed in a potted plant or grass. It could also have been intermixed with hay or forage food for livestock.

Johnsongrass got its start in North America during the 1840s, when Col. William Johnson introduced the species to his farm in Alabama as a forage alternative from the Mediterranean, Koyen told Clark Lake landowners. Today, Johnsongrass has taken root in every state except Minnesota, Alaska and Maine.

Possession, transportation, transfer or introduction of Johnsongrass is prohibited in Wisconsin, and any small “pioneer populations” of the invasive grass must be eliminated, Koyen said.

She said that fortunately, the approximately 10-foot-by-seven-foot patch of the grass was not extremely close to the shoreline, and the county will continue to monitor the location during the next few years and respond if it pops up again in the same location or nearby. Koyen said DCIST used a herbicide, Rodeo, to kill it and hopes it won’t make a comeback.

“Because there aren’t a lot of populations in Wisconsin, we’re going over what the best method is,” Koyen said. “It’s a big problem in Texas. Our climate is not the same.”

Koyen said the grass has a large, sprawling seed head shaped somewhat like Kentucky bluegrass when it goes to seed. Johnsongrass also resembles corn in some ways, having a narrower but long leaf with a firm, white stem down the middle, plus fine, hairlike strands near the stalk.

Koyen provided a letter to Clark Lake property owners so they could identify and stay on the lookout for Johnsongrass.