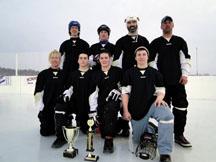 After a topsy-turvey day on the ice, the Hilander Cup went to Johnsons’s Park in the Feb. 20 season-ending tournament for the Northern Door Broomball League.

The tournament was turned upside down in the semi-finals. That’s when the Sister Bay Bowl, the regular season champions and number one seed, fell to Husby’s, while the number two seed Peninsula Pulse got throttled by Johnson’s Park, setting up a Husby’s vs. Johnson’s Park finale. Johnson’s Park waltzed to victory in the championship game.