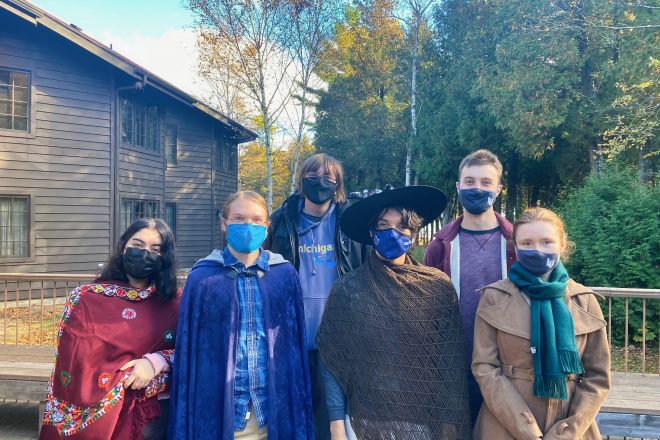 October came and went so quickly that I wasn’t prepared for the fast-approaching train that was November – bringing with it National Novel Writing Month (NaNoWriMo). This event began in 1999 as a challenge to write 50,000 words of a novel in 30 days. Now, each Nov. 1, people around the world begin to write their way toward their own new novel.

At the start of every year, I add “Participate in NaNoWriMo” to my goals for the new year, inevitably scratching it off because half the month flies by without me noticing. After four attempts, I still have yet to write more than 6,000 words. But for those who are dedicated and want to start developing dedicated writing habits, I highly recommend participating.

I reached out to the Creative Writing Club (CWC) at Lawrence University – my alma mater – to get some ideas for what to write about this year. The club was kicking off its NaNoWriMo participation the weekend of Oct. 29-31 at Björklunden in Baileys Harbor, so I stopped by to chat with some of the members about their plans for the writing challenge and what they were most excited and nervous about.

“If you want to try to write an entire novel in one month, go for it,” said Jeff Mason, club co-president. “Otherwise, don’t try that. Just try to write more. In the spirit of NaNoWriMo, it’s more important to just get words on the page instead of trying to finish an entire project.”

“This is one of my first times ever really interacting with other writers all at once,” said Alexander Poplawski, a freshman music-composition major. He and his brother wrote a lot, but his family didn’t want to read his uncompleted work – no spoilers!

“So this is kinda new,” he said, “to really share it [my writing] with other people.”

With the CWC conversation in mind, I made a list of recommendations for those who wish to embark on their own NaNoWriMo journey.

Use the website. The official NaNoWriMo website (nanowrimo.org) is a great resource for first-timers – and really, it’s great for all participants. After creating a profile, you can add friends, track your writing progress and interact with other participants. The site also offers resources for writers, including prep and pep sections.

Invite your friends. This is probably one of the most important pieces of the puzzle. I know from my own experience and talking with the CWC members that having other people to write with and bounce ideas off of is very helpful. Talking through what you’re trying to accomplish helps to illuminate the holes and can create a stronger story. For those who are trying to develop better writing habits, it’s also good to have someone to hold you accountable.

Create a habit. I was excited to hear that although most of the CWC members wanted to accomplish the writing challenge to some degree, most were just getting back into writing seriously and were hoping the experience would help them develop better writing habits – which is what can make your NaNoWriMo experience more successful in the long term. Start finding ways to schedule writing into your daily routine, whether it’s for three hours or just 30 minutes. I also like the reward system: Write for your desired time, then after that, you get something special.

Have fun! If you aren’t having fun, you aren’t doing NaNoWriMo right. The month is a celebration of creative writing in all its forms, so set some goals, but don’t stress. This isn’t a contest; there are no winners or losers. This month, get closer to your characters, finesse your plot or work on that poetry collection. Celebrate your creativity!

To the Lawrence CWC:

Carla, I hope you’re able to use your poetry for healing. Even if it’s meant for your eyes only, it’s important to understand what we’re feeling and experiencing.

Alexander, spend some time with that one character this month, and work with your fellow CWC members. It’ll come to you.

David, good luck on developing your writing habits. Find a buddy who will help keep you accountable.

Esteban, don’t look at your poetry too harshly. You have a stronger voice than you think.

Jeff, continue to set those lofty goals, but don’t let them be markers of your writing success. Finished or not, you are still writing.

And Spencer, write the story that compels you, and don’t worry about where it fits into the larger realm of literature. You’re already off to a great start!