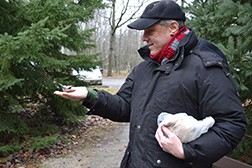 It was the day after Christmas when I pulled into the parking lot of the White Cedar Nature Center in Peninsula State Park. In the car with me were my two younger sisters and my 15-year-old niece, and today we were on a mission: to join the park’s Chickadee Club.

We knew few details on how that was going to happen, just that it involved a handful of birdseed and chickadees. But was it really that simple? The answer, as we came to find out, is yes.

The Chickadee Club has been a quiet phenomenon at Peninsula State Park since naturalist Kathleen Harris came on board full-time in the late 1990s.

“We’ve been feeding the chickadees from the hand since my first fall. It was kind of quiet, people just knew to come and this year I decided just for the fun of it to make Chickadee Club Cards,” Kathleen said.

Getting the chickadees to come wasn’t challenging for the naturalist, something she attributes to the good cover of spruce trees next to the nature center. While the chickadees are more skittish in the fall, that wariness dies off by the start of winter and the chickadees stick around until March.

Black oil sunflower seed is the food of choice for the Black-Capped Chickadees. That was evident as my sisters, niece and I made our way up the walk to learn how to feed the birds. Standing alongside the walkway was a family from Milwaukee, each of them with a handful of sunflower seeds and a number of chickadees fluttering from one outstretched hand to another.

The Abrams family (father Craig, and his two children, Sara, 13, and Ross, 11) has been feeding the chickadees at Peninsula State Park for several years. It has been a family tradition for Craig, his wife and parents to visit Door County after Christmas since before Sara and Ross were born. But it wasn’t until a few years ago that they brought the kids to the park, where they were introduced to Kathleen at the nature center and encouraged to feed the chickadees. 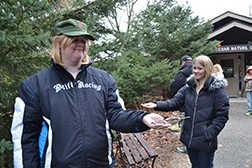 Autumn Newling, left, stands quietly while a chickadee feeds from her hand while Molly Skiba looks on.

Soon enough it became a family tradition and the Abrams now make sure to pack sunflower seeds for their annual trip. They have fed the chickadees in mild temperatures and in blowing snow, but there is always one constant: the birds.

“At first it’s almost startling, you’re not used to an animal coming and touching you,” Craig said. “But then it’s very exciting.”

“Nature doesn’t get any closer or any more real than that,” Kathleen said of feeding the birds. “To actually have these birds land on your hand. Chickadees themselves are such happy little birds.”

Encouraged by the Abrams, my sisters and niece made their way to the bucket full of birdseed, scooped up a handful, and stood between the spruces. Despite the group of people congregated along the trees, it was quiet enough to hear the hum of chickadees in flight, their beating wings sounding like nature’s helicopters just inches above your head.

It was only a few moments before I heard my sister, in a mix of startle and excitement, exclaim, “Aw!” And when I turned, there she was, smiling down at a Black-Capped Chickadee, its tiny gray feet wrapped snuggly around her finger. It snapped up a seed and off it went into the tree. Within minutes, all three of them had quietly exclaimed at the awe and wonder of the birds landing on their hands.

Silence took over as the birds came and went, alternating between the many motionless hands offering up their favorite treats. I quickly learned how to capture photos of the bird feeding (after a few shots of hands with nothing but birdseed, the chickadees a blur in the corner of the frame or absent altogether). 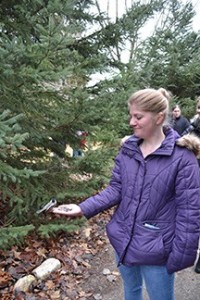 Abby Skiba stands still while a Black-Capped Chickadee feeds from her hand.

Then it was my turn. I put the camera away, grabbed a handful of seed, stood between the trees, and waited. And while I was looking up into the tree admiring the little birdies perched on the branches, I felt a light pressure on my hand. The sensation made me want to pull my hand back, but of course I’m glad I didn’t. A chickadee had landed and over the next few minutes, several more did as well.

After the satisfaction of feeding the birds, I tossed my handful of seed onto the ground and went into the nature center to talk with Kathleen about the Chickadee Club.

On my way out the door, she exclaimed, “Oh! Don’t forget your Chickadee Club Card!” and handed me a small, yellow card announcing my membership.

“No dues. No meetings. No perks,” she said with a laugh. And I walked away toward my sisters and niece in the parking lot, smiling about our newfound membership into nature’s club.