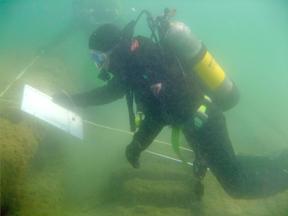 The Wisconsin Underwater Archaeological Association (WUAA) was back in Baileys Harbor recently surveying the many wrecks that lay between the old lighthouse and the Baileys Harbor Yacht Club. This year’s project started May 30th and concluded on June 1st, although the group plans to come back sometime this summer.

Russel Leitz and Hank Whipple have coordinated the projects since 1998 with additional projects in 2003 and 2007. Russ has been researching shipwrecks in Baileys Harbor and has documented 15 wrecks from 1851 until 1929. They include 11 schooners, 2 scow schooners, 1 brig and 1 gas powered vessel. The many sections that lay scattered from the lagoon behind the lighthouse, in front of the lighthouse, and trail that leads past the Baileys Harbor Yacht Club are from numerous shipwrecks.

WUAA member Steve Wagner and Russ side scanned the area in late April but the weather did not cooperate and limited work could be done. Side Scan sonar is a sophisticated bottom profiler that identifies objects on the seabed. In recent years the technology has become affordable and is now used for fishing and even used in finding drowning victims. 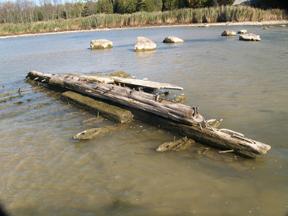 This keel laying in shallow water from an old schooner was reported to WUAA by summer resident Jeff Stanley; it will be a future project for WUAA. Photo from Jeff Stanley.

Russ Leitz said that less than 50 percent of what has been found has been surveyed and that WUAA could be working in Baileys Harbor for three or four years before finishing. This year more work on the sites is anticipated but no specific dates are set. Goals for this year are to complete the work done in early June and to gather information to create an overall layout of the sites. The long-term goal is to document all of the sites for a publication that would be of interest to history lovers as well as scuba divers, snorkelers, and kayakers. 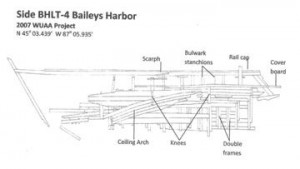 Site Plan drawn as part of the 2007 project. Photo courtesy of WUAA.