Part I of the Cora A. left off with the schooner when she was caught in a squall off Manitowoc in mid-November 1908 and broke her main boom. The Cora A. was named after the wife of P. L. Anten, one of the first owners of the vessel. Cora Wilson was born in Edinburgh, Scotland on August 16, 1846, and married Mr. Anten in 1870.

The schooner Quickstep was reported to be going into the ocean trade with the Cora A. but never did. Photo from the C. Patrick Labadie Collection. (CA5)

William Walsh, in April of 1910, sold the Cora A. after 21 years to H. Estabrook, President of the Estrabrook Skeele Lumber Co. of Chicago, along with James Erickson and Theodore J. Kjeldaas of Milwaukee – all owning one-third interest. James Erickson would captain her that year, and she cleared Chicago for lumber by mid-May.

The following year in May, H. L. Crumpacker, a lawyer from Michigan City, Indiana acting as agent for the Chicago Transportation Co. of South Dakota, would purchase the one-third interest held by the Estrabrook Skeele Lumber Co. She would be completely rebuilt including a new mainmast before going out. 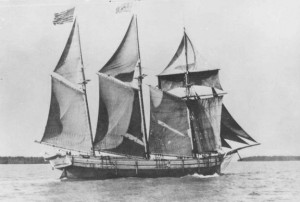 The Cora A. under full sail. Unlike the traditional schooner rig, the Cora carried a square and rectangular sail on her foremast (forward) mast. Photo courtesy of the Thunder Bay Sanctuary Research Collection. (CA6)

In 1913 the Cora A. was noted in newspapers again for her speed by completing a run from Chicago to Marinette in 24 hours via Death’s Door. Captain Swanson covered the distance of 275 miles at an average speed of 11.5 miles per hour. She would receive a new mizzenmast in Chicago in July of 1914.

By late April of 1915 freight rates were low and hard to find on the Great Lakes and the owners thought about taking the schooners Cora A. and Quickstep into the Atlantic coastal trade. In early May, Milwaukee papers were reporting that Captain James Erickson along with Theodore J. Kjeldaas wanted to make trans-Atlantic trips from America to London or Norway where big profits could be made. It was the beginning of World War I and James Erickson even boasted about flying the Stars and Stripes on the high seas. The Cora A., being a topsail schooner, would be a good ocean-going vessel. A topsail schooner is a transitional craft between a barkantine and a schooner.

On May 17, 1915 her papers were surrendered at Erie, Pennsylvania, cause “Going into Ocean Trade, Temporary Register Issued.” A temporary Certificate of Registry was issued to the same owners the same day in Erie. The Cora A. in July of 1915 sailed to Port Arthur, Ontario Canada for a load of lumber consigned to a New York party in command of Captain Swanson. 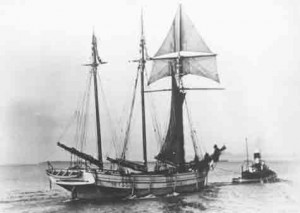 The Cora A. being towed by a tug in Port Arthur, Ontario. Photo courtesy the Thunder Bay Sanctuary Research Collection. (CA7)

On October 9, 1915 the Certificate of Registry was surrendered in New York City, New York. Cause of surrender: “Ownership, district and trade changed.” The new owners were Raymond P. Trundy, managing owner, and Daniel T. Gilmartin of New York, trading under the name of Gilmartin & Trundy. They surrendered the enrollment in Norfolk, Virginia on February 9, 1916. It is interesting to note the first enrollment for the Cora A. was written by a quill pen while the last was typed – just another example of the changing times at the turn of the century.

The end to the Cora A. is sketchy. Some historians say she was caught by a gale March 6, 1916 400 miles from Cape Hatteras, others say 100 miles from Virginia with all hands saved. Yet another writes that she was lost in 1923. No U.S. document survives to confirm her final owners.

One historian gives a location for the wreck of the Cora A. as 36 degrees, 42 minutes north latitude and 57 degrees, 18 minutes west longitude. This location is 900 miles east of New York City and northwest of Bermuda. In theory, the documentation could have been transferred to a neutral country in World War I that would less likely be attacked by German ships. This would explain the U.S. documentation ending on February 9, 1916. Being a small commercial vessel from a foreign country and sinking so far off of American waters it would receive little or no coverage from eastern papers. So the end of the Cora A. is still a mystery and one I will keep on searching for answers to.

The Cora A. is listed on many Web sites with information; some information will not agree with this column. This column was written using complete vessel documentation from the National Archives in Washington D.C. and primary research material. I would like to thank the Alpena County Library for use of the Cora A. photographs. The new Great Lakes Maritime Collection was a collaboration between the (NOAA) Thunder Bay National Marine Sanctuary and the Alpena County Library to put marine historian C. Patrick Labadie’s collection online, which contains thousands of photographs and ship histories. For information on this or many other vessels checkout their website at alpenalibrary.org.