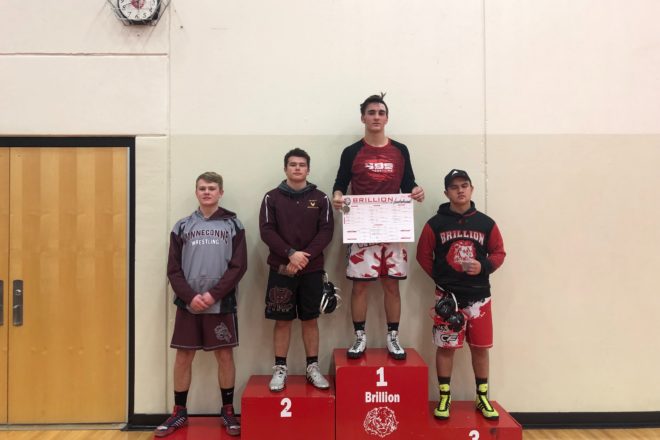 Jeremy Jorns of Sevastopol has his eyes set on a return to state. He’s off to a good start, finishing first at 182 pounds at the Brillion Invitational. Submitted.

Jeremy Jorns doesn’t hold back when he talks about his experience at the Division II state wrestling meet last season: Call it a harsh lesson in reality.

“The state meet last year opened my eyes to how big wrestling really is,” said Jorns, a Sturgeon Bay-Sevastopol (SBS) 182-pounder who lost both of his state meet matches at UW-Madison’s Kohl Center by a combined score of 16-1. “When I walked out of the tunnel, I was in shock to see how many people were in the stands. Unfortunately, I did not perform how I wanted to, but on the bright side, I will be more comfortable this year.”

Jorns has found comfort in the early part of his senior season, with a record of 10-0 after two invitationals, and he finished 5-0 at Saturday’s eight-team meet at Brillion, knocking off Omro’s Jacob Kafer 3-1 in the 182-pound final.

“Jeremy looked solid on the day,” SBS coach Trevor Hasenjager said. “He pinned his way to the finals, where it was a closer match, but he was in control the whole time.”

Nick West finished third at 285 pounds; Peyton Hurth and David Condra were third at 138 and 132, respectively; and Wyatt Coburn took sixth at 120.

Jorns also finished 5-0 and won the 182-pound title at the 16-team Kimberly Papermaker Invitational to open the season. He defeated Kewaunee’s Travis Reinke – a state qualifier in Division III last season – 1-0 in the final.

“This shows me where I am currently in the early season and how much more I have to improve,” said Jorns, a senior who had a 44-6 record last season. “It was a solid win.”

“We started the season off with a limited squad,” Hasenjager said. “We have a few injuries and guys not quite at weight.”

“We have a few weight classes that we are short-handed [in,] which will be tough to make up in dual meets, but we should be able to score bonus points with our older wrestlers to help offset this,” Hasenjager said. “We still hope to finish near the top in the conference. Kewaunee has a strong team, along with Southern Door.”

Jorns’ goal is, of course, to return to the Division II state meet at the Kohl Center Feb. 21-23 – and place.

“To get there, I am going to have to have tunnel vision and focus on nothing but wrestling,” Jorns said. “If you don’t give your all in wrestling, things will not turn out how you want them to. I can’t necessarily prepare for the amount of pressure that is on me when I am on the mat, but what I can prepare for is how mentally and physically conditioned I am.”

“He’s strong and stays in good position, doesn’t make a lot of mistakes,” Hasenjager said. “He had a remarkable season last year but was a little awestruck at state. He has much higher goals this year, and we are planning on seeing him on the podium at the end of the year.”

There are young sports teams, and then there is the 2018-19 Southern Door wrestling team.

“The thing that stands out most about our team is our inexperience,” Englebert said. “With no seniors, this leaves only the sophomore class. They have been a good group, with some middle school and freshman experience. They have shown good improvement from last season.”

Sophomore Griffin Slezewski returns after placing 6th in the 113-pound division at the Division III state meet and finishing with a 34-14 mark. Sophomores Kyle Conard and Grant Englebert return after qualifying for sectionals last year.

Slezewski started off the season with a 4-1 mark and a second-place finish at the Schoenherr Duals in Stratford. Sophomore Austin Falish and Englebert also finished 4-1 and placed second at 113 and 152, respectively.

“The trio has been working hard in the off season at camps and tournaments and hopes to have another good year,” Jerry Englebert said.

The Eagles finished 3-2 as a team in Stratford despite having to forfeit the five upper-weights for numerous reasons.

“We were able to substitute in the light- and middle-weights but did not have a wrestler weigh in above 160 pounds,” Englebert said. “That being said, we won’t make excuses and will look to improve each week.”

In Saturday’s Battle On The Bay in Bay Port, Falish placed 8th at 113, and Englebert placed 9th at 152, finishing off his day with a 5-3 win over Marty Kiernan of Ashwaubenon.