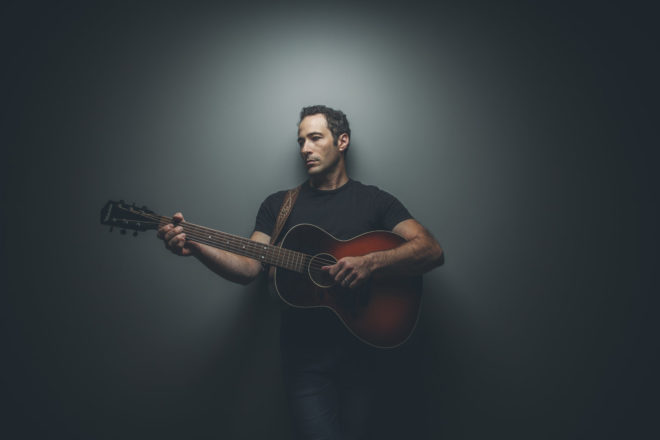 Joshua Davis will be featured during 2020’s first concert at the White Gull Inn on Jan. 8 at 8 pm. Photo courtesy of Joshua Davis’ website.

When Joshua Davis got a call inviting him to audition for the eighth season of The Voice, he thought it was a prank call. But producers of the show had come across his music videos online and thought his folk and roots sound was a perfect fit.

“I wasn’t sure why they were calling me exactly,” Davis said. “I never expected to be on a show like that. It just wasn’t on my radar at all.”

At the same time, working in the music industry is mostly about surprises. It’s both exciting and maddening, he said, but he’s open to it. That’s why he and his wife decided it would be a good move to accept the opportunity.

Davis made his way up to the final four, but singer-songwriter Sawyer Fredericks took the win. Still, being in the competition garnered him considerable national attention. It paved the way for his next two albums and more extensive touring.

Having been a musician since the late-‘90s, with a solo career to parallel his work with other projects (like with the roots group Steppin’ In It), he was no stranger to life on the road.

“There’s nothing I like better than playing with great musicians,” Davis said, “but there’s a freedom that playing solo affords me that I don’t get playing with other musicians.”

His career has brought him all over the world to places such as the Middle East, China, Malaysia and South America. Even in the beginning, he was performing in 200 shows a year.

But much of his early songwriting started in Michigan. Davis’s mom lived in Detroit and his dad lived in the upper peninsula. His songs often emphasized the dichotomy between the industrial, urban landscape and the northern natural beauty.

There’s a strong music collaborative in the state, he said, and that community played a formative role in his own attitude toward music. When it came to working with other musicians on The Voice, bonding with them wasn’t a problem. It was easy. The friendships he made on the show were invaluable.

“It was like being at summer camp, that attitude of where you build friendships with people because you’re together all the time and everybody is working toward the same goal,” Davis said.

Playing for such large crowds with such high stakes was such an intense experience that Davis no longer gets nervous for any performance, or really anything.

“It was so incredibly stressful and nerve-racking,” Davis said. “It was almost like boot camp in some ways, even though I’d been playing professionally for 15 years at that point.”

Now he’s touring for his solo album, Live at the Robin, recorded over two evenings and three live shows at The Robin Theatre in Lansing, Mich.

It was a way to give an unfiltered look into his live show. There’s a lot of storytelling and back-and-forth with the audience, he said. It’s very in-the-moment. Listeners can expect to see that in action when Davis makes his way to the White Gull Inn in Fish Creek on Jan. 8.

He lives in Leland County, Mich., which is basically right across the lake from Door County. They share the same tourist characteristics, so when Davis comes to the peninsula, it’s a little bit like being at home.

Joshua Davis will be featured during 2020’s first concert at the White Gull Inn on Jan. 8 at 8 pm. An optional, pre-concert fixed-price dinner will be served at 6 pm. The menu includes hunter-style chicken with parsley buttered potatoes; kale salad with cranberries, pecans and cider vinaigrette; and Door County apple cake. Tickets for the concert are $25. To buy tickets and get more information about the concerts and optional dinners, visit whitegullinn.com or call the White Gull Inn at 920.868.3517.