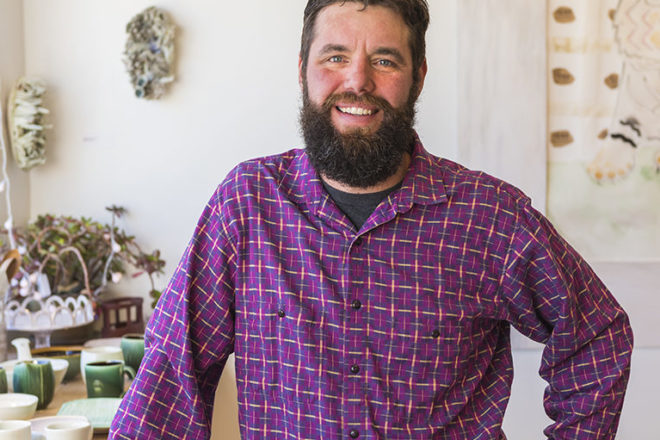 Algoma potter Jimmy Eddings in the James May Gallery, a studio-gallery that he owns and operates with his wife, painter Kendra Bulgrin. Photo by Len Villano.

Any artist bent on making a mark on the art world will acknowledge the inherent risk of their goal. Countless hours spent working on a piece won’t guarantee its success in the market. Rigorous self-promotion won’t guarantee a place in a gallery. And when pursuing an art professorship at a university, a lengthy resume touting accomplishments in teaching, residencies and international exhibitions won’t guarantee a spot at the front of the classroom.

Jimmy Eddings was acutely aware of all of these things. It’s part of the reason his high school self didn’t think an art career was possible. But if you were to walk into the James May Gallery that Eddings owns and operates with his wife, painter Kendra Bulgrin, you would question whether he really ever believed his assertion.

The Algoma gallery is home to not only Eddings’ nature-inspired pottery and Bulgrin’s emotive oil paintings, but to the ceramics, painting, mixed media and photography of numerous other contemporary artists and craftspeople from across the nation seeking exposure in this unique Midwest art space. Beyond that, it represents what is possible when an artist looks to himself to create opportunities that aren’t always available in the art and academic worlds.

Eddings’ love and talent for working with clay was discovered in the art room of Monona Grove High School in the Madison suburb of Monona a quarter century ago. With a knack for hands-on work and a drive to master pottery skills, it proved to be a natural fit for the teenaged Eddings. As college loomed and practical career pursuits took over, he abandoned the hobby. 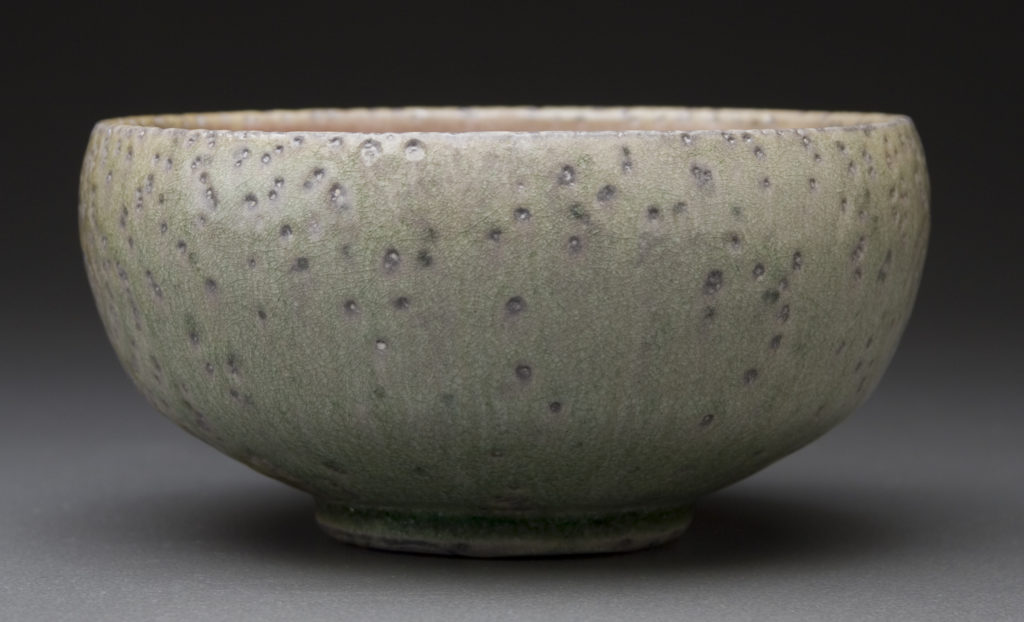 “I just didn’t think it was something I could do for a living,” he said. “I was really interested in natural resources so I was going to school for that but I only lasted two years out of high school and then I started working in construction. I did an apprenticeship program for carpentry and I would say after I worked construction for about four years, I started taking classes in Madison at Lakeside Pottery and started to think about that as a possible profession, teaching specifically.”

By 27, Eddings was pursuing a bachelor’s degree in ceramics at the University of Wisconsin — Whitewater, where he would meet his future wife, Kendra, and leave a lasting impression on his instructors as a principled, experimental and risk-taking artist. Susan Messer, a UW — Whitewater drawing professor and former art department chair, recalled a “memorable” student who generously supported his classmates, had the confidence to strive for big things, and constructively responded to failures.

The next five years would see significant gains in Eddings’ professional life:  a bachelor’s degree in ceramics, running kiln-building workshops at the University of Arkansas, a master’s degree from the University of Kansas, residencies at Anderson Ranch in Colorado and Gullkistan in the South Icelandic countryside of Laugarvatn, and exhibitions from the Upper Midwest to central Texas.

When he returned to UW — Whitewater in 2012 as an academic staff lecturer in ceramics, sculpture and 3-D design, Messer discovered Eddings’ talent for sharing his knowledge with art students, describing a resourceful, service-oriented and easygoing teacher who once voluntarily drove his students and their artwork hundreds of miles to the annual conference of the National Council on Education for the Ceramic Arts.

“He’s immensely creative, persistent, optimistic, resilient,” Messer said. “These are characteristics that I think describe him and really are embodied and present in his artwork.” 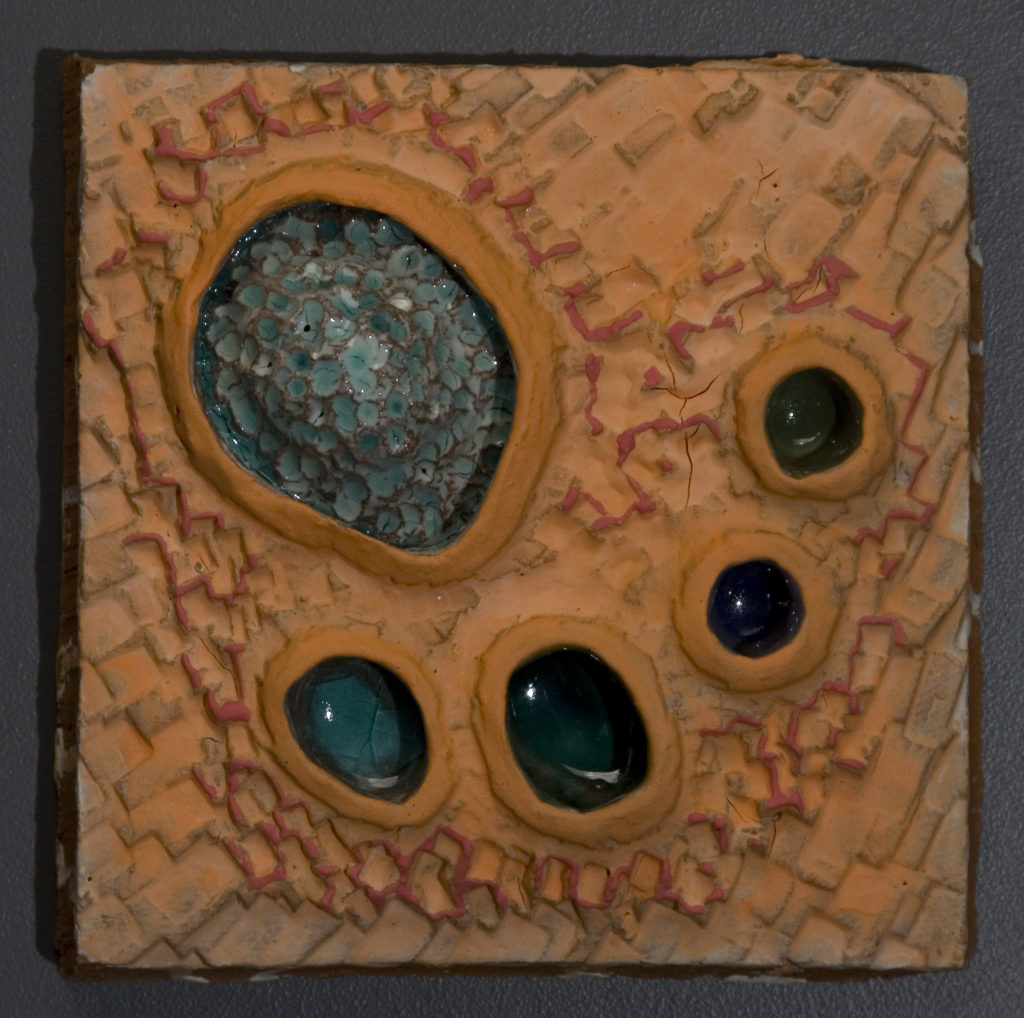 That resiliency would become especially apparent, and necessary, after he and Kendra left their limited term positions with UW — Whitewater at the end of the academic year. By then, they had worked adjunct professorships at four colleges in three years in an ultimately fruitless pursuit of permanent teaching positions.

It was a particularly heavy heartache for the couple, who were raising two young sons with serious health issues and desperately seeking stability for their family. That stability would come in the most unlikely form:  a long-vacant building on Algoma’s Steele Street, a neighbor to Clay on Steele studio-gallery where Eddings had worked a residency in 2012.

In 2014, they purchased the building and spent a year gutting and renovating it into a home, gallery and studio. In May of 2015, the James May Gallery (named in honor of their two young sons, Everett James and Forrest May) was open to the public, marking a major shift in Eddings’ approach to his own work.

“I don’t take myself as seriously as before in terms of, I used to think I’m making this thing and I need to sell it or I need to get it out there,” Eddings said. “And now, owning a gallery, you see so much work come in and go out and Kendra and I have carried boxes and boxes of work and I think, oh my gosh, I make this stuff and it might be exhibited for a week or a day and then it goes back in the basement. It’s kind of depressing when you think about it but on the other hand I think about, well, why am I making it? I’m not making it necessarily to exhibit it. It feels good while I make it, I like the end product and if someone else can enjoy that, great, that’s good…in terms of my own work, I still have tons of ideas, I still want to make it, it’s nice when people get to see it but I don’t put the pressure on myself as much as I did before. There are a lot of other things happening and I know I’ll get to it.”

But when he does get to the studio, usually after returning from a full day’s work at Miron Construction, his mission is to create functional and sculptural works inspired by his observations and interactions with the natural world. And to inspire a sense of discovery in its viewers.

“I hope that there’s some curiosity by the viewer that they’re trying to figure out why the form looks the way it does, the shape, the textures and thinking about how my experiences might’ve influenced those decisions,” Eddings said. 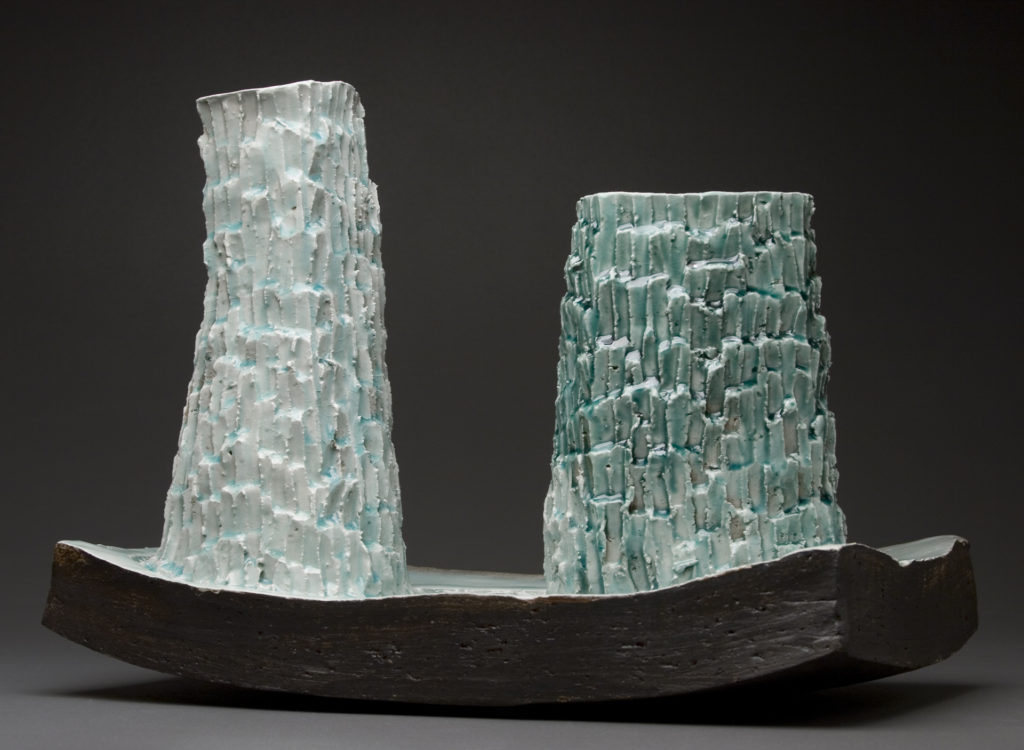 “Snow and Ice” by Jimmy Eddings.

Eddings’ desire to create doesn’t end in the gallery or studio. Since opening James May Gallery, he has set out to build a greater ceramics community in Kewaunee County. In August of 2015, Eddings paired up with a collection of artists to transform Clay on Steele from a gallery-studio to a community arts center offering studio space, a gallery, art classes and community raku firings.

This summer, he will set out on yet another ambitious project:  building a wood-fired soda kiln, a kiln fueled by wood rather than gas, oil or electricity that provides a textured sheen on pottery.

While Eddings admits it is his favorite way to fire his functional pots, he is also drawn to its ability to bring people together for a common purpose.

“There’s a really great community aspect about firing wood kilns,” Eddings said. “You need to have someone stoking that kiln the whole time so it usually takes a group effort and it’s neat to see a bunch of people come together to fill the kiln and then fire the kiln so I’m excited about having that.”

Once established, the kiln will offer a new approach to a budding Algoma ceramics community and yet another opportunity for Eddings to share his passions for art and community, and to honor the artist and teacher within.