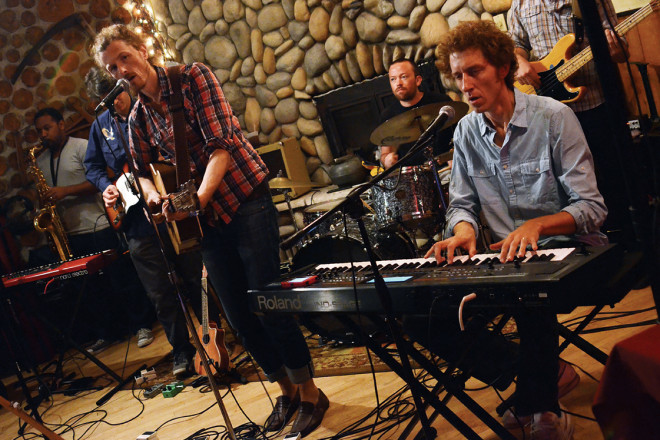 In the thick dreaminess of an August night in 2010, a group of musicians retreated into a cabin on Washington Island to record an album. Wrapped together at the core of this late summer night, they laid down the tracks in three days for what was to become their fifth album, Mountains/Forests, born from the grittiness of Chicago streets, Midwestern roots and “island time.”

The band was JT and the Clouds. Their story has the makings of the stuff of Door County lore, with a sound as eclectic and vivid as the landscape of the island.

Original band members and brothers Jeremy and Drew Lindsay spent their childhood summers living on the island, leaving their other home, Toledo, Ohio, behind for the summer months. Washington Island musician and “mayor” Julian Hagen recalls seeing them as children come to watch him play.

“We would play at the Red Barn and different places all over the island, and Jeremy and Drew would come in to hear the music. They were such nice kids. Back then, I would bend over to give those little guys hugs. Now, we laugh, because they have to bend over to hug me,” said Hagen.

As grown men, each more than six feet now, the Lindsay brothers continued to appreciate and develop their sound as musicians. Jeremy went west to San Francisco to explore his music, while Drew, then a junior in high school in 1997, returned to the island to work as a trimmer at Hansen’s Christmas Tree Farm, while friend and fellow Ohioan Dan Abu-Absi worked the line at Nelsen’s Hall. In the evenings, Drew would come in to wait tables. After a long day’s work, Dan would lose the apron and they’d play some music. The duo, along with islander and fellow tree trimmer Matt Grandy, would become the Blue Spruce Band, aptly named for their day job.

Dave Ellmann, owner of Camp David and the Fishstock Music Series in Fish Creek, heard them play that first summer. 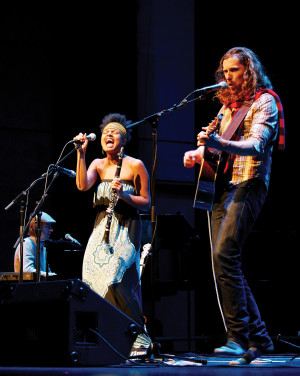 Jeremy Lindsay and Allison Russell perform together as Birds of Chicago. Photo by Len Villano.

“Julian and some of the guys used to practice in this fish net drying shack at North Harbor on the island that had this upright piano in it – the piano was as old as the building probably. They would go up there and jam, and I would listen, in this cedar shake shack. That was the first time I ran into those guys, and I knew I was hearing something special.”

The Blue Spruce Band took its sound back to Toledo. Three summers later, older brother Jeremy came back to the island, playing with his little brother and other band member for the first “real” time. Together, what would become JT and the Clouds began to form. They gained momentum, making a name for themselves locally playing on the island and the mainland at Fishstock.

“When I started the Fishstock series, I had them play upstairs for no more than 20 or 30 people. I did that for years, but then it got too big and we had to move them downstairs. They’ve been playing with Fishstock since the beginning, and no matter how long I have Fishstock going, those boys will have a gig here,” Ellmann says.

When Jeremy was looking to make a change from his home base in San Francisco, Drew and Dan urged him to join them in Chicago, which he did.

“For a couple years, it was Dan, Jeremy and I writing songs. When we started recording our first album, Delilah, we were using various musicians, but we started to fill out a band around us,” Drew recalls.

Other band members followed. Mike August on drums. Then, fellow Toledo native Chris Neal, horn player extraordinaire. The sound they developed in those years, and are continuously and fluidly coaxing to evolve, is blissfully impossible to pigeonhole. They’ve been compared by reviewers to the likes of Sam Cooke, the Band, Bon Iver and Jeff Buckley, but it’s clear that attempting to fit their sound and their persona into a tidy niche is a worthless exercise.

Concert promoters have characterized them from soul to rock, or from gospel to roots music. Their Americana sound is one of a kind; in the span of a single show, listeners may find themselves reveling in the haunting harmony of Jeremy’s edgy voice or flinging their shoes off to stomp to the inferno of soulful energy coming from the stage.

“JT and the Clouds have a sound that no one has. I deal with music, and it’s almost impossible to define what they are. It’s very entertaining, it’s very sophisticated, it’s home brew, it’s intellectual, it’s heady, it’s rockin’…it has so many facets. It’s like looking at a diamond. And they are a diamond in the rough. They’re so individual, which is a good thing. Too many bands out there sound like everyone else, because they’re convinced they are talented. Those people don’t have as much raw talent as those boys do. I think it comes from family, from a lot of soul searching, and they’re an island brew! Sometimes all you need is where you come from. There’s only one Washington Island,” says Ellmann.

Each of their albums has been conceived with a particular tone or a concept, each one adapting an ever-changing variable to the sound. Drew, whose primary instrument is the piano, but who also plays myriad instruments including the accordion, noted how their music is created.

“In some senses, when you listen to singer-songwriters their songs will go in different directions but sometimes you don’t think of them as different genres…so Jeremy does all the lyrics, with a melody or rough chord structure in mind. We’re all equal voices. Jeremy is a songwriter. It’s just his inherent, natural skill. It’s effortless. The band interprets his lyrics in different ways.”

Their sound took an organic turn when the band recorded Mountains/Forests that August. A buddy loaned them the cabin, surrounded by golden prairie grass and island moonlight. The entire album was recorded live, down to the singing crickets in the background of tracks such as “Roll Tide.” The island is alive and well in their music, and has been from the beginning. 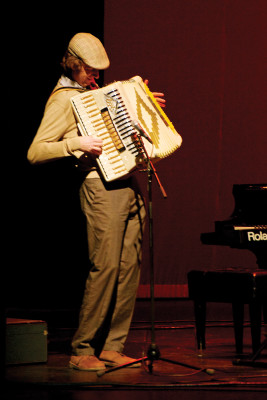 “In a serious way with Drew and Dan, the Door –Washington Island in particular – is a place of healing, rest, rejuvenation for us…I miss it terribly when we’re gone too long,” says frontman Jeremy, now going by JT Nero.

Along for the ride on that trip was Allison Russell, a touring buddy and member of kindred band Po’ Girl out of Vancouver. During the live recording of that album in the woods, JT Nero and Allison discovered the symbiosis of sound they created and knew they’d struck onto something. Allison, or Alli, began to play with the Clouds, adding her pure and soaring vocals to the mix.

“She’s just filled with energy. Aside from the fact that she has this incredible voice and she’s beautiful…Alli has that energy that just exudes out of her,” Hagen says.

As Alli and Jeremy played and toured together, they discovered that this collective was bound for everywhere. Touring under the name Birds of Chicago, Alli and Jeremy have played gigs as close by as Ohio and California and as far-flung as Scotland and Ireland. Their collaboration has earned them accolades as some of the most relevant emerging roots musicians. Their hometown paper, the Chicago Sun-Times, called them “two of the most compelling new voices in Americana roots music.”

Over the years, the band has taken on numerous forms and members, gaining new musicians such as Chris Merrill and losing founding members such as Matt Grandy. Although, if you’re lucky enough to catch the band up on the island, often Matt will get called to the stage from the audience to sit in on one of their perennial covers, “The Weight.”

Whether the band is in its full-blown incarnation of JT and the Clouds, or whether it’s JT Nero and Alli Russell sweeping us away into an evocative groove, at its core, there’s something inimitable about them. It’s hearing a gifted songwriter paired with a melodic songstress and the exuberance of a live, roots band doing what they do best, take us all along for a rocking, soulful ride.

They’ve played all over the place, have adoring fans in all corners of the world, but some locals still remember and smile at the band’s modest roots.

“They’re funny, sweet, smart guys,” Hagen says. “After they’d play a gig, they’d head up to Rangeline Road and play softball together. They’d mow that field down and just have a good time. They’re an important part of the script up here. They were a piece of my life’s puzzle.”

JT and the Clouds, JT Nero, the Blue Spruce Band, Birds of Chicago…whatever you call them, or whichever album you’re listening to, have roots that run deep. While they’re all serious musicians, they haven’t lost those roots. Ellmann recalls how those early gigs up at the Red Barn used to end.

“You know, playing music in the summer is hard work. After the guys were done playing we’d wander across the street to skinny-dip in Detroit Harbor. There’s a perfect, sheltered sandy spot. With those guys playing music [it] was always fun. I’ll bet our laughter is still bouncing around in those cedar trees.”

JT and the Clouds 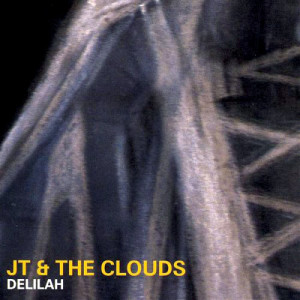 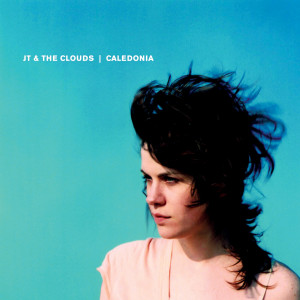 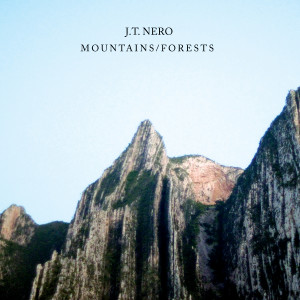 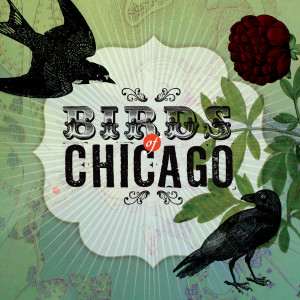 Albums are available at live shows, on iTunes and through the bands’ websites: jtandtheclouds.com and birdsofchicago.com