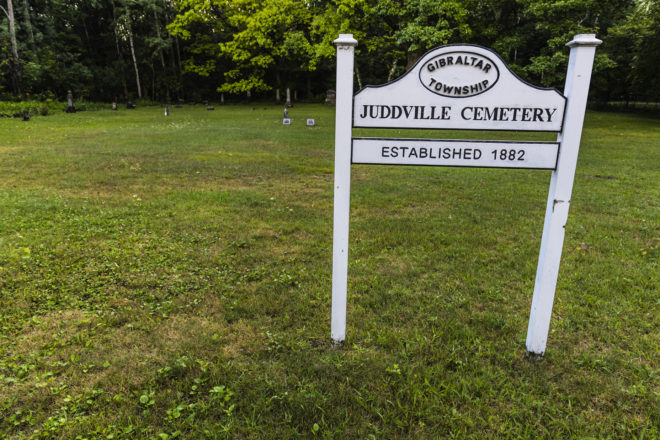 If you blink while driving between Egg Harbor and Fish Creek, you could easily miss the quiet, unincorporated community of Juddville.

You would not know it today but at one time it was a hardscrabble farming community of Scandinavian and Polish immigrants.

Connecticut native Josiah Judd forever put his mark on the Door County landscape when he became the first resident to settle in the rocky, wooded southernmost section of the Town of Gibraltar that eventually was named for him — Juddville.

When Josiah Judd died at the age of 87 on Feb. 6, 1923, a newspaper of the time reported that he had made his home in Door County for 59 years, which would have meant he arrived on the peninsula in 1864. The area at that time was described as a primeval wilderness. When his wife, Mary, died at the age of 85 in February 1921, two years before her husband, a front-page news story suggested “the couple possibly being the oldest married couple in the county at the time of her death.”

Judd, a farmer and fisherman, purchased bay shore property between Juddville Road and where Peninsula Players Theatre is today.

For a time Judd and his family were the sole inhabitants but in 1869, Nicholas Kihl (who later changed his last name to Kill), a Civil War veteran from New York, became the second settler in Juddville. Had he been the first to settle in the area, it might be known today as Killville.

Kill is credited with starting the first cherry orchard north of Sturgeon Bay. His death at age 91 in July of 1936 was front-page news because he was the last Civil War veteran in the county.

Kill’s gravestone can be seen at the tiny Juddville Cemetery on Gibraltar Bluff Road, right next to Kihl family members.

Sometime in the 1960s, Olaf Olsen, Nicholas Kill’s grandson, was interviewed about growing up in Juddville. He recalled picking cherries green from his grandfather’s orchard so they wouldn’t spoil during the boat trip from Juddville.

Olsen said there were no wells when he was young. Instead, people hauled their water from the beach, cutting holes through the ice in winter. Juddville residents also drove their cattle to the bay to drink.

He described a hard existence from fall to spring, with people purchasing goods “on the hook.”

Olsen also recalled walking to Fish Creek to sell berries because, as he explained, the people with money settled in Fish Creek because Juddville was too wind-blown for them.

Two piers were erected on Juddville’s shores in the 19th century. One of those was co-owned by E.S. Minor, who went on to serve six terms as a U.S. Congressman and two terms as mayor of Sturgeon Bay.

Today the hardscrabble aspect of the original community known as Juddville is but a distant memory. The former one-room schoolhouse once attended by Juddville youth is now home to Juddville Clay Studio Gallery. Across the highway are Emerson Chiropractic and Wellness, Villaggios Italian restaurant and Kitty Korner, to name just a few places that call modern-day Juddville home.