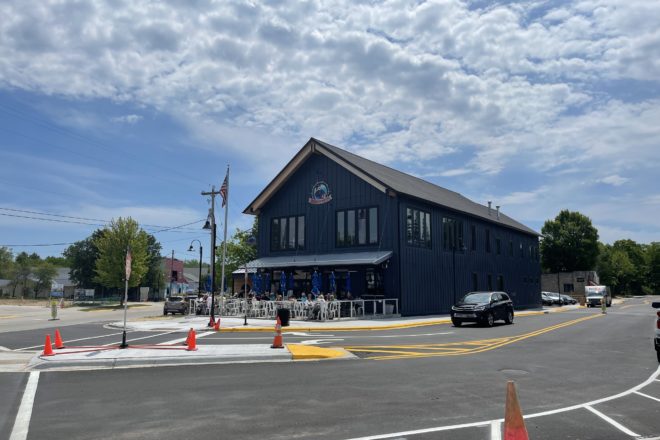 Shipwrecked Brew Pub in Egg Harbor may get its expanded beer garden after all.

In a decision issued Aug. 17, Door County Circuit Court Judge Todd Ehlers overturned the village’s denial of a permit for Shipwrecked to build a large beer garden adjacent to the restaurant in the center of Egg Harbor.

In October 2021, the Egg Harbor Plan Commission voted 4-2 to deny a conditional-use permit (CUP) to the owners of Shipwrecked Brew Pub, named in the lawsuit as Sojenhomer, to add a 92-seat outdoor beer garden adjacent to the pub on the former Christine’s Casuals property, which the owners purchased in 2020. The denial was issued based on several reasons, but particularly the lack of parking, safety concerns at the Highway 42 and County G intersection, and lack of compatibility with the village’s comprehensive plan.

In his decision, Ehlers did not comment on the merits of any of the specific reasons the village cited for denying the permit.

In reviewing the record of the plan commission proceedings, Ehlers determined that there was bias on the part of the plan commission against the Shipwrecked proposal. He based this on the comments and actions of Chris Roedl and Jon Kolb, who initially recused themselves from the review of the application due to a high risk of bias based on their earlier comments against the project. Kolb later rejoined the committee for its decision.

Roedl remained recused from the commission, but Ehlers determined that his statements and emails to the commission constituted involvement in the proceedings. Together, he said, “The actions of these two members constitute grounds for reversal of the decision. There has been violation of fundamental due-process rights.”

“The cards against Sojenhomer’s application were stacked against it from the start,” Ehlers wrote in his decision.

Ehlers wrote that he did not believe there was malicious intent on the part of the plan commission or the village, but he concluded that the bias could not be cured through any action other than to grant the permit to Shipwrecked outright.

Shipwrecked has 11 parking spots for its existing 302 seats, but it is grandfathered in for that use. Though a restaurant or tavern has existed on the Shipwrecked site for more than a century, the CUP process was triggered when the owners sought to combine the restaurant with the neighboring parcel.

When that happened, the plan commission had to evaluate it as an entirely new project, which negated the grandfather clause. That meant Shipwrecked would then need to meet its full parking burden of 105 parking spaces.

The proposal aimed to meet that with 27 on-site spaces; 13 off-site, shared parking spaces at Fat Louie’s across the street; and six at its employee-housing complex at the south end of the village (formerly the Cape Cod Motel). The remaining 59 spaces required would be met by paying the village’s $50-per-space fee in lieu of parking (FILOP). The village later raised that fee to $250 per space, but Shipwrecked’s proposal was made when the $50 fee was still in place.

In making the motion to deny the permit, plan commission chair Cambria Mueller cited the lack of parking and the unreasonable amount requested through the FILOP, the congestion and safety concerns of intensifying the use at the Highway 42 and County G intersection, and the inconsistencies with the village’s comprehensive master plan.

Egg Harbor village president John Heller said he was disappointed in the decision and that the village will appeal.

“We are exploring options to go back to the judge and request he consider other options he didn’t take into account,” Heller said. “I kind of think that this was the low-hanging fruit, so he did it this way.”

Shipwrecked general manager Joe Smith, a former village trustee, said in an email that he and Shipwrecked’s owners had no doubt the judge would agree with their position in the case.

“The addition we have designed is beautiful and is going to be a great fit for the downtown corridor of Egg Harbor,” Smith said.

He said they hope to have the new space ready to use in 2023.