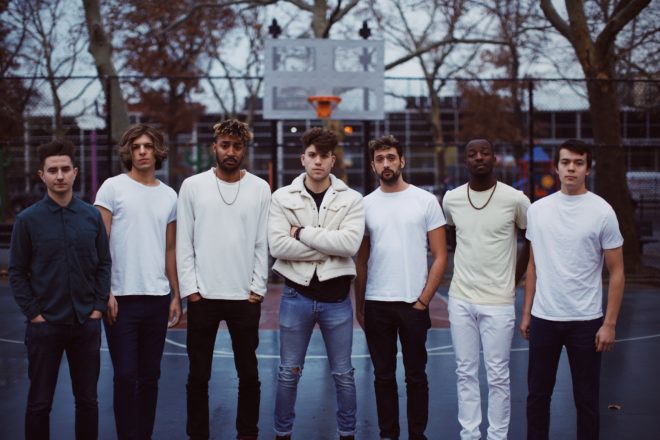 Photo by Off Season Creative

Many artists prefer not to be bogged down by labels – especially about genre – and this has not rung more true than for the Boston-based Juice, a seven-piece band that truly can’t be pinned down to one category.

The Peninsula Pulse spoke with guitarist Daniel Moss about how the group members met and how their music meshed.

Juice is perhaps one of the biggest boy bands out there in terms of numbers. Ben Stevens is on lead vocals, Michael Ricciardulli on guitar, Rami El-Abidin on bass, Christian Rose on violin and vocals, Kamau Burton on acoustic guitar and vocals, Daniel Moss on guitar and Miles Clyatt on drums.

They all met at Boston College, and mostly by luck, Moss said. A few of them roomed together, lived on the same floor or got connected through other friends. Everyone had also had some sort of musical background going into it, but no one expected music to become a full-time job after college.

For them, Moss said, Juice was just their thing, as somebody might join a recreational sport. They spent weekends in the studio, found places to practice and filmed videos on campus.

The band defines itself as a “boy band super rock group” – and one that derives inspiration from genres such as rock, hip-hop, rap and pop.

On “Audrey Tell Me,” funky bass lines are paired with R&B vibes from the lead singer’s voice, laid over a pop template. “DAVE (turn the music down)” is a blend of more slow, groovy bass lines with a fun rap overlay.

“We just want to make modern music with instruments, and whatever form we think is best for that particular song we’re creating, we go with that,” Moss said.

Though the band recognizes that having a brand is important, it’s shied away from that notion because brand is so closely entwined with genre. Its members recognize the difficulties of creating a brand with such a diverse group.

The members grew up listening to loads of different music, too, from Drake to the Eagles.

“We make music like we consume it,” Moss said.

Now the boys are making music full time and touring in support of their work. Their first significant, big show was at Summerfest in Milwaukee, where Moss is from. Juice entered its music in a contest and won, landing a slot on the Miller Lite stage in 2016. The group will be playing there again July 5 as part of its Whats Ur Genre Tour.

This summer, Juice’s members are looking forward to releasing an EP, and it’s their first time going international, with a date to play in Canada. Moss said with a laugh that it may be only one date, but it counts for them.

He’s excited to play at Summerfest again and in Baileys Harbor, where he grew up visiting his grandmother.

“I’m excited that we’ll get to play up there,” he said. “It’s going to be really cool.”