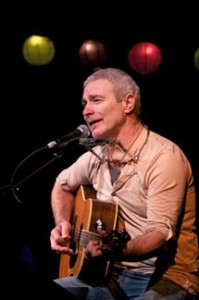 Julian Victor Hagen was born on November 20, 1956, on Washington Island, the youngest of Jack and Marcella Hagen’s three children.

His two older sisters, Leila and Linda, their husbands, six children and 12 grandchildren, with Julian and his wife, Diana, perform regularly on the island and down the county as the Hagen Family Singers, bringing the Hagen Family Christmas to the Third Avenue Playhouse in Sturgeon Bay each December.

Since the opening of the Trueblood Performing Arts Center (TPAC) in 2004, Julian has generously donated his time and talent to raise funds to support this unique island resource. The Hansens and the Hagens, both extremely talented and beloved musical island families, entertained at the grand opening of the TPAC in July 2004

Julian served on the first Board of Directors of the TPAC after its grand opening; and, over the years, he has brought incredible artists to join him on stage at the TPAC and at many other venues on Washington Island and in Door County, to “live it up” with audiences young and old and in between.

I met Julian when we came to the island many years ago. It was then I heard, and started singing along with Julian’s original, “Northern Lights.” The chorus spoke to me then and ever since. Like some kind of foundational commitment to being alive in the moment, carpe diem.

Because we will never have this time to live again,

So why not live it up while we can

‘Fore there’s less time than before

And I don’t know how much more

And I know we’ll never have this time again

So how did a junior in high school come to write such a poignant verse while milking cows before going to school?

Julian was nice enough to spend some time with me over coffee at the Red Cup reminiscing about the genesis of “Northern Lights” and the life it has taken on since 1973.

Talking to Julian about growing up, you are transitioned back in time to a world of hard work and joy and enthusiasm, in which music and singing was ubiquitous. The family was always singing. After a day in the field bailing hay, Julian and his friends would all go back to the Hagen farmhouse for an evening of singing, with Jack leading the sessions on his guitar and accordion. The evening group often included the following contemporaneous teenage musicians that taught each other to play better and better guitar over the years: Dan and Jens Hansen, Jeff McDonald, Bill Schutz, and Edward and Rich Sheehy.

Julian recalled that Pastor Gaul, at the Bethel Church on the island, was a big influence. A humorous and grounding person, whose real life stories of hardship and adventure, gave credence to his sensitive preaching of the beauty of God’s world and love, eschewing dogma.

“Northern Lights” was originally written as a poem, which Julian turned in to Clara Jessen, his teacher. Clara, one of two teachers in the high school, loved the classics and books, and instilled a sense of the profound and philosophical perspective so prominent in Julian’s songwriting.

However, the poem, which over the next 40 years would, in the words of Norbert Blei, become part of the “essential nature” of Washington Island and Door County, performed at weddings, funerals, graduations and celebrations of all kinds, did not receive an “A” grade.

Virtually every Julian performance includes a familiar rendition of “Northern Lights,” with folks joining the chorus and often standing and swaying to the 3-4 waltz rhythm.

Exploring with Julian what may have been the underlying impetus for the lyrics, he recounted how he would get his sister, Leila, up for a motorcycle ride at 1 am in the morning to go down to Schoolhouse Beach to quietly watch the dancing lights in the north sky.

Laughing and dancing, yet tears in my eyes,

I’ve watched the Northern Lights dance in the skies

To a simple freedom song.

Twisting and turning, yet calm all around

They’ve made my feet never touch on the ground.

Yes, they’ve made me dance along.

He also talked about his sense of loss each year when the high energy and happy friendships of the summer would come to an end. Every year folks came and went. Friends from the island and off-island would get together and play music and sing almost every night during the summer at the Schoolhouse Beach campground. Then suddenly that would be done, until the next year, with “less time than before.”

As explained by Julian in “Julian Hagen & The Nature of Door” by Norbert Blei: “Living it up while we can, celebrating friends, life and nature, I just remember being aware of how blessed I was.”

A sentiment we all feel and recognize in ourselves each time we join with Julian in singing “Northern Lights.”

For more information or to check out a complete schedule of events, visit truebloodpac.com.