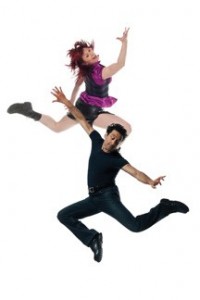 “It was wonderful,” recalls Nikoupolis. “It was really great for the students, to open this other world of dance, have different teachers. Through my training I was fortunate enough to study under a wide variety of artists that really broadened my dance horizons. For my students to be able to have different teachers opens their eyes.”

Working with JRJP was also “fun,” according to Nikoupolis, “for lack of a better word,” she laughs. “They’re very sweet, inspiring. They showed movie clips and talked a lot about energy. How dance is not just a presentation but a conversation.”

On March 6, JRJP will return to Door County, this time to perform at the Door Community Auditorium. They will showcase their signature style, which incorporates dancing, singing, and story telling to the beat-driven sounds of the blues, swinging jazz, funk, hip-hop, and world music. The New York Times says JRJP “captures the exuberant physicality of good dancers when moments of extreme control and abandon are seamlessly combined.”

“Watching them interact with each other in their dance,” says Nikoupolis, “it plays into something everyone can relate to. It’s like a fun conversation. It’s more than just dance, but energy that is really infectious.”

The performance will begin at 7pm. Tickets for the show range from $18 to $28 (buy one get one free if you order by phone or in person!). Advance reservations are recommended and can be made through the DCA box office, located at 3926 Highway 42 in Fish Creek. The box office is open Monday – Friday, 12 – 5 pm. Tickets can be purchased in person, on the phone at 920.868.2728, or online at dcauditorium.org.

JRJP was founded by Billy Siegenfeld in New York City in 1990. Three years later, after joining the theatre and dance faculty of Northwestern University and re-locating to Chicago, Siegenfeld expanded JRJP into an ensemble of performer-teachers and built the company’s life-affirming mix of percussive musicality and vocal-rhythmic dance into a new performing arts pedagogy called Jump Rhythm Technique. Today, the technique’s “rhythm-first” system of movement-and-voice training is taught worldwide in community centers, after-school programs, private studios, and colleges.