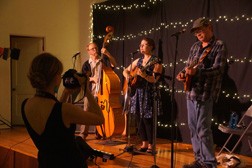 June Falling Down, a feature film made in Door County in the summer and fall of 2014, will host its premiere on the night of Sept. 19 at Ephraim Village Hall.

The film, a mix of comedy and drama, centers around a young woman returning to Door County for her best friend’s wedding and the one-year anniversary of her father’s death. Rebecca Livengood (Weaver) wrote and directed the film, and Chris Irwin assistant directed and produced. The movie features local talent Nick Hoover, Claire Morkin, Evan Board, Justin Pahnturat, Elliot Goettelman, Joanna Becker, and Steven Koehler, as well as countless other Door County actors, musicians, and extras.