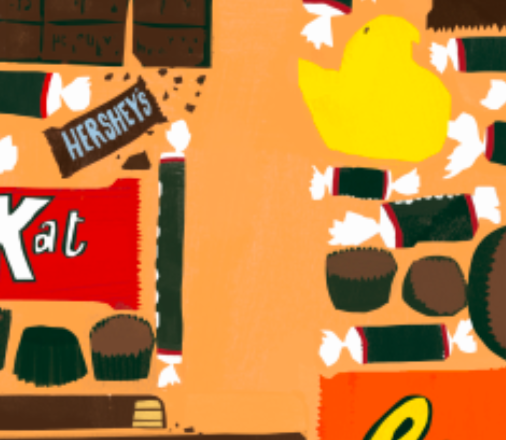 Just because trick-or-treating will be minimal at best this year, that doesn’t mean you should skip the candy purchases. Instead, have a spooky night at home pairing your favorite candies with some delicious beers!

Pairing beer and food is almost never a one-perfect-pair situation, and often, many types of beers highlight different aspects of the paired food. For this candy-pairing list, I’m picking a few of my favorite Halloween candies to pair with some of my favorite beers.

Halloween candy is full of chocolate options, whether that’s the classic Hershey’s milk chocolate bar, dark chocolate or even Tootsie Rolls! The thing to consider for pairing here is the intensity of the chocolate.

Creamy milk chocolate that coats your mouth pairs well with a fruited lambic sour such as Lindemans Framboise – a Belgian-style sour called a lambic that has added raspberries. Lindemans back-sweetens its lambics, which means that extra sugar is added to counter the tartness.

This extra sweetness pairs nicely with sweet chocolate, and the light tartness cuts any heaviness. Pairing red fruits such as raspberries with chocolate is one of my favorite combinations, and the prevalence of chocolate Halloween candy makes it the perfect time to try it out!

Lighter Tootsie Rolls could pair with an English mild such as the Born and Raised in East De Pere from Madison’s Young Blood Beer Co. This beer is malty but light, with a little dark fruitiness to make that Tootsie Roll really pop!

Dark chocolate candies go nicely with a roasty stout that matches the more bitter chocolate, but also brings out some of its sweetness by contrast. I recommend the Satin Solitude from Central Waters. This imperial stout is not heavy, and it has an easy cacao taste and creamy body.

Unless you’ve been living under a rock for the last few years, you’ve no doubt seen many peanut butter porters on the market. This is because peanut butter and chocolate are a match made in heaven.

If you want to get peanut butter crazy, I recommend the Nitro Peanut Butter Porter from Copper State Brewing Co. in Green Bay. The nitrogen gas makes this beer extra creamy, without making it overly heavy or sweet.

If you want to take it easier, though, try a plain American porter. Roasted grains cut the creamy, rich Reese’s and accentuate the beer’s chocolate sweetness. Deschutes’ Black Butte Porter is a classic that fits the bill beautifully.

Forget the pumpkin-spice latte – grab yourself a pumpkin beer this fall instead. This style is heavily disputed among beer drinkers, but I promise that if you give it a try, you might find one you like! Many pumpkin beers are made with the pumpkin itself, pumpkin-pie spice or both. I’ve tried some this fall and found a few new favorites.

Pumking (also available in nitro) and Warlock are two pumpkin beers from Southern Tier Brewing Company in New York that feature pumpkin puree and pumpkin spice. Warlock uses the same recipe as Pumking, but it’s been adapted as a stout to feature a maltier base. These beers aren’t for the faint of heart, though, clocking in at more than 8 percent ABV (alcohol by volume) to counter the sweetness with a touch of booziness.

A controversial pumpkin beer among customers at the Ephraim Coffee Lab is the Wendy Coffee Pumpkin Milkshake IPA from Central Waters Brewing Co. This beer is actually made to mimic a pumpkin-spice latte. Although I don’t think it hit the mark, it’s surprisingly good, with strong pumpkin spice, a bready body and a touch of sweetness.

To pair these pumpkin beers, let’s bring it back to the original: pumpkin pie. If you ended up with some Peeps in your Halloween candy mix, try them with a pumpkin beer. The creamy, rich marshmallow helps to create the idea of a rich pumpkin pie, but the pumpkin-pie spices cut its sugariness.

If you’re not a Peeps fan, try a Kit Kat, the inner wafer layers of which are surprisingly similar to pie crust. The extra chocolate keeps the pairing on the sweeter end as well.