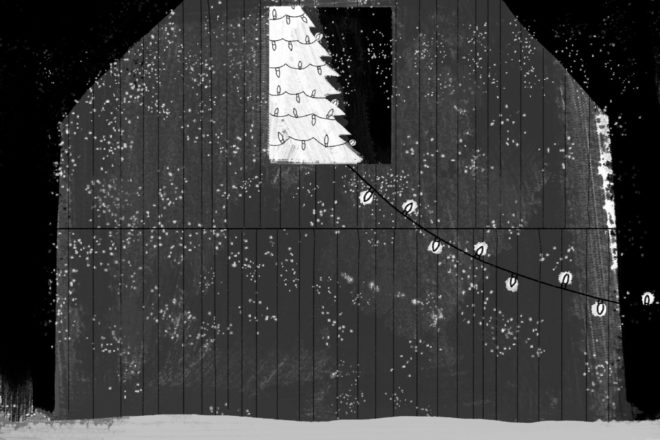 The Tree In the Barn. Illustration by Ryan Miller.

My father was a curious man, perhaps strange, perhaps odd, the streak of oddness as routinely happens to dairymen. A lifetime of what ungodly early mornings will do to you, as will the abiding love of cows. My dad loved his cows. Our father went into a Zen state at evening milking, as could less charitably be characterized as semi-robotic. To admit a lot of what happens on the farm is in the Zen state. So was the barn radio in a Zen state, glued and screwed to the self-same station, one frequency only, then referred to as the state station. To include the morning weather round-up, School of the Air, Chapter a Day, the University lecture on Russian history or Grecian urns, the evening concert. I have long wondered if the evening concert was designed to coincide with the milking hour of this place called America’s Dairyland. In our barn the evening concert was law, more in fact, one of the Ten Commandments, as said “glued and screwed.”

Years later in a science article I read of research in let-down, the involved musculature and state of mind (of the cows) that allows the udder sack to relax and transfer milk to the teats. Never mind nobody real ever called them “teats.” To include here the well-known principle that you don’t chase cows before milking, the best let-down occurs if they are fed beforehand. To reiterate, my father was kind to his cows as included Brahms, Haydn, Handel, Mussorgsky, Beethoven, Schubert, Sibelius, Rachmaninoff. This man in bib overalls, his omnipresent engineer’s cap, his ever vigilant pair of pliers, his barn rubbers; who no one would think was well acquainted with Johann Sebastian Bach, if he did sometimes think Bach as being a touch too noisy and antic for evening milking. Classical music’s true authentication of its place in the arts was bovine let-down, the same as how a bad #4 spark plug shows up on an oscilloscope.

I did for the sake of this story warn the reader my father was a peculiar man, again as is appropriate to a dairyman who loves his cows, loves his barn, loves his morning hour, loves the solemnity, the peace of milking. Any who has milked cows knows this chore is not to be rushed, cows being female require romance to do well. Funny it is what a farmkid knows well beyond his years.

Our dad did not sing, even in church he did not sing. To think a dose of Willie Nelson or Woody Guthrie would have done our dad good because they can’t sing either. What my dad needed to know is you don’t have to sing to sing, Leonard Cohen can’t sing either. And the cows don’t care, most females don’t. My dad who did not sing in church did sing to his cows, it was as you might understand a private ceremony. When someone came into the barn he’d stop singing. Even around his kids he was embarrassed to sing, he hummed, sometimes he whistled. But alone with his element he sang to his cows, the self-same hymns he wouldn’t sing in church.

It was that our dad read the Scriptures with some bias, an agricultural bias, a barn bias, a cow and field and fence row bias. He believed Jesus could have done better with farmers as disciples than fishermen and tax collectors. Fishermen fear drowning, farmers fear debt, and while clinging to debris will save you from drowning if not necessarily hypothermia, nothing is like drowning in debt. Would have been a different Bible if Jesus had farmers as disciples, less beatitudes more weed pulling and hoe handle. But then maybe those are beatitudes too.

He was five foot seven, 170 pounds, a robust man, he could hand start a tractor engine singlehanded, fall asleep in an instant, this what 4 am milking will do to you, structurally he ran pretty efficient on oatmeal and water, with the occasional dose of meatloaf that was also mostly oatmeal. On basic principles he distrusted Christmas, thought the holiday excessive, not enough homemade. He was a good part-time carpenter and so pretty good at homemade, to the end Christmas at our house had a homemade tint to it. New kitchen cupboards, new stairs, new flooring, new windows, new porch posts, new shelves in the root cellar, that kind of homemade Christmas.

According to our dad’s take on Scripture, the St. Luke particulars of Christmas were designed for the barn to celebrate, not the house. At his heart my dad was a scriptural purist, since the first Christmas was celebrated in a barn so should orthodoxy ever after recognize. The barn Christmas short-changed ever since. Our dad thought the Christmas tree should be in the barn not the house. Scripture said so. At least implied, which is what theology is all about, implication.

Every year we cut our Christmas tree from the wild swamp of the woods of balsam and yellow birch, the tree hauled home in the manure spreader and duly set up in the bay window of the house. Every year our dad complained and cited Scripture that Christmas was supposed to be in the barn. By inference so too the tree. Every year this same complaint, our mom turned a deaf ear, we kids just thought our dad was goofy. That the Christmas tree is supposed to be in the barn, every year, same old same old.

Eventually we grew up, his daughter off to Chicago with the moron she married. My brothers and I all left the farm but like salmon and swallows returned, chastised to realize what we were cut out to do was farm. The farm duly morphed from a modest Grade A dairy to row crop vegetables, irrigated, the cows all shipped out if some favored few died of old age.

The barn fell silent and disused, yet every Christmas our dad’s old rant of how Christmas was for the barn to do, that how a real Christmas ought be celebrated. Actually it was a touch irritating.

We had heard all this before, every year suffered his pantomime, yet deep down understood where he was coming from. It kinda struck us eventually after some years to give this now old fossil exactly what he wanted. To the end we set up a tree, decorated, lights, tinsel, even presents under the tree, set up in the north hay door of the barn, strung a power cord to reach it. That on Christmas Eve when we gathered at the farmhouse for our mom’s Eve-night tradition of oyster stew and baloney sandwiches surreptitiously plug in that tree in the north mow door of the barn’s flank, the one facing the house, to see how long it would take him to notice.

The house was in full riot mode with grandkids, uncles, aunts, and that single malt flask as passed around beneath our mom’s proper Methodist table. The happy sounds of a family as burst pressure in the wake of our hallowed tradition of that slimy mollusk. To this juncture he hadn’t noticed the Christmas tree in the haymow door. I then realized the mercury vapor yardlight was so bright as to steal our intended show, so between first bowl of snot soup and second I snuck off to the fuse box to relieve the circuit of that yardlight. In more original times farm yardlights had a proper switch, a custom I regret passing, if only all those darn mercury vapors had a manual switch to gain good country dark.

No sooner had I doused the circuit than I heard a commotion from the dining room above me, followed by an obscene loud phrase. Holy manure being the synonym. The tablecloth caught in his belt buckle, dishes were broken as my father burst headlong through the door on his way to a supposed barn fire. He was at this juncture of his life a touch near-sighted and didn’t see the light as a Christmas tree but a fire in the barn. He was by this juncture at a pretty good gallop for a guy of mid-seventies when he realized the barn fire was a set-up, there was a decorated Christmas tree in his barn. And that he could finally shut up about the first Christmas being in a barn that orthodoxy should follow.

He pulled up to a full stop halfway across the yard, now realizing he had been had, turned to see all of us watching this pageant. Like that man who couldn’t sing in church, he couldn’t say thank you to his adoring family. He bowed his head and meekly whispered something to the ethers, maybe it was thank you, maybe an ancient Celtic curse on our sorry asses. As he walked back to the house he did clap us on the back of our heads a touch harder than affection required. And we went back to our supper, to include my second bowl of snot soup and oyster crackers followed by suet pudding. There was as St. Luke described, Christmas in the stable that night.

Justin Isherwood is an award-winning writer, a Wisconsin farmer, humorist, author and contributor to numerous collections and publications including:  Badger CommonTater, Isthmus, and Newsday. His books include: Christmas Stones & the Story Chair, Book of Plough, Farm Kid, and most recently, Pulse.