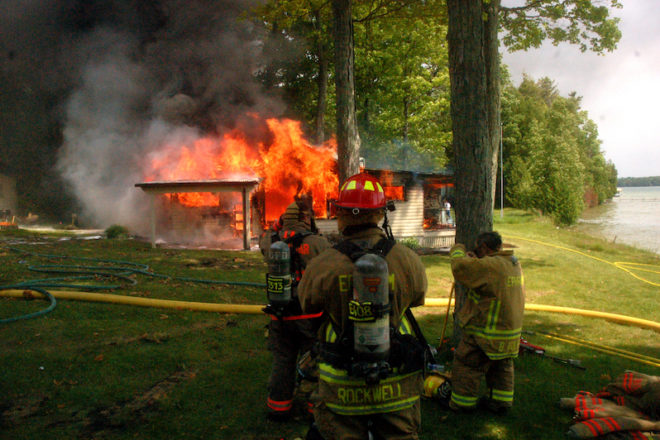 The burning cottage threw intense heat into what was already the hottest day yet of 2018, yet the firefighters are ready to go in their heavy gear. Paramedics were also on hand to make sure the firefighters were OK after each team’s entry into the building.

When Eric Peil’s construction firm was hired to build a new year-round home to replace a seasonal cabin on Kangaroo Lake, his role as assistant fire chief of the Baileys Harbor Fire Dept. kicked in.

Since the old place had to come down, Peil asked the owners, Lee Roy and Diane Kruse, if the department could use the cottage for a couple of training exercises, the final one of which would be burning down the house.

“It’s just a win-win situation for us. They get to practice and we get rid of our cabin,” Lee Roy said on Saturday, June 30, the hottest day of the year to date, while the cottage was being consumed by fire in the background. “Now instead of all the clean-up, we just have to shovel some ashes.”

The Kruses live in Oconto Falls, Wis. They bought the property on West Kangaroo Lake Road two years ago, with the plan to tear down the existing cabin and replace it with a year-round home the couple plan to retire to in the future.

Peil saw this as a training opportunity not only for Baileys Harbor, but for the other departments known collectively as the Mid-Door departments, which include Ephraim, Gibraltar and Sister Bay-Liberty Grove.

The first training session at the cabin was held on June 20. Teams of firefighters entered the smoky building for a search and rescue operation. The second session held June 30 began with fires being started at different locations inside the cabin, and teams of three firefighters entering to extinguish the blaze.

Also on hand were two members of the Middleton Fire Department who are also representatives of HMA Fire, a company that sells ultra high pressure fire suppression systems that are highly mobile. Evan Wing, CEO of HMA Fire, gave a demonstration to the firefighters on how his system works.

Finally, the whole cottage was set on fire and it was quickly consumed in hellish flame while firefighters laid down heavy streams of water to protect the surrounding majestic trees.

The Kruses watched it all from the comfort of deck chairs on their dock, surrounded by boaters and kayakers who were attracted by the smoke and flames.

Teams of three firefighters from the four participating departments took turns entering the building to extinguish fires that had been set in specific locations.

The day began by laying down a steady stream of water between the target home and the much larger home of the adjoining property as fires were started in the back of the home so firefighters could do training exercises in entering a burning building and extinguishing a known event, while learning for the unplanned events they will face in the future.

A Baileys Harbor water cannon kept a constant barrage of water between heat from the house fire and majestic trees surrounding the property.

A crepuscular ray pokes through the heavy smoke.