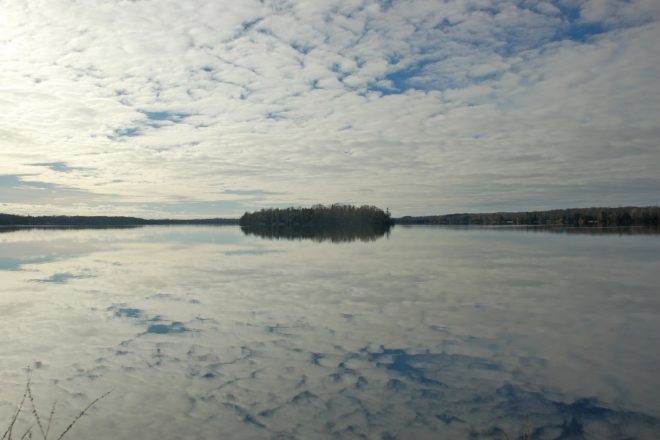 Fans of Kangaroo Lake had two great pieces of news at the annual meeting of the Kangaroo Lake Association at Baileys Harbor Town Hall July 7.

“You guys are to be commended for the work that you do,” Hoyman told the 50-some KLA members who showed up for the annual meeting, mentioning that many other annual lake association meetings he attends are often represented by only a handful of stakeholders. 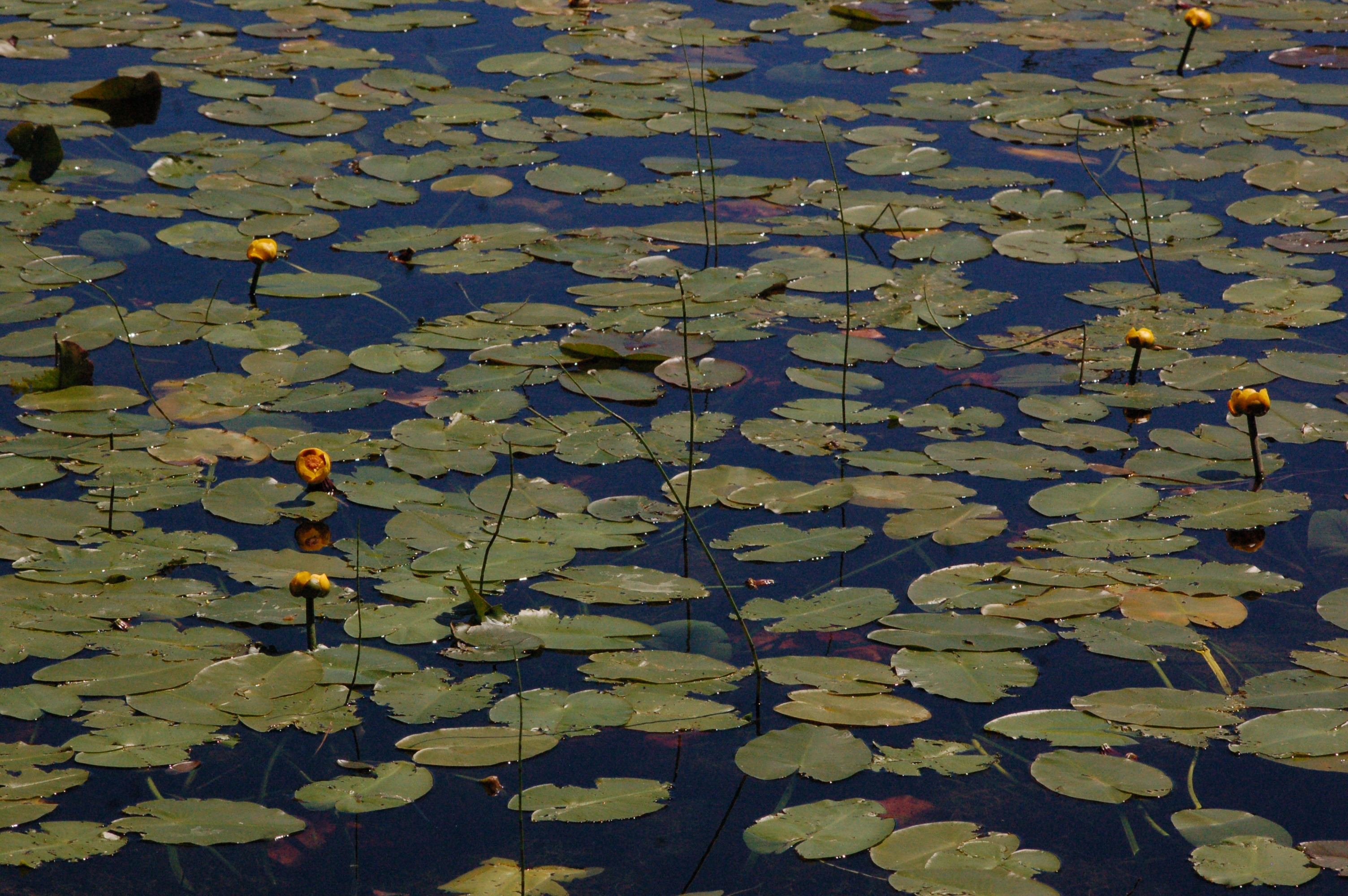 Water lilies blanket a section of the northern part of Kangaroo Lake. The latest study of the lake found it to have a healthy plant diversity for such a shallow lake, with the northern end slightly more diverse than the more developed southern end. Photo by Jim Lundstrom.

Hoyman explained that data collection for this latest study began in 2016 and went into 2017, adding that included lake chemistry, biota within the lake, and the sociology of the lake (the people side).

“It’s not just about science, but also how do people use the lake and what capacity have they to manage lake?” he said.

Hoyman described it as a shallow lowland drainage lake with a maximum depth of 12 feet, in a very large watershed (more than 10,000 acres) comprised mostly of agricultural land – but pasture and grassland rather than row crops that are subject to fertilizers that can result in phosphorus runoff into the lake.

“You guys have excellent water quality,” Hoyman said. “The positive challenge is to protect that the best way we can.”

He also described the water clarity as good to excellent, and better than most lakes of comparable size and depth. Water clarity is related to the amount of algae in the water, which is a byproduct of phosphorus. Unlike the majority of lakes its size, Kangaroo Lake is not plagued by too much phosphorus. In fact, Hoyman said they found 42 times more nitrogen in Kangaroo Lake than phosphorus.

The majority of that phosphorus deposited in the lake is from the atmosphere, Hoyman said, and the only way to prevent that from happening is to build a dome over the lake.

Hoyman said there has been a change in the fishery since the last lake management study in the early part of the century, changing from a walleye-dominated to a bass-dominated fishery. The Wisconsin Department of Natural Resources, which manages fisheries, determined the panfish population is stable in the lake, Hoyman said.

“This lake doesn’t have a whole bunch of energy to support a massive fishery. It can support a good fishery,” Hoyman said. 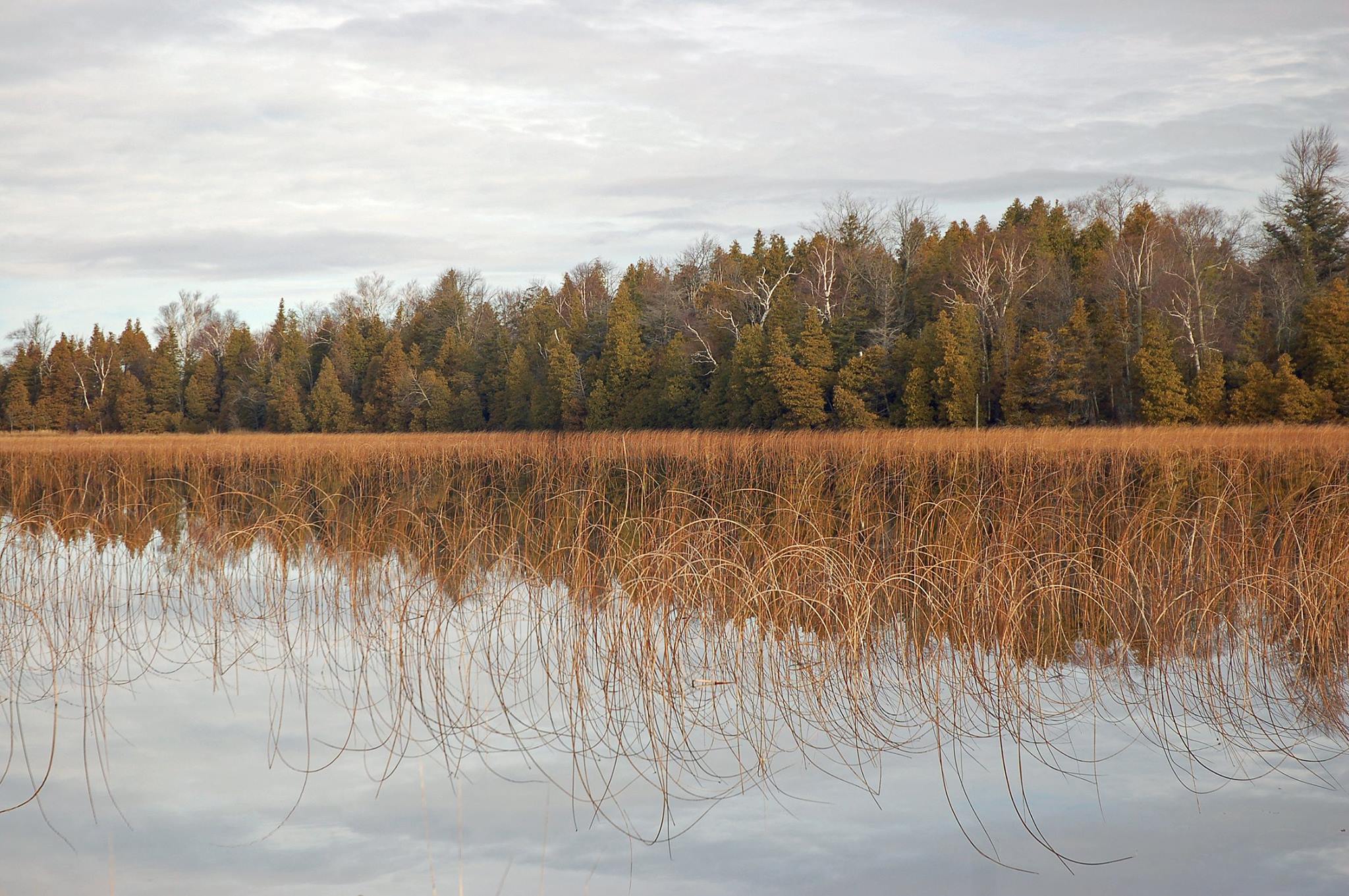 The lake was found to have a richness of native species – 28 species, with more diversity on the less developed northern end than on the southern end – and only one non-native species, the Eurasian water milfoil, which was first identified in Kangaroo Lake in 2016.

The non-native zebra mussels were discovered in Kangaroo Lake in 2008, but Hoyman didn’t offer much detail on the population, but said it’s something that needs to be monitored.

Hoyman also praised KLA members for the “fish sticks” program, where more than 100 trees, provided through a partnership with The Nature Conservancy, have been planted at locations around the lake to serve as woody habitat for lake and shoreline creatures and for promoting biodiversity.

“That habitat is very important,” Hoyman said of the fish sticks. “Woody habitat increases biodiversity. It adds cover and a base for the food network that’s there.”

He advised that the volunteer water quality monitoring that has taken place on the lake since 1980 continue, and he added that the citizen monitoring effort should be extended to Peil Creek, which empties into Kangaroo Lake.

He also said natural areas along the lake should be preserved and that highly developed areas should be restored to a more natural state, adding that there are grants available to help property owners restore natural vegetation along the shoreline.

For more information on the Kangaroo Lake Association, visit their website (kangaroolake.org) or its new Facebook page.